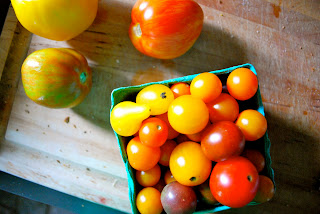 This is the month tomatoes storm the markets. Plump, rainbow-colored tomatoes complete with wrinkles and crags and warpy misshapen stems. Sweet as candy. I have eaten so many tomatoes this month—hungry for them always, trying to appease my craving before they’re replaced with the apples and squash of autumn.
I’ve roasted them, simmered them, sliced them and served them with mozzarella, basil and a sprinkle of salt.  I’ve eaten them in sandwiches and in salsas. But I’ve found myself coming back to the same recipe a number of times this summer: Francis Lam’s Perfect Five-Minute Raw Tomato Pasta. Generally, I cringe at recipe titles that use words like “perfect,” or anything resembling a superlative. But I’ll let this one slide, because Francis… this man doesn’t lie. 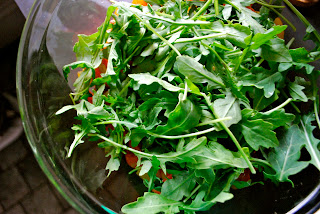 My father and stepmother came over for dinner last Sunday. It had been a crazy week, one in which time swung around and trickled away, warping and rolling like desert tumbleweed. Sometimes I feel like life is moving too quickly, and other times way, way, waaaaay too slowly.
In any case, I didn’t begin to cook dinner for my family until only a few minutes before they arrived. I chopped up the tomatoes, plunked them in a bowl. I topped them with a layer of arugula, and then one of thinly sliced red onion. I boiled the pasta and heaped it on top, letting it sit for two minutes to take the raw edge off the onions and just barely wilt the greens. I then tossed the whole lot with Parmesan cheese and piled it onto the waiting plates. Dinner was served. 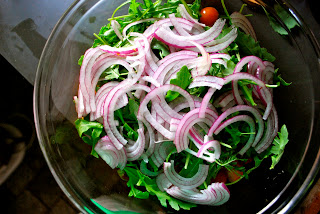 Francis Lam’s Perfect Five-Minute Raw Tomato Pasta
Serves 2 – 4
I used a combination of local red vine and colorful heirloom tomatoes for this recipe, as well as a pint or two of cherry tomatoes. The more colors the better; I like a rainbow of a dish. But if you don’t have a really great selection of tomatoes—ripe and juicy and sweet—I’d recommend making something else. The tomatoes make this dish.
2 ½ pounds tomatoes (the riper the better, colors are key)
2 loose cups arugula
Scant ¼ cup shaved red onion
1 pound linguini
Olive oil, to taste (your best kind)
Salt and pepper, to taste
Red wine vinegar, a glug or so
Parmesan cheese
Chop the tomatoes into ½ inch pieces and put them, with all their juices, into a large bowl. (A very big bowl.) Season with salt and pepper, and a splash of olive oil. Stir and taste. I added a splash of red wine vinegar. Francis says this is optional, but I love that added bright tang.
Bring a big pot of water to boil. Add some salt, and then the pasta. Stir.
While the pasta cooks, lay the arugula on top of the tomatoes, and then layer the slices of red onion on top of that.
When the pasta is done, drain it and dump it straight into the bowl. Leave it there, untouched, for 2 whole minutes. Grate the cheese while you’re waiting. Now, stir it all together, add the cheese, and taste for salt and pepper. Serve. 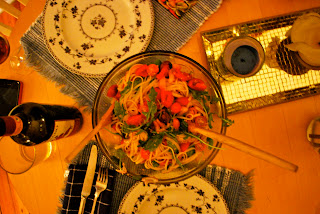 I love any excuse to eat summer tomatoes and this year Jim planted 2 rows of them. Luckily we only lost one plant from the hurricane. More salads and tomato sandwiches to come!

Thank you for this recipe! So healthy and delicious sounding. I think I would like to use a Gnocchi with it or perhaps some Orzo!

This recipe looks delicious. Thank you so much for sharing! Loved being on the phone listening to your words of wisdom tonight with Molly O'Neill. Cheers!

I love reading posts and realizing I have everything waiting for me in the kitchen. We enjoyed this for dinner tonight. Rich decided to change things up a bit and added some blue cheese to his. High marks and muted moans all around.

And congrats on the BPL and the London book tour. So cool!

Sharon, oh good, I'm glad you didn't lose all your tomatoes, the best part of August!

Murissa, I'm sure the flavors would be good with either gnocchi or orzo. I love linguini because you can twirl it around your fork and slurp it up.

Carrie, I loved talking with the folks on Molly O'Neill's roundtable. Glad you were there to listen.

I heard a rebroadcast of you and Leonard Lopate today. What an experience you endured! So glad you have recovered. I guess as they say "one door closes and another opens"!Please keep on writing and cooking.