They sky was still dark as Matt and I rode our bikes to Penn Station early on Monday morning. I watched the sun slowly rise over the Hudson while we pedaled down Riverside Park. The industrial buildings across the river looked soft in the trickle of early light. I wore a thin pair of black-and-red gloves that my mother gave me years ago; my fingers were numb by the time we hauled our bikes down the stairs that led to the Long Island Railroad.

Technically we are on “spring break” from graduate school, where both Matt and I are studying journalism. Unfortunately, as you’ve seen from my lack of activity here, there is very little break involved in a 10-month master’s program, no matter what the season. Thirty-six hours in Long Island would have to do it.

We arrived in East Hampton around 11 a.m., dropped our bags off at the Inn, and began to explore. It didn’t matter that the grass was brown and the trees gray. The windmill standing on a grassy plain off of Main Street was crisp against the cloudless blue sky.

The wind pushed against my puffy down jacket as we rode down Further Lane and gawked at the mansions overlooking the water. We parked our bikes and walked along the beach. I could smell the ocean. It was thick and salty.

That night, my face warm with the day’s resulting windburn, we went out to dinner at a nearby restaurant—which, I thought happily as we walked down the empty street, was probably the equivalent of 4 Manhattan-length blocks from our Inn. Then I realized that I was thinking in terms of Manhattan-length blocks, which disturbed me. As did my unfamiliarity with the sky’s blackness, as I’m so used to New York City’s perpetual light. Birds had been chirping all day; a stark contrast to the ambulance sirens and subway trains usually grinding in my eardrums. It’s been too long since I’ve taken a break, I thought.

We sat at a side table in the dining room of Della Femina, a graceful Italian joint filled with flickering candles and beige tablecloths. The food arrived on our table in unassuming combinations of the familiar yet interesting. A curried carrot soup with golden raisins, lime crème fraiche, and a drizzle of a spicy oil. Seared salmon with lemongrass syrup. Matt’s warm croissant bread pudding with white chocolate mousse disappeared quickly.

The meal meandered in a slow, even tempo. The simple act of sitting, sipping wine, and talking about subjects far from graduate school was delicious.

And now, back in the city, I am avoiding the Word document that holds the final draft of my master’s project. I am attempting to tune out the rocking bass of what I can only assume is my next-door neighbor’s perpetual dance party. It has been raining all day and I can smell its wetness, soaked into the brick outside my window. It’s thin and musty, very different from the ocean. 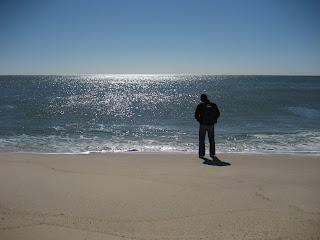