When I was small my family celebrated Christmas morning with sticky buns. Presented in a white cardboard box from the local bakery, they were fat and luscious with brown sugar frosting and crunchy pecans. I always ate mine in small bites, pulling them apart with my fingers at their seams.

Years later, when I was in high school, my parents split up. As a result many things changed. Among them, our holidays suddenly became disjointed. Many of our traditions—the tiny ones that we'd carved together beneath the tree, beside the menorah—were thrown to the wayside, now relics of the past.

Last week, however, I revived one. I wanted sticky buns for Christmas. This time, I made them from scratch. They were the first I’ve eaten in years.

I began the recipe, which is from Bon Appetit, on Christmas Eve at my mother's house in Boston. I let the dough rise while my mom, her boyfriend, my brother and I ate dinner--sharing a lasagna with spinach and ricotta, salad with pomegranate seeds and pine nuts, and lots of wine.

I kneaded the soft pillow of dough at 11 pm, giggling in the hazy glow of a glass of Burgundy. I rolled the dough into rectangles, brushed it with butter and spice, and then wound it into two tight logs. After cutting each one into tiny rounds, which curled like snails, I placed the buns into cake pans coated with a thick brown sugar glaze. Then I let them sit in the fridge overnight. 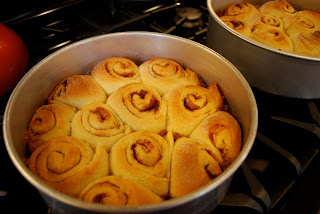 I came downstairs before anyone else on Christmas morning, the kitchen awash in a pink post-dawn light. I took the pans out of the cold and let the buns rise on the counter for a second time. Then I stuck them in the oven as my family slowly made their way to join me by the tree. Soon, the house was filled with a sweet yeasty scent, one of hot cinnamon and sugar.

Later, we ate the sticky buns while sitting on the couch and washed them down with glasses of champagne. They were fleshy, flaky and warm. The rich caramel glaze hung over each hump of baked dough like snow. They were just as I remembered. Actually, they were better. 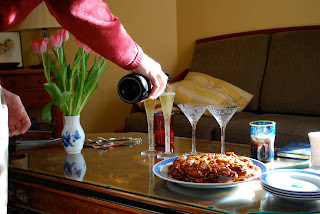 Mix warm water and yeast with a pinch of sugar in a small bowl. Let stand until foamy, about 8 minutes. Using electric mixer, beat remaining sugar, butter, milk powder and salt in a large bowl until well blended. Beat in eggs one at a time. Add yeast mixture, and then 3 cups of flour, one cup at a time. Using a rubber spatula, mix in final cup of flour, scraping down the sides of the bowl frequently. The dough will be soft and sticky. Sprinkle the remaining ¼ cup flour on the counter and knead dough until smooth and elastic, adding more flour as you go until no longer sticky, about 8 minutes.

Butter another large bowl and put the dough inside, turning to coat. Cover the bowl with plastic wrap and let rise in a warm area, until doubled, about 2 ½ to 3 hours.

Butter two 10-inch round cake pans with 2-inch sides. Beat brown sugar, ½ cup butter, honey, golden syrup, and ¼ cup water in a medium bowl to blend. Spread half of the glaze in the bottom of each prepared pan. Sprinkle 1 ½ cups pecans over each.

Punch down the dough. Divide in half. Roll each piece out on a floured work surface into a large rectangle, about 12 by 9 inches. Brush excess flour off of the dough, and spread the remaining butter over each rectangle, dividing equally. Mix the four teaspoons of sugar and cinnamon in a small bowl. Sprinkle it over each rectangle evenly. Then, starting at the long side, roll each rectangle up into a log. Cut each into 12 rounds. Place 12 rounds, cut side down, in each pan, spacing evenly. Cover with plastic wrap.

Preheat the oven to 375 degrees. Bake the buns until a deep golden brown, abut 30 minutes. Run a knife around the edges to loosen the buns, and then turn immediately over on a platter while still hot. Serve and enjoy. 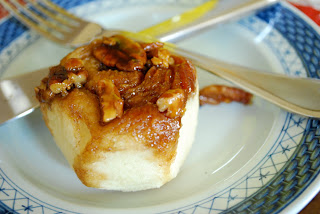