On a cold morning in March of last year, Matt and I rode our bikes down the West Side of Manhattan. We pedaled from his apartment on the edge of Harlem to Penn Station, where we hopped on the Long Island Railroad. We were escaping the city for a few days, on spring break from graduate school.

I watched the sun rise over the Hudson as we passed through Riverside Park. It was early and I was hungry. We hadn’t had breakfast and my fingers, in too-thin cotton gloves, were numb. But I remember feeling content. I was on vacation and going on a trip. I was entering the final months of a master’s program that I found both challenging and fun. I had borrowed my roommate’s bike and relished the smooth sound of tire on pavement. And I rode next to Matt, whose brown hair was long enough to poke out from under his helmet and who, everyday, I grew to love a little bit more.

When Matt and I had first met, six months earlier, his hair was still short. He had it cropped close to the skull, reminiscent of his life before Journalism school: as an officer in the Army.

I knew about Matt’s past. I listened to his tales of studying as a cadet at West Point, of being stationed as an officer in Germany, of spending 2 years fighting in Iraq. But it was a foreign world to me, and difficult to imagine much beyond his words. When we met, the sand storms of Ramadi were thousands of miles away. Matt’s uniforms and combat boots were packed in boxes at his parents’ house in Tennessee. He wore jeans and T-shirts. His hair was soon long.

We rode our bikes quickly, gliding down 8th Avenue with wind at our backs. I followed as we weaved among cars and stopped at red lights. When we passed a large truck, double-parked on the west side of the street a few blocks above Times Square, Matt turned his head back towards me.

The scent of diesel permeated the air. It reeked of gas and metal and didn’t leave my nose for a few wind-swept blocks. For a brief moment, breathing in those thick and noxious fumes, I could imagine a world far away. One of sand and stone, heat and violence. One that smelled of fuel.

I told Matt about that moment on our bikes, late one night last week. I sat at our kitchen table while he stood nearby. We were drinking wine and talking about the war. My head felt encased in a cloud and I couldn’t breathe out of my nose. The wine tasted vague and sweet; the grape fell flat on my tongue.

A few days earlier Matt had received an envelope in the mail. It held a packet of papers: orders from the Army, written in a screaming capital-letter font. He’s been called back into service and will soon deploy to Iraq for his third tour of duty.

When he first told me we were sitting on the steps of our apartment building, one night after work. I immediately thought of that truck. Of that smell.

It was a scent that Matt knew well by the time he returned from his first tour.

“Iraq smells of diesel exhaust and human waste,” he said. “It’s like nothing else.”

Even between deployments, the scent was never far from his mind. Matt lived in Germany and would pick up whiffs here and there. But when he went back to Iraq for the second time, two years later, and he breathed in the burning oil, the gas, the waste and the sand it hit him hard. He immediately remembered things that had happened before, things that he hadn’t thought about since he last stepped foot in that country, things that happened back in 2003, when the US first surged into Iraq.

“It felt like I had never been gone,” he said, leaning against the kitchen counter.

Matt told me about the mornings in Iraq. Away from the baking sun the temperature would drop. The sun would rise, pink over the horizon. He would see birds flying into the palm groves near his base. The scent was still there, but it was better in the coolness of dawn.

“It was beautiful,” he said.

I listen. I try to imagine what it’s like. But sometimes words just aren’t enough.
Posted by Molly at 8:18 AM 2 comments: 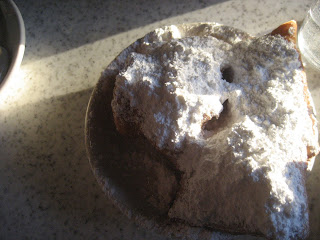 A cloud of powdered sugar at Cafe Du Monde in New Orleans, where Matt and I spent Mardi Gras weekend. 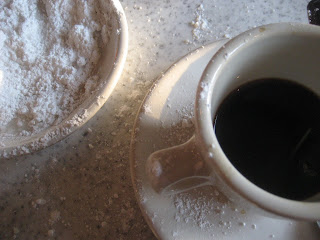 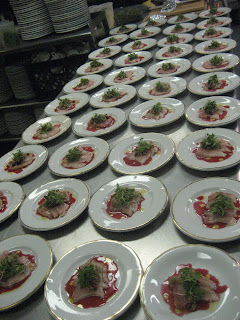 On Friday morning I took the train out to Brooklyn, near where I used to live, to help my friend Ben in the kitchen. He occasionally sidelines as a chef, and we've worked together in the past. He was preparing for his most recent gig: an 80-person dinner party.

We cooked in the large, professional-style kitchen of the building where Ben holds his day job. I wasn’t there for long because I had to head off to an interview, but he remained the rest of the day, and the next.

Ben moves with confidence in the kitchen – bending over the stove, tasting sauces from steaming pots, maneuvering sharp knives as he fillets large cuts of fish, which are riddled in pink and red. I was not nearly so comfortable. It’s been a while since I last cooked under pressure, or for a group of more than 4 or 5. It’s been a while since I was last in a kitchen larger than the size of a breadbox, period. There, in the bright room that smelled of swordfish and lemons, the knife in my hand felt heavy and awkward. The pots were ungainly, and the stove, too hot.

I didn’t do a whole lot that afternoon. I pitted a crate of dates and helped to churn some ice cream. I seasoned ricotta with lemon zest, nutmeg, and salt. I poured a heavy-scented pot of garlic confit into plastic tubs to store. When I left, a couple of hours later, I took a deep breath. Everything felt unfamiliar.

I walked back to the subway on a street lined with brownstone apartments in Park Slope. I used to walk that way everyday, back when I lived in the neighborhood. The buildings are uniform in their russet-colored brick, locked together like a row of soldiers at attention. There is one block, however, where something is different. I had forgotten about it in the year and a half since I had moved. But walking by on Friday, I recalled: There is one building, toward the end of a block, which is painted a bright, screaming pink.

I stopped in front and smiled. I had forgotten about the pink.

A few years ago, on a Saturday afternoon in the fall, I strolled down this very block with a few friends, on our way home from Prospect Park.

“Why would someone paint their house that color?” a skeptical friend asked when we passed the home.

“The people who live there must be crazy,” he concluded.

Secretly, though, I loved the house. It reminded me of summer and, perhaps, my childhood fascination with flamingos. Sometimes I even went out of my way to walk by its birthday cake-like exterior. It made me smile when I passed.

But this last Friday, heading away from the kitchen, I was surprised by the vivid pink. It didn’t seem right, bursting in color there in the leafless cold of a New York winter. It looked strange and slightly awkward. Like the way Ben’s chef knife had felt in my hand a few minutes earlier.

I walked through the farmers market in Union Square yesterday morning. I was on my way to work, and wanted an apple to eat on the way. I passed candles and yarn, fresh eggs and loaves of bread. I passed plastic-wrapped slices of banana bread and vacuum-packed cuts of lamb. I stopped at one of the many stalls selling apples. There were long tables covered in boxes of fruit: green, red, and yellow. The air smelled of hot cider and of smoke, wafting up from a nearby cigarette.

I took a bite of a Macintosh as I walked west towards the subway. It was tart and sweet and my fingers soon grew numb. As I walked, I realized that I could also smell something else. It was something familiar, yet unknown, something biting and faintly metallic. Perhaps it came from a trashcan, overflowing on the sidewalk. Perhaps it was the exhaust from a taxi driving by. Like many new smells for me these days—smells that are there but not, recognizable but unknown, and perpetually on the tip of my tongue—I just couldn’t figure it out. Perhaps, I thought, it is just the scent of cold.
Posted by Molly at 11:57 AM 1 comment: