Lately I’ve been taken by spice.

I linger at the shelf of spices in my apartment, opening each bottle and inhaling. At home in Boston for New Years, my mom’s collection of vanilla beans was captivating; the paprika she brought back from Hungary, titillating. I find myself choosing recipes based purely on the pungency of their individual flavors.

My ability to detect the scent of spice isn’t remarkably new. I remember in the days after the accident when my father would hold bottles of curry or garlic powder or nutmeg under my nose and ask imploringly if I could smell anything. Nothing registered for months; each bottle filled with a monotone nothingness. But within a year that began to change. My sense of smell has been returning at an especially rapid rate for the last 6 months or so. The spice rack has registered for a while; I’m not sure why it’s suddenly consumed me.

Perhaps it is for scientific reasons: I recently spent a day at a Taste and Smell Center in Philadelphia for a project that I am working on. A doctor there told me that there was a scientific study in Germany which showed that those who sniffed spices each night before bed over time improved damaged senses of smell. Practice makes perfect.

But, really, my spiced obsession is less of a conscious decision to spruce up my olfactory neurons than the simple desire to feel alive. And detecting the cinnamon twang to a cup of coffee or the subtle wash of red wine in my mom’s braised short ribs gives a depth to my experience that is new and exciting. I used to revel in the fact that I couldn’t smell skunk, spoiled milk, sewage, or any of the many facets of New York City’s rancid summers. My friends said I was lucky. But even those, I suppose, are exciting in their own way.

So now I'm obsessed with my spice rack. How fitting, then, that I recently discovered Ana Sortun’s cookbook: Spice, Flavors of the Eastern Mediterranean.

I spent an evening at Sortun’s restaurant, Oleana, last week when I was in Boston to do research and reporting for my mater’s thesis project. She twists western techniques with Middle Eastern cuisine to create a modern menu both comforting and innovative. Her food is filled with new and unfamiliar flavors. Her cookbook is organized by spice. I love it.

I made her Spicy Fideos with Chickpeas, Kale, and Lemon Aioli this weekend. Toasted angel hair pasta is broken into small pieces and cooked in a concentrated sauce made from tomatoes and cumin, vanilla beans and bay leaves, ancho chili peppers and cocoa powder, saffron and cinnamon, chickpeas and kale.

The complicated flavor combined the scent of spices, the feel of spicy, and a texture both soft and defined; it was an exercise in smell and taste. And so good I had it for breakfast the next day as well. 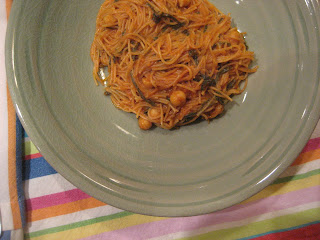