Matt was waiting for me when I emerged from baggage claim at the airport in Warsaw, Poland, late on the final Saturday afternoon of October. He had arrived on his own flight from Afghanistan, by way of Kuwait, only a few hours earlier. He looked tired under the harsh fluorescent lighting of the lobby. He wasn’t in uniform, which surprised me. We hugged for a long time, and his skin smelled exactly the same.

Matt had two weeks leave from Afghanistan and we spent them together in Eastern Europe. When we first began to plan the trip, we contemplated “normal” destinations like Hawaii or Costa Rica or even New York. But, in the end, we decided on an adventure: One far from the heat of the desert; one close to a history that fascinates us both. “I just really want to see fall,” Matt had told me on the phone. 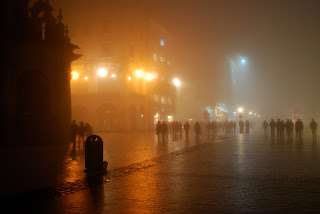 We traveled through the foggy chill of Poland, Ukraine, Romania and Hungary over the following two weeks. It was a challenging trip, and a wonderful trip. We learned a lot about the land, and about each other. We rode a rickety bus through the countryside of Ukraine, descended deep into a cavernous old salt mine, and stood solemnly on the grounds of Auschwitz as the sun sank in the sky beyond the electrified fences and barbed wire. We sampled bright purple borscht in almost every city we passed and even made it through a bowl of tripe soup laced with sour cream and garlic at a pub in rural Romania. We walked among castles and monasteries and farms. We drove a tiny car through Transylvania and bought honey on the side of the road. We slept on a number of trains as they bumped over borders, sharing loaves of bread and tiny bottles of vodka along the way. The smells—of steamy trolleys, of sizzling meat, of human and animal and streets—were so strong I vacillated between feeling joyous and physically ill. We saw big things and small things, both expensive and cheap. I found I liked the simple best. 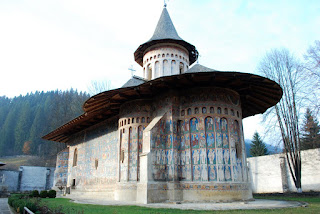 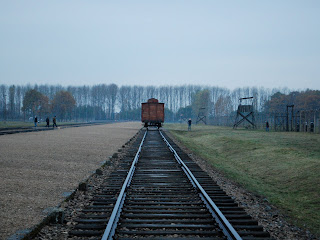 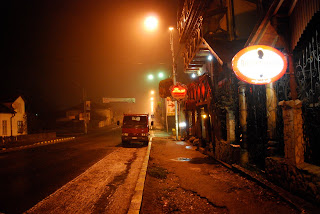 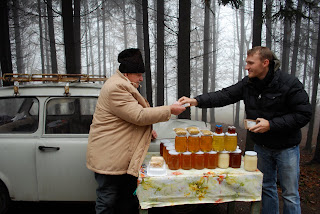 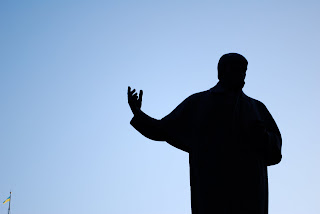 One evening in Krakow, Matt and I settled side-by-side on a wooden bench against the wall of a basement jazz club in the city center. He put his arm around my waist and we sipped thick tumblers of whiskey. Amid the swirls of Polish and clinking of glass, we listened to gray-haired men rock out on trumpets and trombones, a base guitarist who hardly moved and a drummer whose face gyrated with every beat. It was warm and smoky and sweet.

When the show ended, we were starving. We emerged outside to be hit by a gust of frozen wind. I immediately began to shiver and we moved quickly, jogging across intersections, only occasionally pausing to peer at our map. After ten minutes we reached a big blue van parked on the side of the street.

In front of the van stood two men bundled in thick hats and coats. They manned two large metal barrels, which glowed with the lazy jump of flames. Within, they cooked dozens of kielbasa, thick curvy sausages lined up on poles. For seven zloty, or about $2.50, we each received a piece of meat, a splotch of mustard and a crusty white roll on a thin cardboard sheet. A snap to the slightly burnt skin gave way to tender flesh within. We ate them standing at a makeshift wooden table with plastic forks and knives alongside a handful of other silent, hungry men. Walking back to our hotel close to midnight, Matt’s arm linked with my own, I finally felt warm. 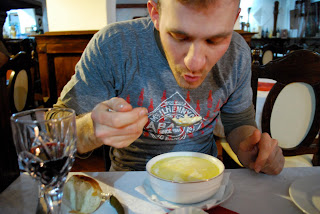 You can read more about our trip here.
Posted by Molly at 1:31 PM 7 comments: