I have spent a lot of time lying on my back, on the floor of my apartment in the last few days. My new apartment. My new, sunny apartment that, after a long, sweaty day hauling boxes and bed frames up and down its stairs, has wreaked havoc on my back.

But I am here now. And lying on the (new, wooden) floor feels best. Right next to the bright red wall which Adrienne, my new roommate, painted while I sat nearby and provided moral support, wine, and select passages from a Robert Moses biography, my current 1200 page challenge. (The wall matches my red kitchenaid mixer perfectly, which happened on purpose.)

I have relocated from Park Slope to Prospect Heights in Brooklyn. Not too far away, but closer to an express train that will zip me away to grad school (beginning in just about two weeks!) with far greater ease.

Cooking has yet to happen here. But late on Saturday night, after a long and sweaty day lugging dressers and bed frames up and down multiple sets of stairs, Adrienne and I sat in our new living room, surrounded by suitcases and boxes—she in a pink armchair and I on my rolling desk chair—and fashioned a table from some (of my many) boxes of books. I had blown through the farmer’s market early that morning to pick up some initial groceries for the new place and bought a pizza-like concoction – rosemary, roasted garlic, caramelized onions and blue cheese on a freshly baked round of bread – from a slim, tanned man with a delightful French accent. It came out in all its crusty, yeasty glory around 9pm, alongside a few frosty bottles of Brooklyn Brewery Brown Ale. I was loopy with exhaustion, covered in bruises and bumps, already stiff and sore, and could not have been happier. The chocolate ice cream that followed, spoons straight in the container, also helped. 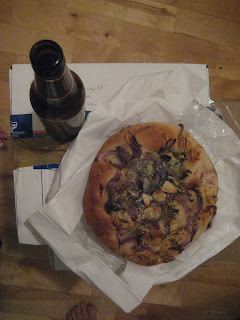 The Best Kind of Sandwich 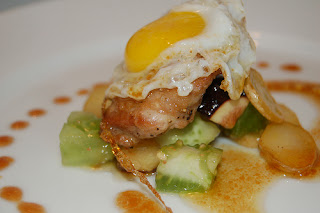 “I am now on the quail bandwagon,” said my brother seriously, the sleeves of his blue button-down rolled up to his elbows. A white plate so clear it could have been licked clean lay on the table in front of him; it once held a salad of pickled green tomatoes, fresh figs, and fingerling french fries underneath a seared quail breast, topped with a fried quail egg and pomegranate molasses. Coming from a guy who wouldn’t eat anything but white food (vanilla yogurt, plain pasta, etc.) for the majority of his childhood, this was big.

The business man seated across the table—distinguished gray hair and a black polo shirt; a glass of delicate rose in hand—nodded in agreement. “I don’t often like dishes that incorporate eggs like this, but it worked wonderfully.” His wife, an artist, was smiling and talking to the photographer a few seats down. I could hear an excited conversation running about a recently opened gastro-pub in Brooklyn. The apartment's light was diffuse and warm; meat sizzled behind the cobalt blue curtain separating the diners from the kitchen. Wine glasses clinked and a peel of laughter erupted from the next room over. 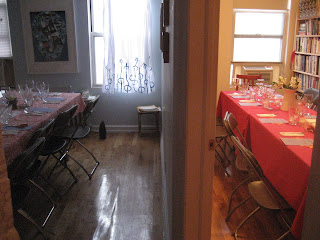 This past Friday was the third event of the Brooklyn Food Group, a“roving supper club” that I began with a few friends in April. Twenty-two people—a group ranging in age and profession and including my wonderfully supportive brother and two of his friends—were gathered in an apartment in Cobble Hill, partaking in our five course meal. 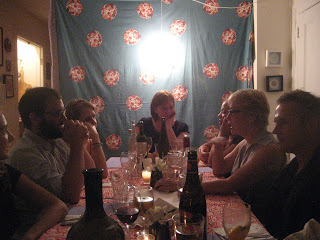 Ben, our chef, outdid himself with the savory courses: it began with a riff on ratatouille (red pepper puree, fried squash blossoms filled with a cinnamon ricotta, eggplant caponata); then a snapper cerviche with jicama, peach, red onion and coconut alongside a mini fish taco; a fresh pasta course with peas and pesto; and then the quail.

As pastry chef and official bread baker of the establishment, I spent a good part of last week playing with sourdough starters and cookie doughs. Fragrant loaves of Italian bread and a rosemary focaccio emerged from my oven early that morning. 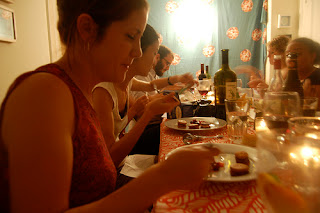 In retrospect, creating these elaborate ice cream and cookie combinations to feed so many was perhaps a bit much and the process was not without some stress (who knew things could melt IN the freezer?). But I was proud of the end result: four little sandwiches—varying in color and texture, all contrasting a creamy cold with sweet crunch—lined up on the white plates, balanced next to a small berry salad, and popped into mouths by hand.

It was fun, successful night; it reminded me, again, of how much I love to cook and how addictive the adrenaline of the kitchen can be.

Some great photos from the event are on flickr here and here.

My favorite of the sandwiches was the saffron-butter cookie with a pistachio-cardamom ice cream. The ice cream, however, is great straight up out of the freezer.

Add sugar to 1/2 cup of water in a heavy pan and heat slowly until the sugar is dissolved. Bring to a boil and cook the syrup for five minutes. Set aside to cool. Add evaported milk, cardamom, nuts, and cream.

Freeze in an ice cream maker, according to the manufacturer's instructions.

I could smell my brain

I was sitting in my bed with a bottle of water and stack of books by my side. My left leg, encased in a bulky metal knee brace and layers of bandages, extended limply in front of me. My mom stood at the doorway and stared at me blankly.

“Your… brain?” She started to laugh and then stopped; she looked confused.

“I can,” I said. “It’s always there, whenever I exhale. A smell. A noxious, earthy smell.”

“I’m not sure it’s possible to smell your brain,” my dad, a doctor, said when I told him later that day. But I chose not to believe him. I liked the smell of my brain—woodsy with a slightly smoky backdrop; it reminded me of a hike I once took in Vermont in the fall, red leaves crunching underfoot.

“That’s awesome,” said my little brother, at home for a weekend from college. “My sister can smell her brain.”

It had been five weeks since I was hit by a car and fractured, among other things, my skull—an injury that resulted in severed olfactory neurons and the loss of my sense of smell. Just out of knee surgery, I couldn’t walk and would be in bed for weeks. I felt wild and slightly out of control, my mind looping every which way on pain medication and my own dosage of home-grown denial. I wouldn’t let myself think about what had happened. I did not quite believe it was real.

Later, I learned that those who lose their sense of smell due to head injury often experience what are called “phantom smells”—pungent yet nonexistent scents, often foul—constantly humming in their olfactory consciousness. My brain-scent was the first of any kind I had experience since the accident and though not unpleasant, was certainly phantom. After five weeks experiencing only the heat of a once nutty coffee, the gelatin slickness of a once rich chocolate pudding, and harsh saltiness of once ripe parmesan cheese—this scent, brain or not, felt wonderful.

It lasted only a few weeks, gradually petering off and leaving me with the familiar nothingness of a scent-less world. I soon forgot about it, as I have forgotten about much of those first painful months of recovery, letting them fall quietly away to the hazy perch of repression in the back of my mind. But I was reminded of it the other day while walking down a dirt road in rural Pennsylvania with my mom on a long-weekend trip, and was suddenly hit with a pungent woodsy smell. A smoky backdrop. Someone, perhaps, had built a fire.

“Remember when I was so sure I could smell my brain?” I asked.

“Yeah,” my mom said with a little laugh. “That was weird.”

I haven’t had any phantom smells since. But barreling into the heat of this summer, I’ve started to wish that some of them were. The Second Ave subway stop on the F train? I would hope, for my companion commuters especially, that the odor that washed through the open train doors was a figment of my olfactory imagination. Unfortunately, I hear, it is not.

I’ve been hit with many new smells lately. Or if not new, with an intensity I’ve never before experienced, which sometimes border on ferocious (like the red snapper that lived in my nose for days after it was seared and consumed in my kitchen). I think part of this is simply due to the fact that I am, to be blunt, happier. In the little over a week I’ve had off since my last day of work I have experienced more new, strong smells than in the last two months combined. Cilantro hit me over the head while chopping for a salad; cantaloupe’s sweetness shimmered from five feet away; the subtle jasmine of my mug of tea poked its head into my exhale; a man’s cologne—sudden, vividly ex-boyfriend—appeared on the subway. It’s mysterious and intriguing: my mood plays a heady roll in the inner workings of my nose.

As a result, the city is changing. Last summer, only a year post-accident, New York was a blank, sunny slate. The cement sidewalks were warm; beautiful glistening people in high heels or double breasted suits strutted along Madison Avenue near my office. The breeze, as I walked through Central Park’s groups of chattering pedestrians, was warm. It was a humid, sweaty world—but one that spoke to me purely through the visual. The parks were green; the buildings were tall and shadowy, windows shiny; subways were dark and sometimes crowded; my apartment was bright and serene.

I forgot that scent changes all that. The trains, especially, are bastions of smell. Summer subway rides are rich, cloying—discomfort runs off the backs of passengers with odors that stick to my face, hair. It’s hard to shake that barrage of body, especially because its presence is as yet so unfamiliar. The parks carry a twang of smoke, whiffs of tree and flower, the liquid waft of water, drifting coal and grill, roasted nuts. The streets are filled with surprises—rotting trash! coffee beans! Even the department stores call to me with the cool scent of air-conditioning, their subtle olfactory ploy.

Often when I walk around the city, dodging tourists and business men, cars and vendors, I retreat into my mind. My mom, who does the same thing, calls it “tunnel vision”—we are oblivious to the world, lost in our thoughts. But these days I am often tugged suddenly out of my mind and into the world around me with unexpected scents—some good, some bad—but always in that moment, there. I notice more; I concentrate more.

New York—though never staid—has become a more vibrant city. This new influx of smell irks me (try smelling nothing but red snapper for two day straight), excites me (who knew the fountain in Bryant Park smells like my old summer camp?), and fills me with hope (the calm scent of a man’s deodorant, previously undetected, on a lazy Sunday afternoon.)
Posted by Molly at 10:42 PM 6 comments: