For much of this summer I’ve been running on adrenaline, speeding along from event to event, reading to discussion to book club, and always to day job, day job, day job. 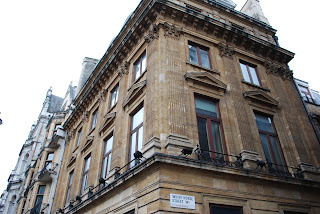 London threw me for a loop, though. The jet lag on top of the running on top of the events on top of the day job… and then a wedding in Maine and a baby-naming in Cambridge and a trip to Philadelphia… all within the course of one week? Stick a fork in me. 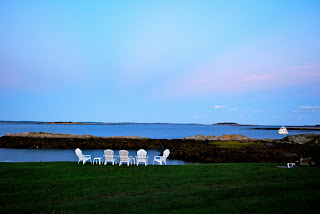 But of course I’m not done.

Today I'm looking forward to an event at Stir, a demonstration kitchen and cookbook shop run by Barbara Lynch here in Boston. It’s an open house, from 12 – 2:30pm today, and if you’re in the area, you should definitely come, because I’d love to meet you. And then on the 10th I’ll be in New Orleans, one of my favorite cities on earth, to talk even more smell at the Garden District Book Shop. And on the 13th, I’ll be at the Peabody Institute Library in Danvers, MA. For more, see the events page on my website. 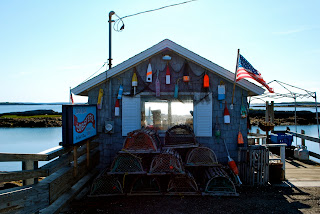 Oh, and here? I will write more, better, soon. I promise.

I’ve been trying to figure out what to write. I could write about the wedding I attended in Maine. It was on an island near Brunswick. We watched the bride and groom exchange vows as the sun set over the lagoon. Or I could write about the joy of meeting the new baby daughter of a good friend in Cambridge. Or I could rewind even further and write about London, and that lovely yet short trip during which I played the tourist, ate some excellent Lebanese food, and spoke a lot on the BBC. Now that I think of it, one moment there really stands out. 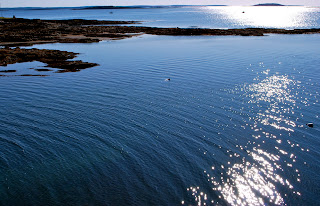 Late one afternoon, I walked alone from my publisher’s office in Notting Hill back to my hotel in South Kensington. Despite the warnings I’d received before my trip, the weather in London was nice. The sun shone bright on streets of red brick buildings. As I walked, I listened to the sounds of people speaking with accents only familiar to me from movies, to buses rumbling their double deckerness over the wrong-way roads. I had a few hours to kill and let my mind wander. Amid the errant musings on clotted cream and Marmite, I thought about how far I was from home, how strange it felt to be there, how wonderful and exhausting and insane. I was in a different country, an unfamiliar city. But there I was, meeting people who were moved by the same books and the same words, people who could all be transported by the same smells. I know this sounds trite. Or silly. Or sad. But in one moment it struck me how small the world really is. And how incredibly, unforgivingly large. 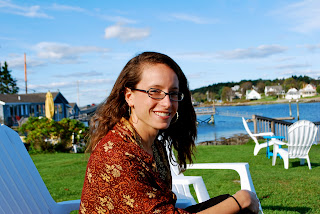 Anyway, I’ll leave you with a recipe. Because those have been severely lacking here in the last few months. (This sad fact is something I plan to change.)

Friday night I arrived home from work and grocery shopping pretty late. I didn’t start cooking until 8:30pm. But I was determined to use a recipe from Cook’s Illustrated, because I read Cook’s Illustrated recipes all day, and they often stick to the meaty part of my brain. I had been doing research on the effects of salt on vegetables and had become fixated on this recipe for Pasta alla Norma, a chunky eggplant tomato-based sauce that takes to rigatoni like a hug. 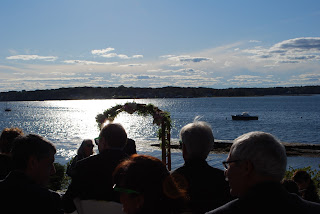 I sipped some whiskey (because I love a good whiskey) as I took out my knife. After the application of salt and a stint in the microwave, I watched the diced eggplant release its liquid. Browned in the pan, and then removed, the spongy vegetable turned out soft and flavorful...not at all waterlogged. The sauce came together with minced garlic and anchovies (which are salty and meaty and not fishy at all), and crushed tomatoes from a can. First came basil, then pasta, then cheese. Matt and I ate while watching an old episode of The Sopranos. It was everything I hoped it would be. 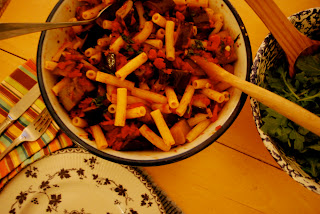 Pasta alla Norma
Adapted from Cook’sIllustrated (also known as: my place of work)

First, place the diced eggplant in a medium-sized bowl and toss with 1 teaspoon of salt. Then, line a microwave-safe plate with coffee filters. (The filters will absorb more of the eggplant’s excessive moisture than, say, a paper towel). Place the eggplant on the plate in a single layer, and microwave on high power for about 10 minutes. The eggplant should be dry and kind of shrively. Let cool a bit.

Now put the eggplant back in the bowl and toss with 1 tablespoon olive oil. Heat another tablespoon of oil in a large nonstick skillet over medium-high heat. Add the eggplant and cook until nicely browned and tender. This should take about 10 minutes. Be sure not to stir too frequently, or the eggplant will break apart. Once cooked, remove the eggplant from the skillet and set aside.

Add another tablespoon of oil to the skillet along with the garlic, anchovies, and pepper flakes. Keep the pan off the heat for 30 seconds or so, using the residual heat to cook these delicate ingredients very lightly, not allowing them to burn. Then set the skillet back over the burner and add the tomatoes. Bring to a simmer and let cook for about 10 minutes.

Meanwhile, bring a big pot of water to boil. Add salt (2 tablespoons or so), and cook pasta until al dente. Reserve a half-cup of pasta water before draining the pasta and then placing the noodles a big serving bowl.

Add the eggplant back to the skillet filled with sauce, and stir gently. Let simmer for 3 minutes. Now, add the basil. Season to taste with salt. Add the sauce to the pasta, and stir to coat. Drizzle a glug of olive oil over the top if you like. Serve, sprinkled with a healthy handful of cheese. 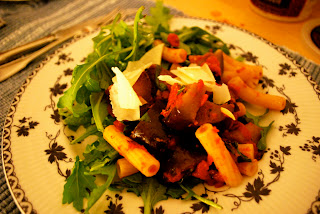 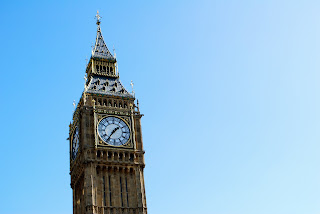 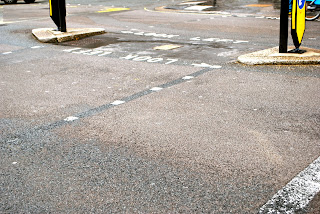 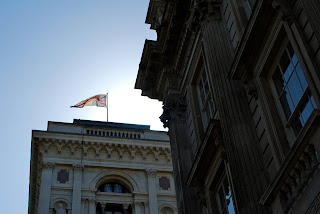 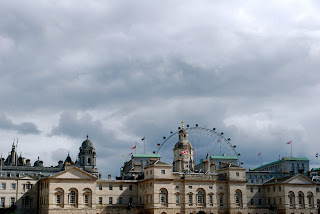 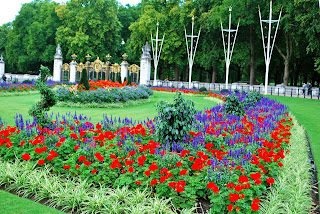 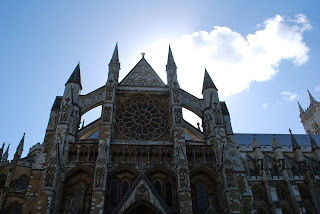 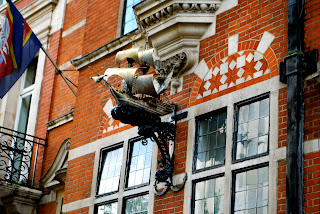 I walked to work this morning, a long stroll through the lifting fog. It’s been a hazy week of rain. The moment I left my apartment and shut the door behind me, I could smell burnt toast and musty rug. Outside, I smelled the lingering rain on the sidewalk, a whiff of the Dove conditioner in my hair. As I walked, there was a hint of earth and dead, early-autumn leaves. A hot metal twang to the subway car rumbling by. I could smell the flowery perfume of a woman on her way to work, the coffee from a café with an open door, and the familiar wet scent of a dog who had just rolled around in the grass. I fly to London tomorrow. I wonder what smells that will bring.
Posted by Molly at 4:57 PM 4 comments: 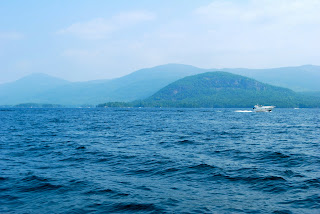 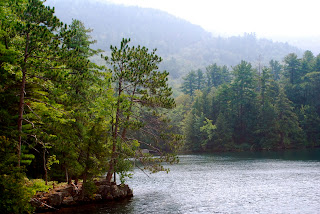 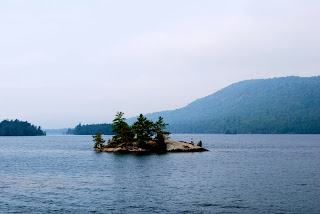 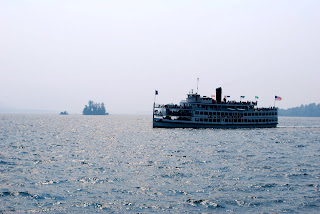 Labels: a weekend at lake george, drinking mojitos, reading novels, wondering why i do not like to swim but whenever i am near the water i feel like i am home
Newer Posts Older Posts Home
Subscribe to: Posts (Atom)