This afternoon my apartment-mate Jon and I left the haze of a quiet Sunday at home to go on a very important journey. We emerged from the subway in the wilds of lower Manhattan and walked a few blocks over to Essex Street, constantly speckled with rain despite a bright sun peaking out from behind the clouds. We made a beeline for the pair of weathered, 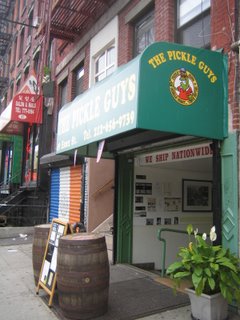 wooden barrels we could see perched outside on the sidewalk. They were in front of a bright green awning, emblazoned with yellow block-letters: The Pickle Guys.

We were on a quest for pickles. And we were in the right place.

Walking into the small open store room I was immediately hit with the briny, savory scent.

Can you smell that? Jon asked, laughing a little at my dumbstruck face.

My God can I ever. I was surprised with the intensity of the vinegar and garlic registering with my olfactory neurons. I could practically taste the odor, just standing one step in the store. 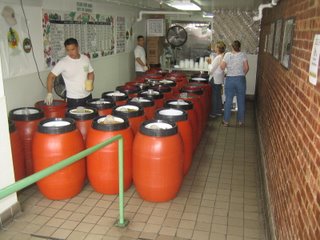 The Pickle Guys have one room, filled with uniform orange barrels and laden with pickled things. Pickled everything. The pickles themselves (new, sour, hot) were a range of greens – from vibrant spring to muddy earth. The pickled tomatoes floated nearby in their vinegary baths – small oval boats of red and green. Barrels of olives (green, greek, kalamata, stuffed with garlic or jalapeno), peppers (jalapeno, pepperoncini, cherry and sweet), soft white mushrooms and transparent pickled celery, vats of sour kraut and horseradish filled the room. 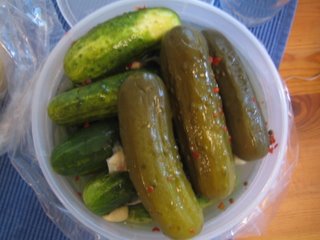 Jon and I have similar taste buds. We share a passion for mustard, ginger, pickles. Between the two of us (and I'm talking solely in the last seven days) there have been four batches of beets roasted in our kitchen’s oven. And this was a week in which the thermometer never seemed to dip below 90. How lucky that we understand each other’s culinary insanity. And can bond over trips to the pickle mecca of New York City. 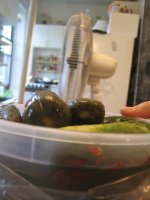 our pickle to eat as we waited for him to load up our half gallon bucket with an assortment of pickle varieties. It was crunchy with a perfect sour bite. 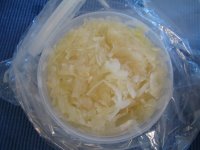 After a quick stop at a nearby kitchen supply store we made our way back to Brooklyn – Jon carrying the load of pickles and (smaller) container of sour kraut, me with a newly purchased muffin pan (which I desperately needed, of course).

This evening pickles were consumed. Beets, too. Perhaps a freshly baked muffin thrown in on the side. And we now have an official The Pickle Guys business flier hanging on our fridge. Looking it over we saw announced, in bold type, that the store is under the Rabbinical Supervision of Rabbi Shmuel Fishelis and now Jon is perhaps contemplating a career change. Because if one result of rabbinical school is the responsibility of overseeing pickle production, how great would that be?

The Return of Many Things...

I've been a monstrously infrequent blog writer as of late.

I’ve been sidetracked – by my move to New York, the start of a new job and, most recently, a week-long visit from Becca, all the way from Virginia. I’ve also been sidetracked (to a larger extent than I think even I knew) by my odorless state - that unassuming and constant olfactory nothingness has weighed on my mind. I've kept my love of food throughout my recovery, but have been obviously distracted in my pursuit of the culinary, so easy to shy away from without the full physical ability to taste. I've also realized that a result of stressful transitions in my life (going to college, moving to New York) is a temporarily odd reconfiguration of my appetite. My first week at Brown, for example, I had a strange and all-consuming affinity for white rice and mustard. (Weird, I know.) My first week here in the city consisted of plain burnt toast. And stress coupled with lack of smell has definitely caused me to shy away from the culinary (writing and eating) without even fully realizing it.

Luckily those days are over.

Scents have been constantly, noticeably creeping back into my olfactory consciousness. (Last night while concocting one of my favorite quinoa salads I could hardly concentrate on a story my roommate was telling; I was too enveloped in the smell of cilantro to listen, so strong and pungent to me that I could barely believe it has been almost a year since I last experienced its cool aroma.) (In fact even as I sit here now, at the computer in the tepid 90 degree summer smog of my third-floor apartment, I smell cilantro. Just thinking about last night’s smell-return brings the scent vividly back to my nose.) These vividly regained scents have rejuvenated my love of and involvement in culinary.

A month or so ago, also, I spent an intense week grappling with the direction I want to go professionally. Culinary or writing? I was offered a position as a server at Thomas Keller’s Per Se after spending an evening observing the kitchen and dining room. I can’t write much about that experience (confidentiality agreements…alas), but the temptation of spending my time in a kitchen of such jaw-dropping culinary genius and a restaurant of such beautifully choreographed eating was extremely hard to pass by. I could have, obviously, learned a lot about food there. Just in that one night I learned a great deal. But as I watched Chef Benno at work, graceful and precise, awash with the delicate color of dishes plated so artistically in front of me, I realized that as a permanent fixture at Per Se I would feel a constant sense of loss. It is an all-consuming, intense environment and I would be continually aware of the unattainable. I could see the food, but I could not wholly understand it. Not now, anyway. Instead of carting around a thick cloud of ‘what could be’ I decided to take a step back and move in a different professional direction. One involving writing, of course. More specifically - in the realm of magazine publication. For now.

And what I've found since is that the decision not to follow the official culinary route seems to have given me some kind of mental permission to enjoy food all over again. A rejuvenated sense of culinary enthusiasm. I guess it makes sense, but it has certainly surprised me. And came in perfect timing for Becca’s week-long visit. Becca shares my passion for food in a way no one else I know does and her visit was an intense, beautiful eating-fest. One that my stomach and I are still recovering from.

Before I had even decided to move here, Becca and I had already concocted a gutsy list of things and places we would eat together in the city. (We also have an ongoing list of over 100 different kinds of muffins we will create for our future joint muffin shop. Peppermint muffin? Lemon champagne? Brioche muffin with a foie gras mousse center? The mystifying golden vodka muffin? This preemptive New York eating list is not that strange in the history of our culinary tabulations.)

We did a pretty good job of hitting up the big names on our list – way too well to fully write up for one already prolific post. Just thinking of all the eating to mention is giving me a food-coma relapse. There was an evening exploring soup-dumplings in Chinatown, pizza at Otto and wine in Bryant Park, tapas (and a table next to David Lieberman) at Tia Pol, thai food, peanut butter cookies and coffee dates, biscotti and monkey cake at Amy’s Bread. We even ran into Rachael Ray and Thomas Keller at the Bouchon Bakery in Columbus Circle. The crowning moment, on which a post is soon to come, was lunch at Le Bernardin.

And on one morning while we sat at my kitchen table watching the Today Show (delightfully free of work til 2) I asked, “So what shall we do today?”

Becca looked at me, eyebrows askance.

“What I mean to say,” I quickly reworded, “is what do you want to eat today?”

She smiled and nodded emphatically: “Cupcakes.” 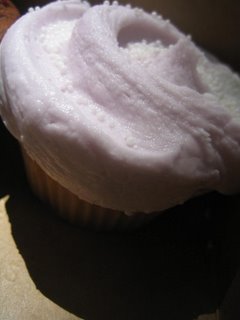 We operate on the same page.

After a morning of poking around the west village and participating in the (continuing) trend of averting my eyes as my bank account rapidly depletes itself ( thoughI did, on a side note, have to buy Bill Buford’s new book, Heat, about his experience in Mario Batali’s Babbo kitchen and beyond – I am seeing him talk this week; there was no choice…) we made our way to The Magnolia Bakery. Cupcakes from there have been first on our to-do list for quite some time. Perhaps that’s because of a certain TV show – but perhaps because, really, what can be happier than a fluffy, sprinkled little tower of cake? 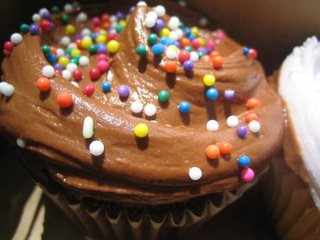 We brought them to Washington Square Park and ate as we watched as a phalanx of tiny dogs chased each other around their owners’ legs in the nearby dog park. The vanilla cupcake was soft and simultaneously dry. But combined with the thick creaminess of the light-purple butter frosting it was textural heaven. The chocolate one was too moist for me – too liquid in its overwhelming chocolaty-ness. Strange, I know. Perhaps it was a result of the stifling heat wave that has been surrounding us, melting everything in its path. But Becca didn’t have the same problem with the chocolate, so who knows. In conclusion, cupcakes are a relaxing way to spend an afternoon. They certainly made the traipse to my office, soon after, much more bearable.

This week-long festival of eating with Becca was a fitting way to celebrate my partial return to smell and the full revival of culinary-love. The words mmmmm and delicious were probably the most commonly used between the two of us. Well, perhaps a garbled oh-my-god-I’m-so-full and the mumbled I-think-I’m-in-a-food-coma could also be thrown in the mix. It was also the first time I ate while seriously attempting to use all my senses but smell, in an intellectual manner and far away from sadness or loss. It was a week reinforcing the fact that Becca is a wonderful partner in taste and friendship alike. And a week that has provided fodder for a good deal of blog writing. 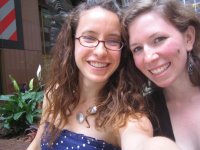