When Ben threw the bulbous lump of white duck fat into the sauté pan there was a pop, a sizzle, and a burst of orange flame.

He stood back for a moment and watched, a little smile playing on his lips.

“BEN!” bellowed his girlfriend from across the room, an audible note of panic. “It’s on fire!”

She stood next to me in the center of the kitchen and we stared at the flaming pan. I never knew rendering duck fat could be so thrilling. 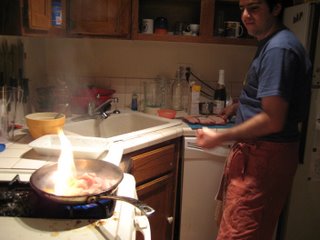 “I don’t feel comfortable with this,” she said.

Ben’s orange apron was tied akimbo around his waste; flour dusted his navy blue T-shirt. “Ok, ok,” he said, “I’ll turn it down.” With a crank of the knob the flame soon disappeared, and we were left only with a melting puddle of duck fat – the crisp left-over brown bits (“duck cracklin’s!” he exclaimed) floated in the bronze-tinted liquid.

We were in the middle of an afternoon of cooking. An afternoon that extended into an evening—what felt like the shortest seven hours I’ve ever spent in a kitchen—and resulted in one of the most exciting, interesting dinner parties in which I’ve taken part.

I have been running around like crazy in the past few months—a heady combination of work and play—and a day in the kitchen was just what I needed.

(Thank you, on a side note, to those who emailed to see if I have been OK. I’ve been a negligent blogger, but things have finally calmed down—grad school application finished!—and I’ll now have more time for my own writing. Already I am sitting on a backlog of cooking experiences to relate… improvised chocolate cake, a dinner party centered around Hungarian paprika, a return to baking my ‘famous’ apple pie.)

But I digress. Flaming duck fat was just a moment in this cooking extravaganza embarked upon with my friend Ben, as we did a run-through of a menu we have been talking about for a long time. We are in the process of planning a small “restaurant” gig—dinner for 10 or 15 people sometime in the near future, with a minimal charge and a deluge of seasonal small plates at Ben’s apartment in Brooklyn.

Ben is an extremely talented, self-taught chef who sidelines as a writer and teacher, and is known for his intricate, creative cooking. At many a Sunday evening dinner get-together I have seen jaws drop in awe as his creations are deposited on the kitchen table in the bright, cozy apartment he shares with his girlfriend.

For our current project Ben is Chef. I don’t have a whole lot of insight to bring to his already wonderful savory creations—unless, that is, you count a very dedicated hand at chopping shallots or cucumbers, slicing kumquats or squeezing the juice out of blood oranges. Which is why I am Pastry Chef. Especially without a full sense of smell (necessary in the constant tasting and experimentation of a savory chef) the science and calculation of baking is where I excel. The loss of my sense of smell (which I have written extensively about) has given me a new sense of the oven—one that relies on measurement, texture, and the visual rather than scent and the intricacies of taste. And, if I do say so myself, I bake beautifully. 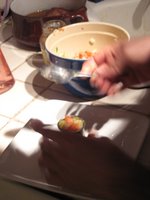 A dusky, cold evening last weekend Ben and I brought our menu into existence for a few friends, charged only with a promise to give constructive criticism. 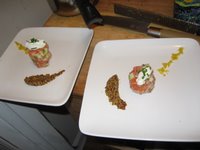 Dinner began with a tartar: stacks of vibrant pink salmon, streaked with soft lines of white, was combined with the green crunch of apples, endive and cucumber. Topped with a cool drop of sour cream and a sprinkling of chives and surrounded with streaming lines of lemon zest and grainy mustard, it was combined by the diner’s fork. 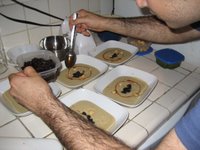 A bronzed cauliflower soup steamed and burbled on the stove before it was plated with a dollop of sweet and sour raisins, a stream of green fennel oil and toasted macadamia nuts. “Oh wow,” said my friend Adrienne as she ate, “this is damn good.”

Next was a saffron risotto – a burnt-orange hue, it was laced with cheese, butter, the nutty and surprising hint of soy milk. It was 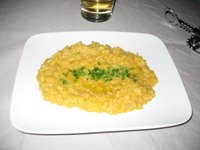 rich and soft, punctured with the green of cut chives, but “there is something off,” said Ben, forever the perfectionist. “It’s not incredibly interesting… Perhaps a combination of two risottos for the final,” he mused. “Blueberry risotto. Maybe mushroom.” 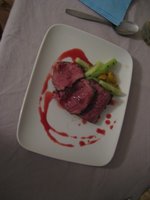 The duck breasts, which we had seared earlier in the evening and let sit in their (once flaming) rendered fat until just before service, were tender. We cut them into delicate, moist slices and served them next to a small salad of cucumber and candied kumquat, drizzled with a vibrant blood orange glaze. “Nothing makes a great duck like a few hours hanging out in its own fat,” said Ben.

It was a half hour later—after a few deep breathes of digestion and the requisite “I can’t believe tomorrow is Monday and I have to go back to work” speak—that the timer rang and I removed my finale from the oven.

Individual molten chocolate cakes, baked in small globular soufflé cups, were nestled on plates next to blue china spoons that held a rounded scoop of light brown ice cream. Salted Caramel Ice Cream: quite possibly the most delicious thing on the face of the earth with its cool, understated sweetness and a backhand tang of salt. Molly of Orangette first clued me into its existence, and with her recipe, my ice cream maker, and a sprinkling of fleur de sel on top, it complimented 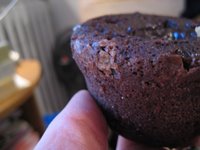 the cake perfectly. Salty to sweet; hot to cold. There was silence around the table as our spoons clinked in unison.

(The only picture I have was taken the next day, with one of the leftovers, as I was too distracted with the act of eating to use my camera at the time...)

I’m not sure exactly when Ben's and my “restaurant” will come to pass – recipes need tweaking, tables need renting, details need finessing (if anyone has any tips, ideas, or interest in joining us, please email me). The act of creation itself, however, has been an inspiring challenge. And, to echo Adrienne, “pretty damn delicious.”

The dinner party resulted in a late night and the streets were dark and empty as I walked from the subway to my apartment, a scarf wrapped around my face and the a bite of wind hinting that this late winter freeze may indeed arrive. I felt full and tired, yet buoyed up with the knowledge that I can still cook. The kitchen still beckons. There are happy culinary projects looming.

I was sleepy the next day when, perched at my desk, I tried to make sense of the words winking at me from my computer. It was not long, however, before the Tupperware container holding a small left-over cake popped right out of my bag (10am is prime dessert time, I say). Combined with a very large coffee, I've discovered, individual molten chocolate cakes can make the trying times of an office on a Monday morning shockingly pleasant.
Posted by Molly at 4:32 PM 1 comment: