Early on Monday Matt and I drove through the empty streets of Cambridge and then the highway crowded with commuters, our road bikes bouncing on the rack strapped to the back of our car. We drove an hour south in the glossy morning light to Plymouth, Massachusetts—home of the Mayflower (II) and the town’s namesake rock, a smooth little stone housed under a portico on the water. The tourists were just beginning to hit the streets when we arrived, but we weren’t in town long. We were there to bike.

We began our cycling route from the parking lot of a supermarket. The sun was already thick in the sky when we entered the Myles Standish State Forest, where we spent hours riding: Up and down, up and down. Hill after rolling hill, small pavement bumps that passed like hiccups, but ones that made my legs burn. It was close to 90 degrees and I could soon feel the salt on my skin, layered like a mask.

On our ride we passed through miles of forests and fields. Zipping along, I could smell stagnant ponds covered in algae, pine trees, the fresh turned earth. I caught whiffs of car exhaust and concrete. The hesitant green of plant, or maybe flower. Fried dough in town, and briny ocean water to its side. Human sweat. Gatorade. Always: The soft sweet of summer air.

Matt and I have been bicycling a lot since he returned from Afghanistan. A long-time runner, I love the challenge of a new sport. I love its speed. I love how hungry I am when we’re done.

On Monday evening we returned home from Plymouth sweaty and starving. I was surprised when Matt, who loves to eat but has never been one for the stove, offered to cook. He grilled bratwurst, heated a pan of sauerkraut and steamed bright green broccoli florets, which he served with Parmesan cheese and lemon juice. We ate the sausage with mustard, and sourdough rolls warm from the oven. There were a few cold, cold beers. I can get used to this, I thought.
Posted by Molly at 9:45 AM 3 comments:

I spent last weekend with my family on a lake in rural Pennsylvania. We stayed in the same cottage where my mother and my aunt spent the summers of their childhoods. It smells now as it did then: Of varnish, sunscreen and musty beach towels faded from the sun. It echoes with the sound of crickets at night. We attended a pig roast and drank red wine while sitting on the dock. Canoeing around the murky waters, we didn't put on sunscreen until a bit too late in the day. On Sunday night, we lit sparklers and read the Declaration of Independence out loud. I made a peach-blackberry crisp. It came out of the oven bronzed and crunchy with tiny shards of pecans. We ate it with vanilla ice cream. 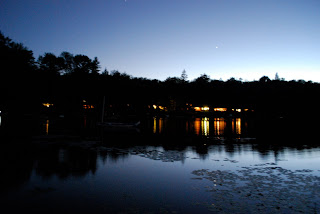 Preheat oven to 375 degrees Fahrenheit. In a mixing bowl, toss together the fruit, sugar and flour. Add zest and amaretto. Mix. Transfer to a large ovenproof dish. Cover with crisp topping. Pressing down lightly, leave no fruit exposed. Place on aluminum foil or a baking dish to catch bubbling juices. Bake 50 - 60 minutes, turning after a half hour for even bronzing. Serve warm, with ice cream.

Stir together flour, sugars, salt, cinnamon and pecans in a large bowl. Work the butter into the flour mixture with tips of fingers, or an electric mixer, until crumbly in texture. Can be made ahead, or frozen.
Posted by Molly at 8:57 AM 4 comments: