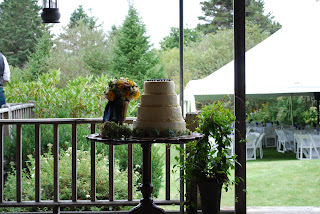 Ashley and Colin were married last Saturday. The ceremony took place next to the ocean up in Maine. I stood near the lighthouse with the other bridesmaids in a line of deep blue fabric around noon. I watched Colin, who wore a kilt and a yellow rose on his chest, as Ashley walked down the aisle in her gown. I wasn’t sure if I was shivering from the cold or from the intensity of his smile or, later, from the radiance of her tears. Their happiness was contagious.

And I made their wedding cake.

Ashley and Colin asked me to make their cake a little over a year ago, during the cocktail hour of another wedding, which I wrote about here. I immediately said yes. I had had a drink or two and it sounded like a great idea. I’ve worked in bakeries before. I love to feed people. How hard could it be?

The anxiety set in around April of this year, however, and it didn’t let up until last Saturday around 3 p.m., when those two sliced into the bottom tier and fed each other buttercream bites with their fingers.

I learned a lot.

Baking a wedding cake is all about the planning. It requires a lot of ingredients and a lot of equipment. It requires time. More time than I gave myself, really. I left the residency in Woodstock and arrived at my mother’s house in Boston on Wednesday evening. I made a few batches of frosting and went to bed. I began to bake on Thursday morning. It was an intense day: one that began around in the still-dark 6 a.m. and didn’t end until a bleary 11 at night. I got through the final stretch with the help of my mother, who fed me wine and ice cream upon returning home from work.

Early on Friday morning I drove up to Maine with the four frosted tiers, which I had carefully placed into plastic boxes and balanced snugly on the backseat. Around 1 p.m. I arrived at the inn where the reception would be held the following day. I brought the cakes into the professional kitchen so that I could stack them into something resembling a wedding cake. This task required wooden dowels, which I had never used before, and a lot of faith. Before I began I stood motionless for a few minutes, staring at the individual tiers. They were big, hefty cakes measuring at 8, 10, 12 and 14 inches, respectively. I held a pair of wire cutters in one hand and the dowels in the other and I thought: this will never work. The dowels seemed so thin and the cake, so heavy. But finally the teenage prep cook who was working on the mise en place for dinner service behind me leaned over and whispered: “Just do it.”

I measured, cut and then stuck the dowels into the cake. I delicately placed the tiers on top, one after another. And it didn't collapsed. It didn't sink into a sticky cloud of crumbs. The cake held just fine. It turns out wooden dowels really do work.

And on Saturday afternoon the 125 guests devoured it all. It was an almond cake, filled with alternating layers of lemon curd and blueberry jam and frosted with a swiss buttercream. I will say: it was delicious. 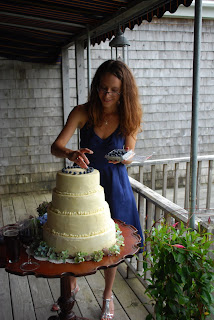 This wedding cake required patience. It required 10 pounds of almond paste, 10 pounds of sugar, upwards of 60 sticks of butter and 100 eggs. It required 40 lemons, four cake pans and a whole mess of cardboard rounds and wooden dowels. But when I finished and saw it perched on a table and surrounded by pale blue hydrangeas, it looked like a wedding cake. A real wedding cake. True, it looked like a wedding cake made by a bridesmaid and not a professional baker, but I’ve never been so happy to watch a lawn full of people eat dessert. I’ve never been so happy to see two people in love shoving hunks of frosting into each others' mouths.

I am listing only the base recipe of each component to the cake below, which is enough to make one 10” cake. I am happy to expand if there's interest. For Ashley and Colin's I did a lot of guesswork, which I’m pretty sure wasn’t always the most time efficient. But, hey, it worked. 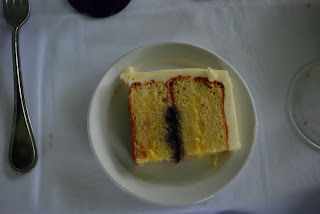 Recipe can be found here.

For a 10” cake, you need to use this recipe twice in order to make the four layers. Bake two cakes and them let them cool according to the recipe’s instructions. [I didn’t use any extra equipment in order to help this size cake come out smooth and even, and I had no problems. Only for the 14” cake did I use a baking core.] 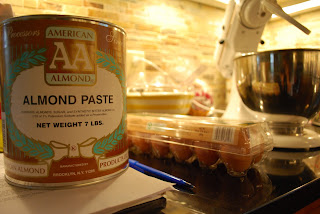 When the cakes are cool, slice each in half using a long serrated knife so that you effectively now have four. This can be tough, so work slowly and at eye level, making sure to keep the knife even.
Then, dab the top of each layer fully with moistening syrup [recipe below] using a pastry brush. Use enough so that it soaks into the top, but doesn’t saturate it. I used perhaps 2 cups of the syrup for the entire 4-tier cake.

Now this is key. I’m pretty sure this moistening syrup, which is just simple syrup with some lemon juice, kept the cake at a perfect just-baked level of moist crumbiness. It worked so well that multiple gray-haired men came up to me after the reception to say they have never had such delicious wedding cake in all their life.

Bring water and sugar to a simmer in a medium saucepan. Stir until sugar is dissolved, and take off heat. Let cool to room temperature. Add lemon juice. I used around ¼ cup for this amount. 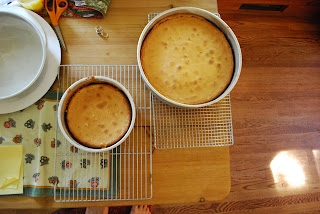 While the cake is baking and moistening syrup cooling, make the frosting. [Or, like me, you can make this ahead of time.]

You can find this recipe here.

For one 10” cake I doubled the medium size recipe that this blog author used, and had a bit leftover. I guess I like frosting. This can be kept in Tupperware in the fridge overnight. Make sure to take it out and let it return to room temperature before you use it. It needs to be whipped again in a standing mixer. Don’t be alarmed if it immediately looks curdled. That happened to me a number of times and I found myself constantly on the verge of a panic attack. Just let it keep whipping. All will be OK. I promise. 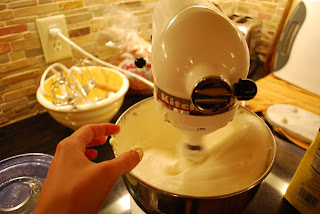 And then you can begin to stack the cake layers.

First, I generally take some frosting and put it in a ziplock bag. I then cut a tiny piece off the end of one corner and use it as a makeshift pastry bag. I pipe a line of frosting around the edge of each cake layer before I put on the filling. This helps to keep the curd and the jam from oozing out, so it won’t discolor the frosting later.

Bring about an inch of water to a simmer in a medium saucepan. In a medium size metal bowl, combine egg yolks and sugar and whisk until smooth, about a minute. Measure the citrus juice you’ve squeezed. It should come to about a third of a cup. If there’s less, add water. Add the juice and the zest to the egg mixture. When water in the pan is at a simmer, reduce heat to low and place the metal bowl on top of the saucepan. It shouldn’t touch the water. Whisk constantly until thickened, light yellow and coats the back of a wooden spoon. This takes anywhere between 7 and 12 minutes, in my experience. Remove from heat and stir in the butter immediately, one piece at a time, allowing each addition to melt. Keep stored in a clean container, with plastic wrap touching the curd on top, so as to prevent a crust.

I meant to make this from scratch, but time got away from me. My recommendation in this scenario: Buy it at the grocery store. I used Bon Maman. 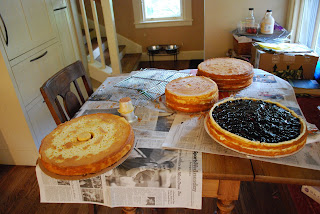 And next: begin frosting.

I frost the cake in two steps. First, I do a quick all-round layer, often called the “crumb coat.” I do the sides first, and then the top. I use a knife to spread, or an offset spatula. I get the cake completely covered in this round. If there any dips or dives in the cake, I put a bit more frosting there to even it out. Then I put it in the fridge for a few hours. The second frosting is more important. The second layer comes when the first is already hard, and you don’t have to worry about the crumbs desecrating the pristine white of the buttercream. So for the second layer, again, I do the sides first and then the top. I often dip the knife or spatula I am using to frost into a cup of warm water to help smooth things over. It just takes patience. 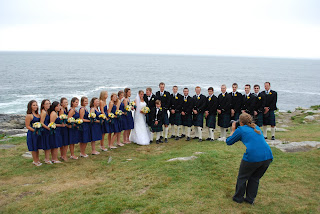