On December evenings when I was a girl, my father and I would drive around town looking for the best (read: most garish) Christmas decorations. The more light, the more color, the more porches and lawns laden with statues and scenes and rotating Santa dolls the better. I grew up in suburbia, so these holiday tours involved a minivan on inky black roads, long stretches between fields and farms and gated neighborhoods. I remember the smell of those evenings. Of winter. Of cold—that deep dark blue scent that mixes so well with car exhaust and pine.

Technically, I’m Jewish. My father grew up in an actively Jewish household. But my Protestant mother converted to get married and brought with her a slew of Christmas traditions from her Danish past. The holiday was a hot button issue in our house. We celebrated when I was very small. But then when I began attending Hebrew school, we stopped. No more tree. No more Santa. Instead we went skiing in Maine. I missed it. My father knew.

We called our favorite house on this Christmas light tour the “Blue House”—because, well, it was blue. Not the house itself, which was the usual New England-style cloudy white. But the lights draped upon it were all blue. Neon blue. They covered the house—the roof, the windows, the door, and even the yard, coating every inch of every tree, snaking lines of light out into the sky like a spider web. I could stare at those lights for hours. We had entered magical world where gravity didn’t exist.

I wanted to do the same to our house. My father said no.

I hadn’t thought about the Blue House for a while. But then on a Saturday evening a couple weeks ago, I climbed onto a trolley parked at the Somerville City Hall. I was there with a friend and—bundled in down and wool, breathing misty clouds against the frosted windows—we were there for a Christmas light tour of our own.

The Illuminations Tour is a yearly tradition, a one-night-only option, a guided trolley ride among some of the more enthusiastically decorated homes in town. Our trolley was filled with tipsy hipsters. By the time the tour began it had been dark for hours, but was actually only 9:15. Laughter fairly exploded from the rows behind us. My friend and I weren’t tipsy, but we were verging on hipster, both sporting thick-rimmed glasses and skinny jeans. We had brought a bar of chocolate—dark chocolate with sea salt—and shared it square by square as the trolley rumbled up and down the streets, past the porches overflowing with glowing blow up dolls: the nutcrackers, the snowmen, the ghoulish-looking Santa Clauses. Plaster reindeers hung from roofs, ablaze with glitter and neon.

When the tour ended, the trolley dropped us back off where we began. We clomped back out onto the ice-studded streets. We stopped to drink some hot cider, standing in the corner of a bar filled with people wearing red and green and the occasional Santa hat. We decided to again seek out the street that had some of the best-lit houses from the tour. This time, on foot. We could take pictures.

It was close to 11pm by the time we arrived and only one house was still lit. All the others were dark. The street was empty and quiet. We walked side by side down the center of the road, each footstep an echo. The air had grown cold, and, jamming a wool hat over my hair, I breathed in that familiar scent of winter.

When we reached that final house, we paused in front. It was a fantastic house, plastered with colored lights and redolent in blowup dolls. A particularly friendly-looking plastic snowman was fastened to the roof; he smiled down on the street.

Then I heard a door slam. A click. A switch. And suddenly the lights shut off. All of them. We stood in the middle of that now inky black road and watched as the snowman began to deflate. He lost his air rapidly—surprisingly so. We watched as he began to bow, leaning slowly over himself. He made an elegant fall to the ground.

I woke up the next morning and decided to bake cookies. 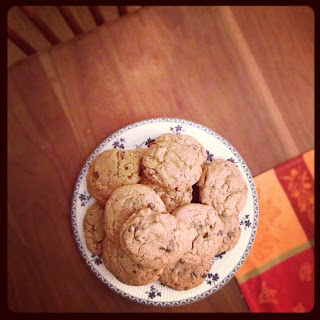 These cookies have been written about all over the place. But, dudes, they’re great. The whole-wheat flour doesn’t make them heavy (or healthy, I promise), but instead lends a nutty, earthy flavor that complements the richness of the butter and bittersweet chocolate. This dough can go straight from the bowl to the oven, but I know folks who recommend chilling the dough first, sometimes already portioned out on the baking sheet and then wrapped in plastic. (This chilly pause will make your cookies a bit more plump and, depending on how long you leave them in the fridge, a bit more flavorful). My friend Jess tops them with some sea salt flakes. I made this batch plain.

Preheat oven to 350 degrees Fahrenheit (with racks positioned in the upper and lower thirds of the oven). Butter two baking sheets (or line them with parchment).

Whisk together the dry ingredients (flour, baking powder, baking soda, and salt) in a medium sized bowl and set aside.

Put the butter and sugars in the bowl of a stand mixer fitted with the paddle attachment. On low speed, mix for about 2 minutes, until just blended. Add the eggs one at a time, beating well after each addition, scraping down the sides of the bowl as needed. Beat in the vanilla.

Add the flour mixture and mix on low speed until just incorporated. Scrape down the sides of the bowl. Add the chocolate and blend until evenly combined. (If there are still pockets of flour, use your fingers to massage the dough a bit. You don’t want to do any overbeating.)

Make mounds of dough about 3 tablespoons in size. Place them onto baking sheets, about three inches apart, or about 8 cookies per sheet (they will spread as they bake). Bake for 15 – 20 minutes, making sure to rotate the sheets halfway through. Transfer the cookies to a rack to cool. Repeat until all the dough is used.
Posted by Molly at 1:02 PM 12 comments: