Four years ago yesterday I smashed the windshield of an oncoming car with the back of my skull. I broke my pelvis, tore the tendons and ligaments in my left knee, and lost my sense of smell. I don’t remember much about the following weeks. Or months, really. I went from working in the kitchen of a restaurant, on the eve of beginning culinary school, to recovering on a bed in my mother’s living room, enveloped by a haze of pain killers and depression.

This year, yesterday, I baked a cake. It was a simple butter cake. I used brown sugar and eggs, cinnamon and baking soda and flour. I poured it in a pan and I nestled a few neat rows of deep purple plums, cut in half, on top. I popped it in the oven, and when it came out into the kitchen a half hour later the whole room smelled sweet and warm, like fruit and caramel and autumn. A deep purple, nutty brown autumn.

I’ve been thinking a lot lately about how lucky I am. I lost my sense of smell in a car accident four years ago. With it vanished my ability to taste and my plans to be a chef. But since then, it has slowly returned. It has returned in a curious and fantastic manner, one that ignites wonder almost every day. In fact now, after all these years of thinking and stressing and working on it, I think I can smell better than I ever did before.

I’m lucky because I experienced a traumatic accident, terrified my family and could have died. I could have lost so much more. But I didn’t. I’m here. I’m writing a book about smell and all that it means. The experience, in fact, has given me more than it ever took away. If I lost anything, it was the sense of immortality that at age 22 I really felt was mine. I lost some naivety, and the tendency to ignore the small things in life.

I baked that plum cake in the kitchen of a large, wood-planked house in Woodstock, New York. I’m here for the month of September, quietly tucked away in a small studio to write. There are nine others on the property —writers, painters and composers—all doing the same as part of a residency program up in the hills. It’s so quiet at night I can hear the crickets. I can hear water trickling from down the road. It gets so dark that the moon illuminates the trees, shimmering through the leaves like diamonds, and it’s not hard to imagine all sorts of ghosts waiting just behind the creek.
Posted by Molly at 7:02 PM 6 comments:

I’ve been waking up early since I returned from France. Very early. Like, pre-dawn early. I’m not entirely sure why. At first it was because of jet lag. More recently it’s probably because of too much work. Too much of that now-familiar anxiety, born of book writing and boys at war, which curls up from my toes and shoots through my spine.

In these very early mornings I enjoy watching the sun rise. There is a pear tree that grows in the yard behind my apartment building. It looks nice in the dim morning light, thick with green fruit and leaves. I’m watching it right now, in fact. It’s not morning, but that doesn’t matter. It’s raining like crazy, blustery and dark as thunder claps above my head. The pear tree looks like it's dancing in the wind: something fast and jaunty, like the four-step I learned in Louisiana this spring.

Also in the very early morning I like to bake. This morning, for example, I made zucchini bread. I used my stepmother’s recipe, which is a favorite of Matt’s. I baked a loaf and let it cool. I wrapped it up tightly and put it in a box. This afternoon I brought it to the post office. I’m not sure how well zucchini bread travels, but we’ll see. Next stop for that plump little guy: Afghanistan.

Last week I made cantuccini, a simple biscotti-like cookie, almond-studded and bronze. The recipe came from Julia Child’s Baking with Julia, which now seems fitting with all the press swirling about a certain film. They are wonderful in the very early morning, especially when dunked in a mug of coffee. 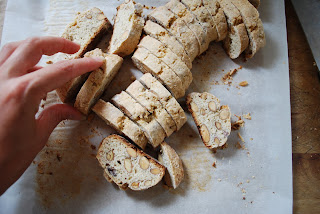 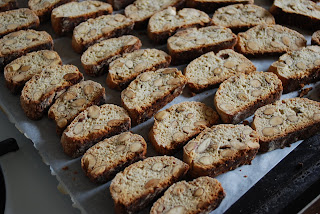 Cantuccini
Adapted from Baking with Julia

Preheat the oven to 350 degrees F.

Combine all the dry ingredients together in a bowl. Stir. Add almonds and mix well.

In another bowl, whisk together the eggs and vanilla extract.

Divide in half and shape it into two 12-inch logs. Transfer the logs to a baking sheet lined with parchment.

Bake for 30 minutes. The logs will rise a bit, turning lightly brown on the bottom.

Transfer to a wire rack and let cool completely.

Once cool, cut the logs into quarter-inch slices. Lay the slices, cut side down, on a baking sheet lined with parchment.

Bake for an additional 10 or 15 minutes, or until the cantuccini are bronzed but not too dark. Let cool completely and enjoy! 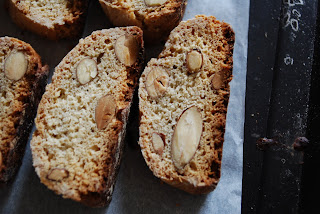