The tree outside my apartment’s kitchen window is finally beginning to change color. There are streaks of yellow and a hint of red peaking through the stubborn summer green.

I noticed this yesterday morning when my computer screen became blurry with frustration and I decided to bake cookies instead. I put my Kitchenaid mixer on the windowsill and was surprised by the sudden color outside and surprised, again, by the sweet and salty smell of butter as it churned.

The night before a cold rain had pattered on my umbrella and my friend Ben made a meal of homemade pasta fragrant with cardamom and tossed with a handful of sautéed mushrooms, which tasted like October.

I suppose I knew that summer had ended. But it wasn’t until later yesterday afternoon, when I walked through the Grand Army Plaza farmers market on my way to Prospect Park and saw the piles of pumpkins and crates of knobby gourds spilling out of the stalls, that I realized that it is indeed autumn. All I wanted was apple pie.

So this afternoon I was sitting at my desk, which is covered in mounds of papers and books and rambling lists of things that I need to do, and felt overwhelmed with things to write and articles to read and interviews to schedule. So I decided to go to the grocery store. And then I decided to cook. I’m a procrastinator. What.

I didn’t make an apple pie. But it was something warm and burnished and felt like fall: vegetable and barley soup topped with a soft-poached egg.

Now, go back to work Molly. 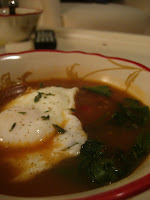 -Cook onion and garlic with a half teaspoon of salt in oil in a saucepan over medium heat. Stir every so often until pale golden, 10 minutes.

-Stir in tomatoes with their juice, stock, barley, and a half teaspoon of salt and pepper each. Simmer, covered, for 15 to 20 minutes.

-Meanwhile, bring a saucepan of water to simmer with a tablespoon of vinegar.

-Break one egg at a time into separate cups, and then slide into the water, one at a time. Poach until whites are firm, 2 - 3 minutes. Transfer to paper towel, and then serve on soup.
Posted by Molly at 8:21 PM 2 comments: