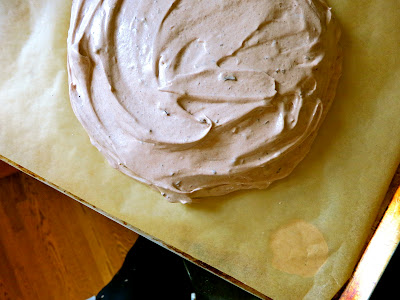 Since I last wrote (really wrote) (uh, last year!), a lot has happened. There was Thanksgiving, then Hanukkah, and then Christmas. I brined a turkey. I ate latkas. I braised veal.  I whipped some cream to top a cloud-like pavlova that I haven’t stopped thinking about since.

It was cold, and then it was warm, and then it was cold again. There was New Years: I made gnocchi with browned butter and sage, and devoured salad with sautéed dates among good friends. I bought new (big) eyeglasses and, as a result, find myself looking at a stranger in the mirror.

My essay in O the Oprah Magazine was published (check it out!). I spoke with Christopher Kimball on America’s Test Kitchen Radio (podcasts are on iTunes!). I realized that the book I’m editing for that same company has a rapidly approaching deadline. (BTW, it’s a great book, a cookbook, on shelves this fall. I’ll tell you all about it soon.) But despite this impending due date, I first sought out and then accepted even more freelance deadlines, which I continue to struggle to meet (oy!).

A month or so ago, I came down with shingles. Yes. Shingles. Let me tell you, this is not an illness I recommend. But being sick did give me the excuse to watch 6 episodes of Downton Abbey in one go. Just as soon as I began to feel better, however, I caught a winter cold. A bad cold. One that fogged my head, stopped me up, reminded me yet again what it is like not to be able to smell. It seemed impossible that my immune system could be as nonchalant as to let anything else attack my body. But then this week I had the flu. The flu! It was only a 24-hour bug. But right now? I feel drained.

So. I’m here. And I’m going to try and stay here. I can’t make any promises. But I miss words. I miss my words. I miss that magic of sitting down and letting them come, of arranging them and rearranging them, of coaxing them to become what I want.

This fall, the Culinary Guild of New England read my book in their book club, and I had the honor of attending the meeting. This particular gathering was the best of its kind: A dessert potluck. And while everything I ate there was well done, there was one dish that stuck with me. A chocolate pavolva. It was crisp yet pillowy, the sweet countered by a cloud of unsweetened whipped cream and a mound of fresh raspberries piled on top. I asked for the recipe, and was pointed to Nigella Lawson.

I thought about this pavolva for a good three months before I attempted to make my own. I mean, meringue can be finicky, and raspberries aren’t really in season. But then I did, on Christmas Day. And it was good. 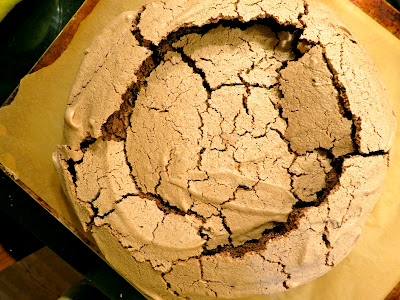 Meringue can be intimidating, I know. The key is to make sure that you whip the egg whites to the desired consistency (stiff and shiny). The sugar, which you add slowly to the mix after the egg whites are satiny and smooth, delays and then stabilizes the egg foam, helping the meringue hold its shape as it bakes. The addition of balsamic vinegar (an acid) helps the egg proteins to thicken at a lower temperature, with a more tender result.
It’s important to cook the meringue slowly. After it bakes at 300 degrees for a bit over an hour, don’t remove the meringue from the oven. Instead, turn down the heat, crack the door a smidge, and let it sit until completely cool. This slow, gentle cooking helps the meringue to remain pillowy and intact. (But don’t worry if it falls in the center after baking. Mine did. The beauty of this dessert is that 1. you invert the meringue so that the smooth bottom becomes the top and 2. the whipped cream hides all imperfections anyway.)
If you don’t have access to superfine sugar (I didn’t) it’s easy to make: Just whirl regular granulated sugar in the food processor for a bit.

Preheat the oven to 350 degrees Fahrenheit. Line a baking sheet with parchment paper.

Nigella suggests outlining the shape of your 9-inch cake tin on the parchment paper in pencil, and then flipping over the paper so that when you place the raw meringue on the sheet, it won’t touch the pencil. She’s a smart lady.

Beat the egg whites in your standing mixer until soft peaks begin to form. Then, begin adding the sugar in a slow stream, beating the eggs until they are stiff and shiny.

Now add the cocoa, vinegar, and chopped chocolate to the egg whites. Mix gently, but thoroughly, with a rubber spatula.

To bake the meringue: dab a bit of meringue on the underside the parchment paper on the baking sheet to secure it in place. Then, pile the meringue batter within the outlined 9-inch circle in the center of the parchment. Use your spatula to smooth and round.

As soon as you place the meringue in the oven, turn the heat down to 300 degrees. Cook for 1 to 1 ¼ hours. The meringue is finished when it looks crisp and dry on top, but is still “squidgy,” says Nigella, when you prod it with your fingers.

Don’t remove the meringue from the oven. Instead, turn off the heat, and open the door a tiny bit. Let cool completely, at least an hour or two. (The woman who made this pavlova at the book club I attended said that she left it in the oven overnight. Just, FYI.) When ready to serve, invert the baked meringue onto a large plate and peel off the parchment.

Now, beat the cream in your standing mixer gently until it is thick and cloud-like but still soft. Pile it on top of the meringue. Scatter the raspberries on top. And then grate the remaining 1-ounce chocolate (a vegetable peeler works well, too) on top of the raspberries. Done! 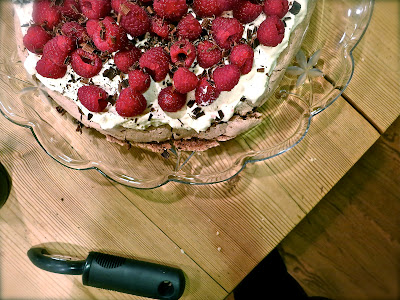