Scent of the City

I'm very happy to announce that I have a piece in the City Section of today's New York Times. It's about smell and it's about the city. But mainly it's about the life that each one gave to the other--and to me--as I recovered from the effects of the car accident in 2006.
Posted by Molly at 10:59 AM 12 comments:

I took an elevator to the 40th floor of a building in lower Manhattan on Tuesday evening of this week. When I stepped into the lobby, I saw small groups of people chatting and filling out nametags. I saw them sniffing at little brown vials of scent and recording their perception online. This is my kind of event, I thought with a smile.

I found a seat in an adjoining, window-lined room that soon filled to capacity. I was there for a lecture—A Rose by Any Other Name: the Science of Smell—hosted by the New York Academy of Sciences as part of their series “Science and the City.” For the next hour and a half I listened to Avery Gilbert, author of the recently published book What the Nose Knows, and Leslie Vosshall, head of Rockefeller University’s Laboratory of Neurogenetics and Behavior, speak about the sense of smell.

Though interesting and casual, sometimes even verging on goofy, there were no glaringly new insights for me. I already understand the basics of olfactory science and am familiar with the references to scent in pop culture. As you know, I have been consumed by smell for the last three years. But there were a few things that grabbed me.

A sense of humor, for one. There were images of Daredevil, the blind superhero with a highly tuned sense of smell, and Andy Warhol, who valued the memories attached to each of his colognes so much that he often retired them after only a few months. “… I realized I had to have a kind of smell museum so certain smells wouldn't get lost forever,” Warhol once said.

The theory of human pheromones was illustrated by a study done on strippers: tips earned from men while the pole dancers were ovulating were significantly higher than when they were not. Their tips fluctuated much more than the dancers on birth control, whose hormone levels were stable. It implies the power of our body’s chemicals, and the ability to perceive what we don't know is there.

In one moment, every member of the audience was asked to pinch his or her nose completely shut, place a jellybean on the tongue, and begin to chew. After a few seconds, everyone released their hand and exhaled. I watched as, one after another, the audience began to nod. Many smiled. While restricting the ability to smell, a jellybean is nothing but sweet and gritty. With an unclogged nose, however, flavor comes rocketing through. The sudden shot of vanilla, grape, or pineapple can be surprising.

At another point, Vosshall spoke about the different scent perceptions people have of simple, everyday items. It has to do with the olfactory receptors, which detect the odor molecules that arrive in all noses. Everyone has a different combination of receptors, she explained. Some of this difference is due to genetics, some due to wear and tear. It explains why some people love the scent of cilantro and others can’t stand it.

I remembered a professor I had in college, who taught child psychology early on Tuesdays and Thursdays. One morning during a lecture, she told my class that she loved the smell of skunk. “I would wear it as perfume if that wouldn’t be so socially unacceptable,” she said. I thought that was disgusting. I thought she was insane.

But now, over three years after I lost and regained my sense of smell, I too love the scent of skunk. To me, now, it’s sweet and nutty. It reminds me of baked goods.

“If you lose little bits,” Vosshall said on Tuesday, referring to the olfactory neurons, “things can get lost in translation.”
Posted by Molly at 10:36 AM 2 comments: 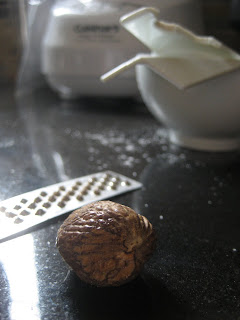 Nutmeg, paused in the midst of some hectic Thanksgiving kitchen work. More soon.
Posted by Molly at 9:00 AM No comments: