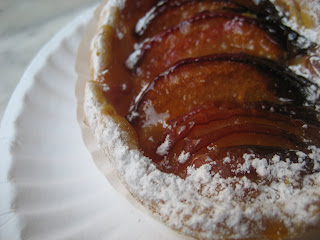 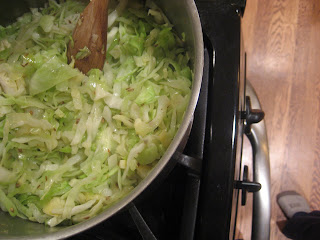 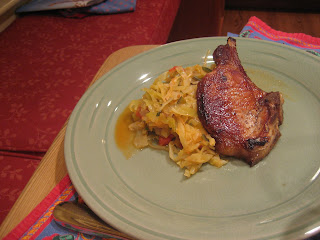 It is Sunday afternoon and I am sitting at my kitchen table. I’m drinking tea and eating one of the many apples I picked yesterday at an orchard in Harvard, Massachusetts. A big pot of chili is bubbling on the stove; cornbread spackled in sage just emerged from the oven.

I am unemployed and therefore my boxes of books and pots and pans are all stacked in the basement of my family’s home in Boston, where I am pausing while I figure out what comes next. I have time, which both scares and inspires me. I am writing a bit and cooking a lot.

Even within my few week without a job, however, I realized something: I like deadlines. I like the pressure and the excitement that comes with an endpoint. I like the concrete. And so I am making a schedule and my intentions known: I will write for this blog every week. I will post on or by Monday evening. And look, I’m already way ahead of schedule.

In other news, this is a watermelon grown in the garden where I used to live in Point Reyes, California. It perched on the seat of my car as I drove across the country. I ate it in Ann Arbor with Becca, late on a Sunday morning standing at her kitchen counter. It was small and sweet. I have never seen such large watermelon seeds. I left California early on a misty Monday morning. I left with a car full of books and clothes. A pumpkin, given to me by my landlord, perched on the front passenger seat. I left with both anxiety and excitement; I’m not quite sure what will come next.

I spent the next four days driving across the country alone. I passed through the Sierra Nevada mountains and Iowa’s rolling fields; I skirted the Great Salt Lake and Great Lakes. I didn’t find much good food, but plenty of scenery.

I arrived in Ann Arbor on Friday afternoon, bleary eyed and antsy. Becca, who I have known since our first week of college, met me after she finished work and we commenced what would be a restful weekend with a glass of wine.

Over the next couple of days we went on many walks – to the farmer’s market, along the river, to the bar. On Sunday, our morning stroll took us to a tea store in downtown Ann Arbor. There, the walls were stacked with rows of metal tins. Each held a different type of tea and their labels ranged from the familiar (Earl Grey) to foreign (Ayurveda Kapha).

The man behind the counter was passionate and verbose. He had a delightfully waxed mustache, a monocle dangling from a chain around his neck, and gave us an impromptu lesson on the spice and herb of all sorts of tea.

During the lecture, he held scoops of tea leaves beneath our noses. One at a time, Becca and I inhaled.

I was surprised by how much I could smell. Not only could I smell each tea held beneath my nose, I found that I could detect subtleties. I could pick out the rose in the Victorian Earl Grey. I could smell the orange in the Royal Grey. The peppermint tea nearly bowled me over. It was cold and deep. I couldn’t help but smile.

I remembered the first few months after the accident, in the fall of 2005, when I spent my time lying in bed at my mother’s house. I was recovering from a broken pelvis, open knee surgery, and the scull fracture that caused my loss of smell. Every morning my mom would bring me a mug of tea, sometimes laced with milk and sugar and sometimes just plain. She would ask me if I could tell what kind it was. I would inhale, willing myself to register something, anything. But there was nothing – just the wetness of the steam, the sharp heat of the mug. I could smell nothing; I could taste nothing. It may have well been hot water.

“Jasmine?” I would guess. “English Breakfast?”

But last week there was no question. I could smell the cardamom, the licorice and the lemon.

Towards the end of our lesson, Becca and I smelled a sweet variety of Rooibush tea. I inhaled over the scoop. The first whiff – burnt sugar, caramel – immediately conjured the hard black countertop at a tea shop in Providence where I used to go my freshman year of college. I went there all the time to read, to talk, and to drink Creme de la Earl Grey, a sweet brew that held blended blue flowers and a twist of cream. The similar scent in Ann Arbor sent me straight back – the uncomfortable stools, the constant cold draft sneaking through their large windows, the way going to college made me feel for the first time like I belonged.

Though I know much about the visceral memories that a single scent can conjure – I have them; I want them; I've read as much as I can get my hands on about them – they never cease to shock me with their suddenness and strength. And it made me think, standing there in that tea house last weekend, about how much I may have lost living for for those years without smell. Would I feel differently about those scent-less years if they had odor attached? Would my memories be stronger? Would they be different?

I was shaken from my reverie by the tea man, asking if I'd like to buy anything to take home with me. I thought about the Rooibush, and the way it hints at both caramel and my past. But then decided to go for a Chai instead. Might as well start fresh.
Posted by Molly at 3:18 PM 1 comment: