My grandfather Morris didn’t sleep at night. He would stay up until dawn, filling the dark with books and television. He was an artist as well as businessman, and would spend time painting in his studio—oil on canvas until his 80s, when arthritis overtook his fingers and he taught himself to make art on his computer. And towards the end of his life, when he was confined to a wheelchair, he would talk with Joel, a soft-spoken man from Peru who was hired to help.

I met Joel for the first time on Monday of this week, when he stood at the bima of an earth-colored synagogue to give a eulogy at my grandfather’s funeral. His English was hesitant; he had spoken only Spanish until he began these late-night talks with Morris.

There were a few things my grandfather had taught him during their hours together, he explained. First, Joel said with a laugh, he had learned to eat and appreciate smoked salmon during those nights with the 93-year-old man. He learned to watch baseball, especially the Yankees. He learned that his wife is boss of the home. He learned to say I love you.

There was smoked salmon at the gathering in my grandparent’s house after the funeral. I looked at it, sitting on a plastic platter next to the bagels on a table piled with food, but couldn’t remember my grandfather ever eating it. I can't remember much of what he ate at all; there are only a few things that stand out.

I remember the salt—he used a lot, on everything. I remember the gefilte fish—I was entranced by the gray blob his plate during childhood Passover Seders. My family always brought an offering of dried apricots when we visited. Strange bottles of alcohol stood like one of his still-life paintings in the dining room there. And there was always that china container of M&Ms on the counter, waiting to be raided by me and my brother.

I only spent 48 hours in upstate New York before hopping on a plane to come back west. It’s all a fog now, punctuated with scenes of suits and nice shoes, dining room tables and my aunt’s tiny dogs, noodle kugel and roast chicken.

I didn’t have a chance to process anything—the funeral, my grandfather—until I returned home to California. I thought about it all for a while last night, while baking bread. There’s something comforting about the act of kneading. The rhythmic, constant movement relaxes me. Around dusk yesterday evening my kitchen counter was strewn with bowls and wooden spoons, bread pans and thermometers. The flour, which flew around the room as I wrestled with dough, reminded me of the smoke rising off the land around me, remnants of California’s current fires.

My grandfather, a man large in both personality and girth, was a powerful force in my family. Like with the dough, I suppose I’ll always wrestle with my memories of him. Patience is key. It all needs time to rise.
Posted by Molly at 8:04 PM 3 comments:

After graduation Matt and I drove across the country - a trip filled with bumpy back roads and gas-station coffee, crawfish gumbo and BBQ pork, wrinkled maps and unfamiliar accents. There was the humidity of Louisiana's bayou, the deep-red sand of Arizona's canyon, and the rhythmic movement of oil pumpjacks spanning the Texas landscape. We arrived in northern California last week, just in time for me to begin my new job and Matt to hop on a plane and begin his own. Though the change is disarming, it's good. My new home smells like eucalyptus and the ocean. There are farmer's markets, dairy farms, and bread dough already rising on my counter. More soon... 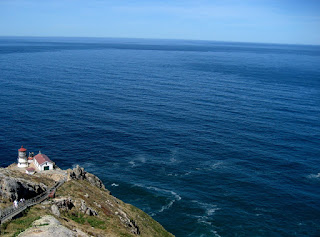