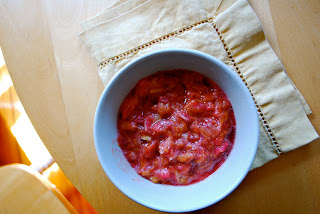 When I was a little girl, my mother made strawberry-rhubarb pies. When she was small, her mother made them, too. If I ever have a daughter, she’ll grow up eating the fruit pies of my past. There’s nothing quite like a recipe studded with memories, one that taste of spice and time. I’ve written about this here before.
Though I had a few bites of a transcendent strawberry-rhubarb pie made by my stepmother the other day, I haven’t made any myself. I haven’t had time to bake. Or to write. Or to even eat, really. This whole “new job” thing? On top of the whole imminent “book publication” thing? Wow. Time has taken on a whole new dimension. It no longer feels traceable, reliable, or manageable at all. It’s moving way too fast; and much, much to slow. It’s hyped up on over-stacked google calendars, on phone dates and deadlines and the electric shrill of my alarm clock. It’s bloated with commuting, with paper work, and the confusing architecture of a new office. The elongated gray faces of the scores of workers heading home on the T at 5pm make the time draaaaaaaaaag.
But I’ve been thinking about rhubarb ever since I picked it up at the market last week. Generally I enter the grocery store with a well-thought list, concrete with recipes lodged in the soft tissue of my brain. This time my plan didn’t included rhubarb, because I really only buy rhubarb to make pie, and I don’t have time to make pie right now. Sometimes, I wonder if I ever will again. I was drawn to its vibrant colors, however: the bright reds, soft pinks and dark forest greens. I bought a whole pile of the slick stalks on a whim, brought them home, and tried to figure out what to do. 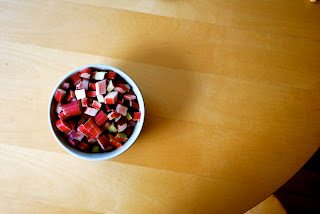 Alice Waters helped.
In her cookbook, Chez Panisse Fruit, Waters writes about rhubarb, which is really a vegetable but often treated as a fruit. It’s tart, crisp, and can be luscious with juice when cooked. It’s excellent in pies and crisps, ice creams, soups, and jams—not to mention alongside rich meats like pork and foie gras. “Rhubarb is the vegetable bridge between the tree fruits of winter and summer,” she writes.
Inspired by Waters’ baked rhubarb compote recipe, I sliced and chopped my stalks and laid the pieces out in a pan. I sprinkled them with sugar, and then with orange juice and zest. Covered in foil, I baked them at 350 degrees for about twenty minutes, then removed the aluminum and baked them for 10 minutes more. What emerged was a silky sweet compote, lush and velvety, but with that familiar tart rhubarb bite. This compote works as a side to something savory—like the fat bone-in pork chops that I served that night, seared on the stovetop and then finished in the oven—or something sweet—like the Greek yogurt I ate for breakfast the next morning. Simple and quick, tart and smooth, like a pinprick pause of flavor in what has become a huge wash of time. 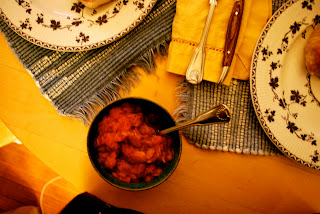 Baked Rhubarb Compote
From Alice Waters’ Chez Panisse Fruit
When I baked this compote, I eyeballed the amount of sugar and orange juice based on the volume of rhubarb spread out in the pan. I’m not sure how much rhubarb I began with, but I added just enough sugar to coat the stalks, and then enough orange juice to make the whole concoction look moist. I used the zest of about a half an orange, too. Here are Waters’ instructions, for those more inclined to follow a recipe with concrete numbers.
1 pound rhubarb, rinsed, wiped dry, trimmed of leaves and tough stumpy ends, sliced in half and chopped into chunks
1 orange (Waters suggests Valencia)
½ cup sugar
Preheat oven to 350 degrees Fahrenheit. Mix together the rhubarb with the sugar, zest of the orange, and about 3 tablespoons of juice in a 9- or 10- inch non-reactive baking pan. Cover and bake for 25 minutes. Remove the cover and bake for another 5 – 10 minutes. A knife should slide easily into the rhubarb. Serve warm.
Posted by Molly at 1:49 PM

Thank you so much for this recipe, as I did the exact same thing at Russo's last week, I also bought this fantastic spring veggie on a whim. I have several ruby stalks waiting to fulfill their compote destiny in the fridge. :)

Just found your blog - it's so lovely.