I spent Sunday morning reading. I don’t yet have a bookcase in my new apartment, so my books are stacked against the walls. In some ways this is a bother: I have to pull my chosen novel out of an already unsteady pile of fiction—cautiously, so that it won’t all topple over onto the floor. But because my books are in piles rather than on shelves, horizontal rather than vertical, mismatched and out of order, they look different than they ever did before, and therefore they seem new. I find myself noticing more among them.

Yesterday morning I pulled a few books out of the stacks—old books, mainly books of poetry, ones that I haven’t picked up in a long time. I read some Billy Collins. He reminds me of college, my freshman year dorm room, and the way I used to scribble my favorite quotes on Post-It notes and stick them to my wall. 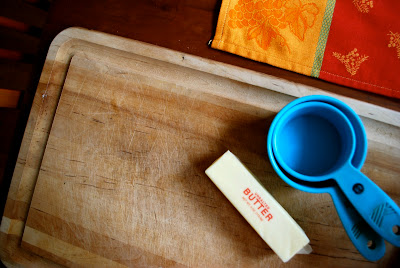 I read some Robert Pinsky. I interviewed Pinsky one afternoon on the phone a few years ago. I remember him as smart and generous and quite kind. Even after we spoke, I reread his poetry for months. Today, the rhythm of his words remind me of the tiny studio in Brooklyn where I lived when I was freaking out about writing my book. That apartment was so small there wasn’t space for a sink in the bathroom. I brushed my teeth at the kitchen counter.

Finally, I read some Philip Schultz. Just a little. I had picked up The God of Loneliness, and, well, I didn’t need too much of that. But in it I read a poem called “Pumpernickel.” It’s a poem about his grandmother, and how she baked bread on Monday mornings—challah and rye, but pumpernickel was the kind that mattered. Pumpernickel was the one that “…demanded cornmeal, ripe caraway, mashed potatoes & several Old Testament stories about patience & fortitude & for which she cursed in five languages if it didn’t pop out fat as an apple-cheeked peasant bride.” 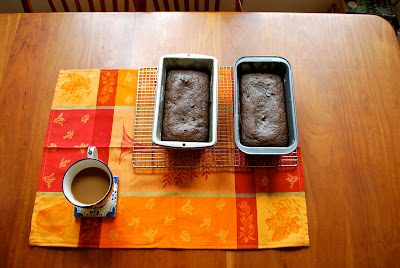 For some people, bread is just bread, and baking it seems a bit much. But it’s worth the bother, and Schultz tells us why:

“For the moment when the steam curls off the black crust like a strip of pure sunlight & the hard oily flesh breaks open like a poem pulling out of its own stubborn complexity a single glistening truth & who can help but wonder at the mystery of the human heart when you hold a slice up to the light in all its absurd splendor & I tell you we must risk everything for the raw recipe of our passion.”

I haven’t made bread in a while. Definitely not pumpernickel. But last week I did bake a cake, for Easter dinner at my mom's house. It was a ginger spice cake with dried cherries, from the most recent issue of Bon Appetit. It’s a simple cake with rich flavor—a compendium of fresh, candied, and powdered ginger; strong coffee; molasses; Dijon mustard (!); and tart dried cherries. It’s spicy and smoky and sweet and when served warm with vanilla ice cream might even be capable of pulling a single glistening truth out of its own complexity. Well, maybe not quite. But close. 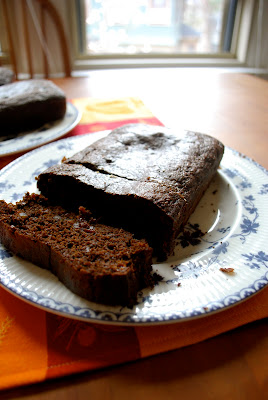 I baked this in two loaf pans, rather than in a bundt pan, so don’t be surprised that mine looks nothing like the Canal House version in the magazine. Because of this pan switch, I baked the cakes for less time then they call for, and was careful to keep a careful watch on their progress. Yes, this cake contains Dijon mustard. And black pepper. That sounds a little wonky, but the cake doesn’t taste like mustard or pepper at all. These ingredients simply heighten the soft and spicy depth of flavor, I promise. The authors recommend serving this with a “luscious chocolate icing.” I think it’s lovely with just a sprinkling of powdered sugar, or served warm with vanilla ice cream. I also think it’s nice for breakfast on its own, but that may be just me. I'm a dessert for breakfast kind of gal.

Preheat oven to 350 degrees Fahrenheit. Butter two loaf pans, or one 6 – 8 cup Bundt pan. Dust the pans with flour and tap out the excess.

In a medium bowl, combine the cherries, crystallized ginger, fresh ginger, and Dijon mustard. Pour the hot coffee over the mixture and set the bowl aside.

Return to the cherry mixture and strain it into a small bowl, reserving the soaking liquid. Add the dry ingredients to the butter mixture in three additions, alternating with the soaking liquid, blending in between. Remove the bowl from the mixer and fold in the cherry solids. Scrape the batter evenly into the two loaf pans, or all of it into a bundt pan.

Bake the loaf pans for about 30 – 40 minutes (for loaf pans), checking carefully. The bundt pan should bake for about an hour. The top of the cake will spring back lightly when pressed in the middle. If you insert a toothpick into the cake’s center and it comes out clean, the cake should be done.

Let the cake cool in its pan on a wire rack. When ready to eat, remove it from the pan, cut it into nice fat slices, and enjoy.
Posted by Molly at 7:18 AM

Baking is like having a massage. Very relaxing. You need to get a book case - promise me you will go to an estate sale and not ikea ;) (not that there's anything wrong with ikea, Im just down with history for bookcases)

This recipe is fantatstic, proper delicious. Thanks for sharing.