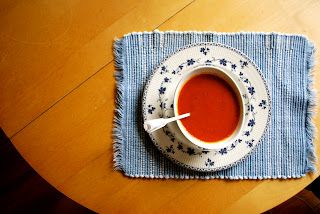 I read Wallace Stegner’s Angle of Repose for the first time a little more than five years ago. I picked it up a few months after the car accident that caused me to lose my sense of smell—those slow, lonely months when I was recovering at my mother’s house in Brookline, Massachusetts.
This book, which won the Pulitzer Prize for Fiction in 1972, is in part the story of a wheelchair-bound historian named Lyman Ward. As the novel begins, Lyman—who already had one leg amputated and is suffering from a crippling bone disease—has moved into the home once owned by his grandparents. Divorced and with a distant son, Lyman moved there in order to begin dictating into a tape recorder the story of his grandmother, a promising artist and writer who followed her husband to the American West a century before. This novel is also hers. Angle of Repose is vivid and tragic, both intimate and impenetrable, one spanning culture and generation. Needless to say: I loved it.
I picked up my old copy of the book, its pages crinkly and yellow with time, again this week. 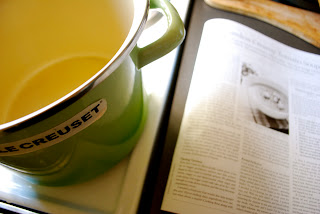 As a preface, I am a re-reader. If there is a book that I love, I will read it multiple times—enough times that sentences echo through my head, the plot seared into my brain. I re-read for some of the same reasons I write: in order to slow down, to make sense of it all. I’ve read some of my favorite books more than a dozen times and I’m actually surprised that I haven’t read this particular Stegner novel more than once. After all, I loved it. I thought about it for years after I put it down. I even went through a short phase in which I gave a new copy of the book to anyone who had a birthday, both family members and friends. But I never again cracked its spine myself.
Re-reading the novel this week, though, I remembered why. Lyman Ward’s bodily decay keeps him a slave to a wheelchair, helpless without human aid. He cannot move by himself, bathe by himself, do anything, really, that requires the use of healthy limbs—something many of us (myself included) often take for granted. Stegner inhabits Lyman’s body and mind in this book. And within it, like Lyman, we readers all yearn for the past.
When I first read this novel I was recovering from the injuries of my car accident—a broken pelvis, fractured skull, the tendons severed in my left knee. And as a result, I could relate to Lyman on a level I had never before known. My injuries were nothing as severe as his, of course. And I certainly wasn’t suffering them all alone. But for the first time in my life, I understood what it felt like to be trapped in a body, to be physically incapable of taking care of myself, to fear the future and long for the past. Re-reading now, I remember how this impressed me, moved me, and totally freaked me out. 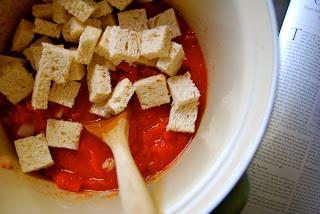 This is all to say that this morning I went on an errand in downtown Boston, one that required a fifteen-minute walk down cobblestone streets. The heels of my boots clicked on the ground, and because it was early and there was hardly anyone else around, the sound echoed on the buildings towering up on either side of the road. It was a hollow sound, an unfamiliar sound. And it reminded me of the way sentences from books like Stegner’s ricochet through my head. For example, one I had just read while on the subway: “She went into the main parlor, got herself a glass of punch, and stood by the west window watching the sun embed itself in long flat clouds.”
There isn’t anything too mind-blowing in that sentence. But as the sharp sounds of my boots echoed on the buildings, the words “west window watching” beat a rhythm in my head. I thought about the sun embedding itself in the clouds, like a journalist in Libya or Iraq, or undercover cops in inner city drug rings, and that struck me as both strange and bold.
And then, later, when I came home and first cooked and then ate some tomato soup for lunch, I read a bit about Wallace Stegner on the Internet. One of the first quotes that came up as attributed to him made me smile. "We write to make sense of it all." Isn’t that true. 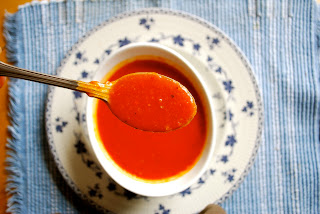 Creamless Tomato Soup
Adapted from Cook’s Illustrated
This is a thick and creamy (yet creamless!) tomato soup. Made with canned tomatoes and the clever twist of white bread for heft, it’s an easy, bright, and flavorful dish. I like to eat it for lunch, while reading a book.
¼ cup olive oil
1 onion, chopped
3 garlic cloves, minced
a pinch of hot red pepper flakes
1 bay leaf
2 28-oz cans whole tomatoes
1 tablespoon honey
3 slices white bread (or vaguely multi-grain, as I used), crusts removed, torn into pieces
2 cups chicken broth
In a Dutch oven or thick-bottomed pot, heat a couple of tablespoons of olive oil over medium-high heat on the stove. Add the onion, garlic, red pepper flakes, and bay leaf. Stir frequently, cooking until the onion is translucent, about five minutes. Add the tomatoes and their juice. Stir together, and then mash with a potato masher (or the back of your wooden spoon) until the tomatoes are broken up, leaving no pieces larger than 2 inches. Add the honey and bread. Bring the soup to a boil and then reduce the heat to medium. Stirring occasionally, cook until the bread begins to break down, about five minutes more. Remove the bay leaf.
Take the soup off the heat. Using an immersion blender (or, transferring the soup in batches to a blender), process until the soup is smooth and creamy, which will take a few minutes. When finished, add the chicken broth. Return the soup to a boil and season to taste with salt and pepper. Serve with a drizzle of olive oil or, as Cook’s Illustrated recommends, some chopped chives, too.
Posted by Molly at 2:34 PM

Many years ago, when I was a freshman in college, a foolish dance move on my part resulted in a destroyed patella and a cast that went from my ankle to my pelvis. My injury is nothing like the one you suffered and have made such an astounding recovery from, but I do understand that feeling of slow lonely months on my mom’s couch (in Western Mass), and that horrible feeling of not being able to care for myself. I don’t remember reading during the recovery or writing a word; just a ton of self-pity and crying. After the couch, the hardest part was navigating my way around my college campus: built in a century where handicapped people were not discussed, the cobblestoned paths were unforgiving on my metal crutches. After nearly a year of physical therapy the doctors declared I could never run, ski or get down and boogie ever again. Thank you for the book recommendation. And thank you for reminding me of how lucky I am to be able to walk and ride my bicycle along the Charles.

Molly, thanks so much for sharing your story. I think it's almost impossible to compare such debilitating injuries as yours and mine, or even Lyman Ward's, as each one comes with its own challenges, trajectory, and state of mind. No matter what, it's a terrifying experience to lose control. I'm so glad you can walk and bike along the Charles, two of my most favorite things to do. xoxo

Ive just finished my dinner, but now I want this. delicious.
Miss T

Hi, Molly. I'm looking for the tomato soup with chickpeas that you mention in your wonderful book. I don't see it here. Thanks. Carola in California