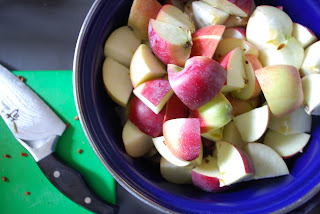 I took the apples that Matt and I picked last weekend and turned them into sauce.  My mother has been making homemade applesauce every fall since I was small, and now October doesn’t feel real if it doesn’t include a steaming bowl or two. 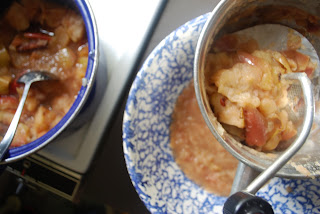 My mother’s recipe is simple—more like a technique, really—and doesn’t take much time.  It requires a food mill, which can be a pain.  But I’ve lugged mine around from apartment to apartment over the last five years just for this recipe here.  Not to overdo it on apples, autumn, and their aromas, but as this sauce cooks, the house fills with the welcome scents of cinnamon and nutmeg, the ripe sugar bouquet of long-baked fruit. 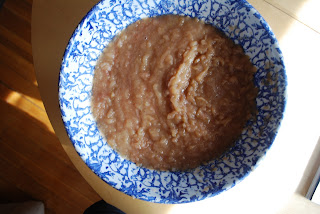 I like to eat it warm in a bowl with a dollop of vanilla yogurt on top, carefully constructing every spoonful so that it includes a small portion of each.  It’s a magical combination, really – hot and cold, creamy and smooth.  As legend has it: this was the only way that my little brother would eat fruit for years. 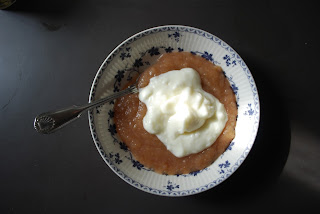 Applesauce
adapted from my mother
1 bag of apples (however many, whatever kind you want) (here, I used a mixture of McIntosh and Macoun)
2 cinnamon sticks, broken in half
ground cinnamon, to taste
ground nutmeg, to taste
1 food mill
Chop each apple in half, and then the halves in half, and then the quarters in half at 90 degree angles.  (Otherwise known as 8 chunks.)  Place in a large pot.  Add the cinnamon sticks and then a healthy dose of ground cinnamon, as well as a few shakes of ground nutmeg.  Add a quarter cup of water to keep the apples from scorching at the start.  Cook at medium-high heat, covered, until the apples begin to bubble away.  Turn down the heat to low, and let simmer until soft.  Then, run the mixture through the food mill, discarding the stem, seed, and skin detritus that is left behind.  Shake some additional ground cinnamon on top.  Serve with vanilla yogurt.
Posted by Molly at 7:23 AM