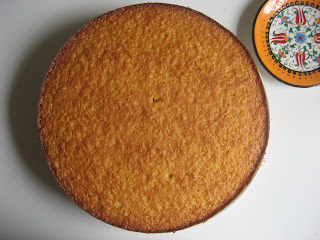 I baked a cake this afternoon. A moist, densely packed almond cake from my well-worn copy of Baking with Julia. I didn't really have a reason to bake. But I wanted to try this one, which is an element of the cookbook's intense Wedding Cake recipe, because I am the designated pastry chef for a friend's wedding late this summer. And I'm nervous. So I'm practicing. Every single cake I bake, I tell myself, will make the finished product just that much better. I have over three months. That's a lot of cakes.

This one is nice. It came out of the oven golden brown and buttery. Almost too buttery, I thought as I sneaked a little sliver to eat with my late-afternoon coffee. But perhaps that will go well later on with layers of lemon curd or blueberry jam, swiss or simple vanilla buttercream. I haven't yet worked out the details. But I know that there will be no fondant. Definitely no fondant. Though lovely on its own, I have a different idea for this particular cake. I'm having friends over for dinner tomorrow and I plan to use it, cut into small disks, as the base for a fleet of individual Baked Alaskas. We'll see how that goes.*

I don't know a whole lot about the science of baking, despite the fact that I love to make and eat cakes of all kinds. I certainly don't know much about the architecture of wedding cakes. But if the testing and tweaking involved in the creation of this one offers me the opportunity to spend more afternoons like today's, procrastinating on thoughts of the real world in my warm apartment, which smelled of almonds and butter, I'm happy to learn. 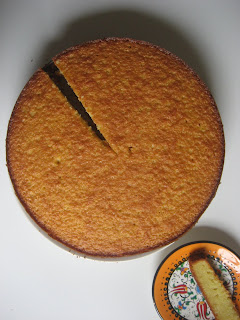 *Update: They went well. A little too much cake to ice cream ratio. But what beats miniature rounds of almond sweet, topped with strawberry ice cream and a cloud of oven-brown meringue? In my mind, not much.

I adapted this recipe a bit, mainly due to ingredient and equipment restraints. Instead of going to the store to buy the extra 2.5 ounces of almond paste, I just used the 7 that I had. Instead of cake flour, I used all purpose. I didn't have a working food processor, and used a hand-held mixer to beat in the eggs rather than a paddle attachment on a standing one. In retrospect, there isn't much I did do exactly according to the directions. This is most likely the reason for my only complaint: the almost too-moist texture of my end result. But either way, I imagine, it's nice. Julia's original recipe is below.

Preheat the oven to 325 degrees F. Butter a baking pan -- I used a single 9" circular cake pan, while Julia's instructions are for a number of different sizes for the construction of a wedding cake -- and then place a sheet of parchment paper, cut to fit, within. Dust with flour, tap out the excess, and put aside.

Put the almond paste, butter, and sugar in a food processor fitted with a metal blade. Process for one minute, scraping down the sides of the bowl as needed. The mixture should be mainly smooth, with a bit of a grainy edge.

Scrape this mixture into the bowl of a standing mixer fitted with a paddle attachment. Add the eggs and beat at medium speed until the batter is smooth. This should take about 3 minutes. Scrape down the sides, again, as needed. Turn the mixer up to high in the final 15 seconds.

Remove the bowl and fold in the flour, a little at a time, with a rubber spatula. Spread into the prepared pan and smooth the top. Bake for 1.5 to 1.75 hours, until the top is golden, the edges begin to spring away from the pan and the top is springy to the touch. For me, this took only one hour.

Transfer to a cooling rack and let sit at least 25 minutes, then invert, remove the parchment paper, and enjoy.

I too love that wonderful swirl of aromas that permeate the kitchen while a cake is baking. It is almost as enjoyable as eating the cake itself!

Fondant is beautiful but I think it tastes awful! I love a beautiful smooth luscious buttercream anyday.

Good luck on the wedding cake. I am sure you will do just fine from the looks of your cake here.

I am making my sister's wedding cake in the spring and am looking for ideas. I want to go with an almond cake, but I was wondering if you think this recipe would go well with fresh whipped cream frosting and a mixed fruit filling. Thanks!

I made this cake for my sisters wedding this past month and everyone loved it! I used Julia's recipe for the cake and layered it with fresh berries and fresh cream frosting. It was just sweet enough and very fresh tasting, perfect for an outdoor summer wedding! Thanks for the recipe!

We used Julia's recipe for our wedding cake 12 years ago. To date, it is still considered by my family (which is large-lots of weddings) to be the best tasting wedding cake ever. We used a simple buttercream frosting and decorated with fresh cut flowers...it was delicious. We actually made the decorating of the cake part of the rehearsal dinner. All the groomsmen spent the night decorating after dinner. Thanks for sharing - I'd lost the recipe. Highly recommend to all.

Positive site, where did u come up with the information on this posting? I'm pleased I discovered it though, ill be checking back soon to find out what additional posts you include. birthday cakes bakersfield ca