The last loaf of bread came out of the oven golden brown and crusty. An instant thermometer stuck in its meaty belly registered a perfect 200 degrees. With hands in oven-mits, I placed it to cool on a rack on the kitchen table. Seven other loaves— equally bronzed, slightly misshapen and dimpled—perched nearby. 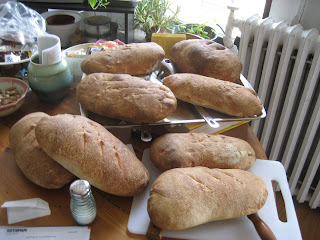 It was not yet 10am on a Saturday morning and the breeze coming through the window fluttered the pages of my open cookbook; I could hear the chatter of kids outside. I threw off my flour-dusted apron and inspected my little herd of bread. For a make-shift bread baking operation—one that involved rough planks of wood covered in parchment to balance rising loaves and reused pickle buckets to hold the fermenting starter—they turned out very well. Cracked and crinkled with good crust and crumb. I was relieved.

Though I’ve been baking a lot of bread lately, this was the first time I had attempted any form of mass production in my tiny kitchen, in my tiny oven. And this bread was important. Sliced, piled on trays, and perched on the white linen of three long dining tables, it was the first thing the 28 guests would encounter as they arrived that night for a meeting of the “roving supper club” orchestrated by me and my friends Ben and Philissa.

Our supper club was an informal, semi-spontaneous gathering of friends—an eclectic group, of all ages and professions—who came together for an evening and an inventive five-course meal. We cooked and served in the spacious apartment of a friend. Ben - a talented self-taught chef and teacher by day - reigns over the savory while I am pastry chef. I have found that baking involves an exacting adherence to science, a precision of touch and aesthetic view; I don't need a full sense of smell to succeed.

We had been talking about beginning this supper club for a while. We had tested recipes and planned menus, debated venues and price. But despite our enthusiasm it was a large undertaking and I was not sure it would ever come to pass. But then (and what felt like suddenly) it did. Emails were sent and RSVPs taken; chairs and tables and crate loads of plates were rented. Menus were printed and tables set.

Ben played with homemade stocks, soups, and picked vegetables. He debated buffalo versus steak. Trout versus tuna. Grits and risotto. Morels and portabella. Sunchokes and ramps. I played with raspberry gelees and peppered biscotti. Ginger snaps and shortbread. Ice cream bases were created on a tipsy Friday at midnight. Fermenting bread base littered my apartment’s refrigerator.

And around 7 on that Saturday night guests began trickling in. Bearing bottles of wine they congregated in the dining room as the light slowly faded outside. Ben and I, sectioned off in the small kitchen with strategically placed tapestries, moved quickly to get everything ready to the background sound of laughter and clinking glasses.

When all twenty-eight guests had arrived and settled in, we gave a few words of welcome and introduction. People sat at the three long, white-linened tables, a menu perched at their place. It was quite a group—mainly friends and friends-of-friends, but ranged 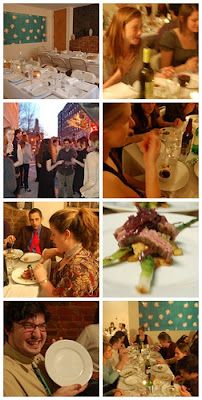 from teenage to grandmother, work colleagues and bosses to dancers and writers, comedians and bankers.

Ben and I scurried back to the kitchen to begin plating the first course. Philissa, who decorated the apartment beautifully, helped serve.

Preparing and executing all that food for so many people was wild and perhaps a bit crazy. It was a night filled with movement and hectic timing. There was a constant sense of urgency; adrenaline soared. The possibility of catastrophe lurked.

We moved quickly through the kitchen—grilling scallions, searing meats, spooning a nutty brown romesco, poaching asparagus. Bent over the white dishes lined on an overturned bookshelf, we plated each course with attentive detail. The close quarters, the heat of the oven and the constant desire for speed reminded me of when I worked in the restaurant in Boston. Time flew. Against the hum of chatter and merriment, I concentrated on the immediate sizzle and sear, steam and boil. I could feel the heat of the oven, an occasional flash of burn on my hands as I grabbed pots and pans, the weight of plates in my hands as I brought them out to the smiling eaters.

Later, guests said that they had no idea how hectic it was in the kitchen. They just registered the calm presentation of food, in evenly-spaced courses. And that was the point, I suppose. Just as when I worked in that Boston kitchen, the steaming speed of the grill line and the Chef, the yelling and the slamming of sauté pans was a world so far removed from the dining room only three feet away. Adrenaline propels the food to its calm destination. 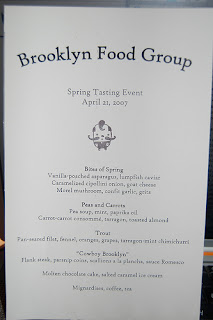 Then came “peas and carrots”: two small bowls, one of pea soup with mint and paprika oil, the other of carrot-carrot consommé with tarragon and toasted almonds. A slice of oozing grilled cheese sat in between.

Next was a seared filet of trout balanced on a salad of fennel, orange, grape, and tarragon-mint chimichurri.

Then, slices of flank steak were laid over parsnip coins, grilled scallions a la plancha, a dollop of a rich and bronze sauce romesco, a dollop of pickled red onions on top.

For dessert were individual molten chocolate cakes nestled in ramekins, a scoop of salted caramel ice cream by its side. I was very proud -- when the piping hot cakes arrived at the tables there were quiet moans of pleasure. Later, with tea and coffee, came plates of ginger snaps and lemon shortbread.

Five courses and three hours later we were done. People were happy, full, tipsy. It was a challenging, exhausting night. One that we hope to do again soon.

Later we went to a nearby bar to decompress and celebrate. It was a day that began with a herd of bread and ended with a round of toasts.

*check out onenicething's flickr page for some beautiful photos!

As always, I am impressed by your writing. You make me wish I had been there.

This reminds me of the big dinner parties my wife and I used to do, about half the size of your BFG. (We still do occasional dinners for friends and family, but not as large and not as often; we're getting old and tired.)

What a wonderful night, Molly, wonderfully told. Your posts aren't nearly as frequent as I'd like [no pressure, I'm just sayin'], but they never fail to impress.

I'm sure your guests were every bit as pleased as you and your team.

Thanks, Bruce. And throwing large dinner parties at any age is recipe for exhaustion, I think. I've never slept so well as I did the entire week after this one.

Terry B, it was indeed a wonderful night, and now that it's over I'm making more time to write :)

this is so inspiring! i would love to do one of these myself, someday. and i love the 'peas and carrots' idea. bravo!