My mom is squeamish when it comes to eating. And while she has made great strides in the last few years (goat cheese, wine) well-known and well-done are the most important descriptors of her food. Her meat always roasts on the grill for crucial minutes longer than anyone else’s, a lone steak ridding itself of all vestiges of pink center. Sushi scares her. The look on her face when I described the three-inch-long insect I (only somewhat hesitantly) consumed while traveling in China last summer was priceless. She thinks tofu is a slimy, disgusting mess and recoils in horror at the thought of many of my “bohemian” eating habits.

She loved, however, my quinoa salad. And as a key component in my crunchy hippy diet, this says a lot.

Quinoa is a relatively new addition to the North American market. It has been cultivated in the Andes for more than 5,000 years, the sustaining force of the Incan diet. Nutritionally, quinoa is a super-grain containing amazing reserves of protein and iron. Technically, however, quinoa is the seed of a leafy plant (distantly related to spinach) and no grain at all. Whatever it is, though, it is delicious. Quinoa cooks to a light, fluffy texture; a soft grain with a crunchy external tail and a deeply nutty taste. Delicate and golden brown, the fragile appearance belies a strong structure that holds up to a myriad of tastes.

This is the most beautiful salad I have ever made, hands down. The colors are phenomenal. It looks like box of crayons, a sky-view of the Macy’s Day Parade, my ridiculous shoe collection. The combination of crunchy vegetables and soft grain combine in a satisfying texture. The zesty marinade does not overpower the fresh taste of the farmer’s market. Three different kinds of toasted seeds give an unexpected richness. 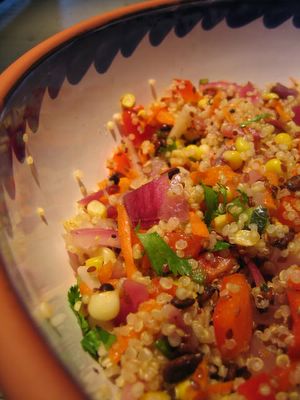 My mom even ate the leftovers. This is a true culinary triumph.

On another, slightly related note: In the past few years I have amassed an odd stock of t-shirts. One reads Alabama: So Many Recipes, So Few Squirrels in block letters across the front. It tickles me (and was on sale). I was decked out in all its squirrel-glory when a pair of young, fresh faced Mormon men came to my door the other day. They were nervous, stumbling over their words. My street was one of the first stops on their two year mission of conversion and they seemed disappointed that I wasn’t all that excited to talk about Jesus. (I don’t know why they were surprised; I live down the street from an orthodox synagogue and next door to a lesbian couple. A Mormon’s mission in Brookline seems doomed to failure.) But when they saw my t-shirt they warmed right up. As it turns out, they have a good friend serving his mission in Alabama. And, they informed me, squirrels are indeed often on the menu there. We chatted about different rodent recipes for a while. They were very nice; I even agreed to read one of their pamphlets on Mormonism.

And now I can’t help but wonder: what do squirrels taste like, and would my mom ever eat one?

-spread seeds on a baking sheet and toast in oven for 10 minutes. Pour them into a bowl and set aside to cool.

-in a small saucepan over high heat, bring 1 ½ c. water to a boil with a pinch of salt. Add the quinoa. When the water returns to a boil, reduce the heat to low, cover, and simmer for 20 minutes or until all of the water has been absorbed. Spread the quinoa on a baking sheet to cool.

-in a pot fitted with a steamer, combine the corn kernels with the red onion. Steam for 3 to 5 minutes, until crisp-tender. Remove to a colander and chill under cold running water. Drain thoroughly.

-add the toasted seeds, quinoa, steamed vegetables, red pepper, radishes, and carrot to the marinade. Mix well and refrigerate for at least 20 minutes to marry the flavors.
Posted by Molly at 10:11 AM

Molly -
What a wonderful discover your blog is. My son attended PA Culinary Institute, and a link appeared on their student site.

As a So. Texan, I can be considered "southern", and so, have some experience with eating squirrel. The quick answer is "tastes like chicken", and in fact that would be fairly close to the truth. But the real story on squirrel is much more complex. I've had them stewed, fried (best), and braised... Young is best, old is to be stewed only, if eaten at all. The hunt is, at least as much fun as the eating. We have a squirrel dog (called "Feist dog"), who lives to spot squirrels. His purpose is to tree the squirrel, and spook them to the side of the tree which the hunter patiently waits on. If you chase a squirrel, it will just keep running round the tree until it can't see you... in a never ending circle... unless you stand still, and have a dog that will bark enough at the squirrel to cause it to come your way. A small gauge shotgun it best. I'd volunteer to send you one frozen, but, like most wild game, it's best enjoyed fresh.
Again, enjoy your blog, and will keep up with your blog...

I'm in the process of reading your entire blog and want to tell you that I think you're quite talented as a writer. Best of luck to you in Culinary school.

"I just came across your blog about **keyword** and wanted to drop you a note telling you how impressed I was with the information you have posted here. I also have a web site & blog about penny stock symbol so I know what I'm talking about when I say your site is top-notch! Keep up the great work, you are providing a great resource on the Internet here!"