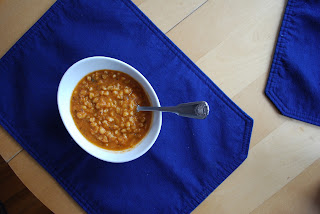 When I was in college, I read an essay by the novelist Pat Conroy in Gourmet magazine. I had recently returned from a semester in Italy, enamored of the bite to pasta al dente and the clover-green hue to pistachio gelato. Each morning in Florence I had walked to class through the marketplace in the Piazza San Lorenzo, where I was greeted by the sight of sweet summer strawberries, meltingly red ripe, and scent of fresh filets of salmon, which the fishmongers kept on ice.
Conroy’s piece was called The Romance of Umbria. Originally published in 1999 (and reprinted in Endless Feasts, a compendium of sixty years of writing from Gourmet, edited by Ruth Reichl), it was about the Italian honeymoon he took with is second wife, a southern gal named Sandra King Ray of Pinckard, Alabama.  Since they met: “I am finally living the life I think I was meant to live.” 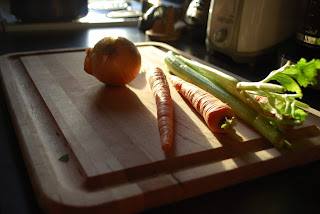 Conroy describes walking through a local market with Sandra, who is “stunned by the profligate abundance taken from the countryside.” Together, they
“…inspect great albino-faced cauliflowers, eggplant displays that look like a rack of bowling balls, porcini mushrooms the size of kittens, the cool anise-smelling fennels that always look like failed cacti to me, and the mounds of huge, brilliantly yellow peppers that make their space look like the entrance to a gold mine.  Blood-red oranges from Sicily are sliced open to reveal exactly what shade of dripping scarlet is inside.  When I reach to taste a sprig of mint, a fierce old Italian woman, who probably was part of the crowd that murdered Mussolini, slaps my hand firmly and wags a gnarled finger at me.  Her finger looks truffly, which somehow pleases me.”
In the months after returning from Italy, I re-read that sentence about the truffly finger over and over again.  I loved it.  Today, though, picking up this piece for the first time in years, I was struck by something else:
“We wander from stall to stall, the food so fresh that the smell of the earth itself is the strongest, most assertive odor in the marketplace until we pass the store that specializes in the sale of local white truffles.  The odor of truffle is as distinctive as the giveaway scent of marijuana.  It enlarges the air around itself and gives you some idea of what a tree must smell like to itself.”
What must a tree smell like to itself? I wonder. Truffles sound about right. 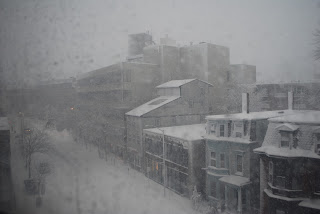 Anyway, I picked up The Romance of Umbria again for a very simple reason: Soup.  I had made a pot of Tuscan Farro and Bean Soup, or Minestra di Farro, the previous afternoon.  It’s the kind of soup that I often ate in tiny trattorias abroad, all thick with beans and tomatoes and herbs. Yesterday I sat at my kitchen table in Cambridge, in the middle of a workday with a bowl of soup and some leftover rosemary focaccia for lunch.  I watched the snow fall into thick, heavy piles on the streets.  I thought about warm summer days in Italy, about the markets where wrinkly grandmothers sold fresh peaches and herbs.  And I remembered the truffly fingers.  I rooted the Conroy out. 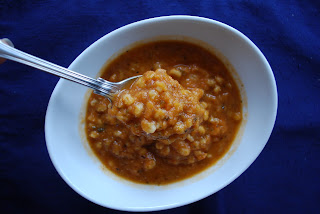 Tuscan Farro and Bean Soup
Adapted from Beth Elon, author of A Culinary Traveler in Tuscany, and Gourmet
This soup is slow cooking at its best: Perfect for a snow day, or a lazy Sunday afternoon.  The hearty broth is thick with pureed beans and perfumed with fresh herbs and garlic.  The farro (or barley) is puffed, chewy, and fine.
1 cup dried cranberry beans
2 tablespoons olive oil
1 large onion, chopped
3 carrots, chopped
2 ribs of celery, chopped
2 garlic cloves, smashed and peeled
10 cups water
1 can diced tomatoes
¼ cup flat-leaf parsley, loosely packed
10 fresh sage leaves
3 sprigs thyme
1 cup farro (or barley, as I used.)
2 and ½ teaspoons salt
½ teaspoon black pepper
Pick over and rinse beans.  There are two options here.  First: Soak the beans in cold water, covered by 2 inches, for at least 8 or up to 12 hours.  Or: Put the beans in a big pot and cover them with 2 inches of cold water.  Bring to a boil, uncovered, and boil for 2 minutes.  Remove from heat and let stand an hour before draining well.
Heat oil in a large pot over medium heat and cook the onion, carrots, celery, and garlic, stirring occasionally, until the onion is soft but not brown, about 10 minutes.  Add the water, drained beans, tomato, parsley, sage, and thyme.  Bring to a boil and then reduce to a simmer.  Cook, partially covered, until the beans are tender, 2 – 3 hours.
Discard the sprigs of thyme.  Off the heat, blend the soup until smooth using an immersion blender—or in batches using a Cuisinart or standing blender.  Back in the pot, bring the soup to a boil.  Add the farro or barley and the salt.  Simmer for 30 minutes, or until the grain is tender.  Stir in pepper. Serve.
(This soup can be made up to 5 days ahead and stored covered in the fridge.  Use water to thin the broth when reheating.)
Posted by Molly at 12:25 PM

You are obviously in your 'food groove.' Yum.

wow, so much of this post resonates with me - i spent last semester in florence italy and remember the san lorenzo market very clearly... my favorite market was probably the sant'ambrogio market - and just seeing the colors and the wonderful variety of fruits and veggies... i also currently reside in cambridge...and farro is my favorite grain!! (i had farro soup many nights while in florence...)

Natalie, I remember the Sant'ambrogio market! Very cool. You'll have to let me know where you go for good Italian food in Cambridge...

Molly, you write SO well. I pre-ordered your book as a result of this post! :)

Thanks, Holly. That means a lot!