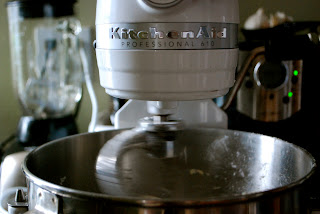 Last night my mother and her boyfriend, Charley, came over for dinner. We often eat together on Sunday evenings—sometimes at their house, which is across the river in Brookline, and sometimes at our apartment, which is teeny-tiny in Cambridge. When they come here, they always bring their standard poodle, Lily, who spends the night jumping up and down, waggling her little fur-ball tail. 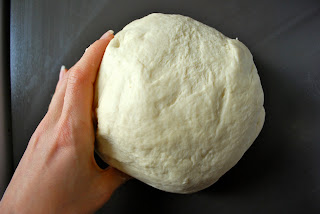 For this Sunday supper, I decided to make a dish that I had seen in an old Jamie Oliver cookbook, one that I had bought at a second-hand bookstore this summer in Maine. Pork chops with Parsnips, Pears, and Potatoes. I admit: I chose it because of the alliteration. I like the way the words sound. I learned: that wasn’t a good idea. This dish was mediocre, monochromatic, and mundane. (Hah!). 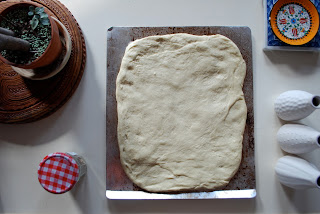 As much as I cook, as much as I love to write about my kitchen triumphs here, I do fail. Quite often, in fact. More often than I’d prefer to admit. There’s the flat, lifeless loaf of bread. The bland, tough chicken breast. The dry coffee cake I just can’t make myself throw away. Failing in the kitchen is part of the learning experience, I tell myself. I try not to let it bother me. After all, as Julia Child once said: "The only real stumbling block is fear of failure.  In cooking you've got to have a what-the-hell attitude.” 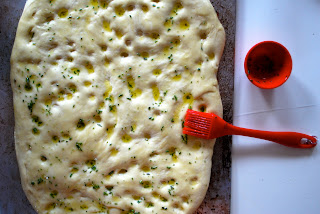 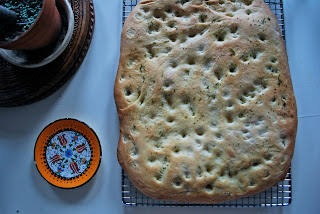 This crusty, salted, rosemary bread recipe, adapted from Gourmet, only uses five ingredients. It takes some time to rise, but it’s worth it in the end. It’s an easy entry into working with yeast breads, if you never have before. In fact, I think it would be pretty hard to fail. (But it’s okay if you do! What-the-hell!) 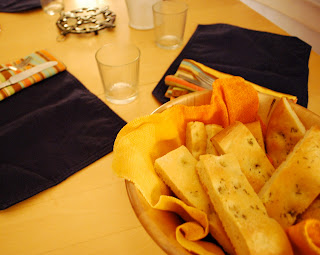 Rosemary Focaccia
Adapted from Gourmet
This bread is great cut into strips and served with more olive oil for dipping, or in order to mop up some kind of sauce.  It’s also pretty awesome when cut into a more hefty square, sliced in half, and turned into a sandwich, one that your boyfriend takes to school for lunch.
1 (1/4-ounce) package active dry yeast
4 cups (+ or – 1 additional cup) all-purpose flour
1/4 cup plus 3 tablespoons extra-virgin olive oil
1 tablespoon finely chopped fresh rosemary
1 teaspoon coarse sea salt
Stir together 1 and 2/3 cups lukewarm water (between 105 and 115 degrees Fahrenheit) and the yeast in the bowl of a standing mixer. Let stand until creamy, about 5 to 7 minutes. Then, add the 4 cups of flour, 1/4 oil, and 3 teaspoons of table salt. Beat with a paddle attachment on medium speed until the dough forms. Replace the paddle with the dough hook and knead the dough at high speed for about 3 to 4 minutes, until it’s smooth and sticky. Add more flour if needed. (I used an additional half cup of so.)
Turn the dough onto a floured surface and knead for a couple minutes with your hands, adding flour if necessary. The dough should be slightly sticky. Transfer it to an oiled bowl, turn to coat, and then cover with plastic wrap. Let the dough rise at a warm room temperature until it doubles in bulk, around 1 and ½ hours. (Or more. My apartment is on the cooler side, so I let it rise for close to 3 hours. You can’t rush bread dough, I’ve learned.)
Press the dough evenly down onto an oiled baking sheet. Let it rise again, covered in a kitchen towel, for an hour or so, until it again doubles in bulk.
Preheat the oven to 425 degrees Fahrenheit.
Stir together the rosemary and remaining olive oil. Make shallow little indentations all over the dough with your fingertips. Brush with the rosemary oil, letting it pool in the shallow craters. Sprinkle sea salt all over. Bake in the middle of the oven until golden brown, 20 – 25 minutes. Immediately transfer to a cooling rack. Serve warm or at room temperature. 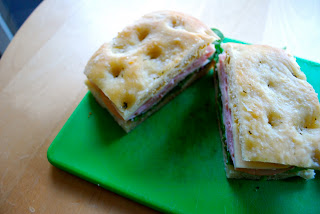 wow that focaccia is stunning! i loved this post, it is so picturesque! i actually am a student in cambridge, so it's nice hearing names of cities like cambridge + brookline, so familiar =)

i also spent last semester studying abroad in florence italy so focaccia brings back fond memories! though i have to say yours looks even more beautiful than a lot of focaccia i saw/had in italy!

I know all about meals that just don't pan out. It's disappointing to say the least. But then, like you said, a new success is right around the corner and this bread looks amazing. Thanks for a nice read. I also like the photo of your kitchenAid:)

Natalie: thanks! Glad to hear from a neighbor. Hope you're staying warm in this snow. I spent a semester studying in Florence back in 2003 (wow, typing that makes me feel old!)- I loved the eating (especially bread-related eating) in Italy best.

Sharon: Oh, how I love that KitchenAid. I take more pictures of it than I'd also like to admit.

Molly your blog is brilliant and your story so very inspiring. I'm so happy you're doing so well. Congratulations on your mention on the New York Times site.

What if you don't have a mixer/food processor?

Nicola! So good to hear from you. It's been a million years, no? Glad you're doing well, too.

Anonymous: You can certainly knead this dough by hand. Just make sure you knead it until it's smooth yet still slightly sticky. And do let me know how it goes!

rosemary focaccia is one of my favorite things in the world. on my search for a recipe, I found your blog. really love it. thanks for doing what you do.