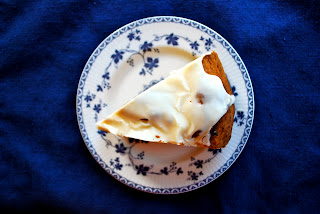 The first King Cake I ever tasted arrived at Matt’s Upper West Side apartment smushed in a plastic bag. Matt’s mother had sent the traditional iced brioche by mail from New Orleans, where they’re from, and it had had a rough trip north. But smushed or not, we ate the whole cake—garish in its purple, green, and yellow sugared icing—within a day or two.
At this point, Matt and I been dating, oh, maybe just a couple of months. A liberal, Jewish girl from the Northeast and a conservative-leaning, Iraq vet from the South? We both had a lot to learn. King Cake, a gastronomical ritual for Mardi Gras and one of Matt’s favorite foods, was a good place to start. 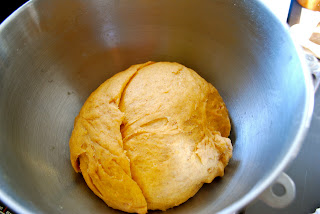 This King Cake was delicious, as I quickly discovered: sweet and flaky, kind of like a cinnamon bun on drugs. I also learned that Matt is very particular about his King Cakes. And in New Orleans, there are many different kinds: thick or thin, twisted or braided, filled with jam or cream cheese or nothing at all. This one, a simple version from Haydel's Bakery, Matt told me, is the best. Nothing else counts.
My first piece of that cake went down smoothly. It was perfect with a mug of coffee. Or in Matt’s case, a glass of milk. On my second, though, I felt my teeth hit against something hard. Something smooth yet pointy. I pulled the object out of the flaky dough and held it in my hand: a tiny plastic baby.
What?!
“You found the baby!” Matt said. “That means that you have to buy the next one.”
“The next what?”
“King Cake.”
“Oh.”
Well, three years and many King Cakes later, I’m still trying. Yesterday I decided to make one from scratch. 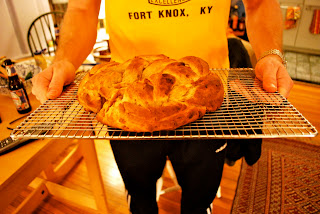 I used a recipe from John Besh’s beautiful cookbook, My New Orleans. It made a buttery, egg-laden dough, which when kneaded by hand turned out smooth and elastic. It rose once and then, separated into thirds and braided into a circle, it rose again. And last night around 9 p.m., my homemade King Cake came out of the oven puffy and golden brown. I watched as Matt circled it on the wire rack where it cooled, sniffing its cinnamon-spiked steam.
“That’s not a King Cake,” he said, finally.
“Yes it is!” I said, indignant.
“Nope,” he insisted. “It’s too round and brown.”
“Wait until I put on the icing.”
“Do you have the Mardi Gras colors?”
“Well, no.” Pause. “I couldn’t find them at the store.”
“Nope, then it’s not a King Cake.”
Harumph. 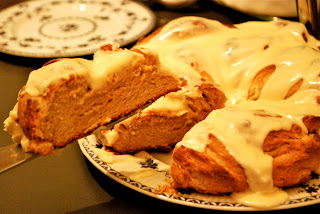 But after the icing—warm and gooey with condensed milk and powdered sugar—cooled on top of the cake, we each ate a slice. (Or two: Matt!). The cake was warm and moist, sweet and lightly spiced.
I loved it. And so did Matt. But I’m only allowed to write that as long as I make it very clear that he doesn’t believe it’s a King Cake. Fine.

I’m just going to have to wait until Matt finds the tiny plastic baby, one that I saved from our last Haydel's King Cake and then burrowed into a secret doughy spot last night. Maybe he’ll believe me then. And if not, at least it will be his job to buy the next one. 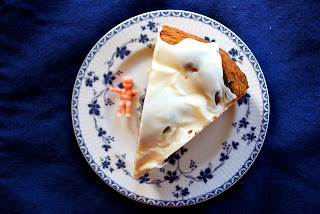 “King Cake”
Adapted from John Besh’s My New Orleans
Cake:
1 cup lukewarm milk (about 110 degrees Fahrenheit)
½ cup granulated sugar
2 tablespoons yeast
3 ¾ cups all-purpose flour
1 cup melted butter
5 egg yolks, beaten
1 teaspoon vanilla extract
1 teaspoon grated lemon zest
3 teaspoons cinnamon
a pinch of fresh nutmeg
Icing:
2 cups powdered sugar
¼ cup condensed (evaporated) milk
1 teaspoon fresh lemon juice
purple, green, and gold decorative sugars [optional, but don’t blame me when no one believes you when you tell them that you’ve baked a real King Cake]
1 plastic baby [to hide in the cake after baking]
First, the cake: Pour the warm milk into a large bowl. Add the sugar, yeast, and 1 heaping tablespoon of flour. Whisk until the sugar and yeast have dissolved.
Once bubbles have developed on the surface of the milk and it’s begun to foam, whisk in the butter, eggs, vanilla, and lemon zest. Add the remaining flour, cinnamon, and nutmeg and fold in with a rubber spatula until the dough begins to come together and pulls away from the side of the bowl. Now, form the dough into a ball, and knead by hand on a floured surface until it’s smooth and elastic, about 15 minutes. (Alternatively, you can knead in a standing mixer with a dough hook for about 5 minutes.) Place the dough back in the bowl, cover loosely with plastic wrap, and let it rise for 1 ½ - 2 hours, until the dough has doubled in size.
When the dough has finished rising, preheat the oven to 375 degrees Fahrenheit.  Punch down the dough and divide it into 3 equal pieces. Roll each piece between your palms to form a long strip, like a rope. Braid the three ropes together, and then form the braid into a circle, pinching the ends so that they stick. Place the braided loaf onto a nonstick cookie sheet, and let rise for another 30 minutes to an hour, until it’s again doubled in size.
Now, bake for 30 minutes, until the cake is a pale golden brown and the kitchen smells like cinnamon. Let cool.
While the cake is cooling, whisk together the powdered sugar, condensed milk, and lemon juice in a bowl until it’s smooth. Spread the icing over the top of the cake and sprinkle with the sugars (if you have them) while it’s still wet. Tuck the baby up into the underside of the cake. Enjoy!
Posted by Molly at 1:20 PM

Well, if it's not a real King Cake, you could always call it a Pretender To The Throne Cake. Or perhaps a Dauphin Cake, as close enough to be an heir apparent.

Hah! Heir apparent. I love that.