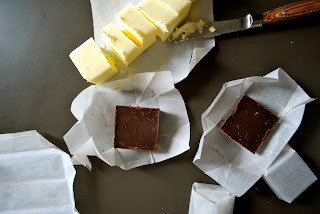 Today I’m taking the train down to Providence, Rhode Island, for my first official public speaking gig. It’s not a huge deal—just a panel of young science writers talking about our work. But it’s the first time I’ll be getting up in front of people—real people! people I don’t know!—and talking about my book. I suppose I’ll get used to it at some point. But right now, that feels far off.
I began to grow nervous about the event over the weekend—on Saturday afternoon, to be exact. That was right about when I realized that I should write down my thoughts in order to avoid rambling for fifteen minutes on stage. Lets just say I’ve been a bit on edge.
Saturday morning had been nice, though. I went for a run along the Charles River. It’s been months since I have been able to run outside. But this past week the weather relented just a bit, the ice melted off the sidewalk, and I took full advantage. I’ve missed the feeling of the sun on my face, even if it’s a sun that comes with the cold bite of winter wind.
When I came home, I showered and dressed. I made myself a cup of tea and sat at the kitchen table with a blank Word document open on my computer. I took a moment to collect myself—noticing the angle of the photographs hanging on the wall (perfectly straight, thanks to Matt’s obsessive use of a level) and the stems to the white orchids growing in a pot on the table (dipping delicately to the right). The living room was filled with afternoon light. I could feel the steam of my tea on the soft flesh of my palm and could hear the whine of our refrigerator, the distant clop clop of shoes on the street. Generally I love that moment of stillness, of almost-silence, before I begin to write. 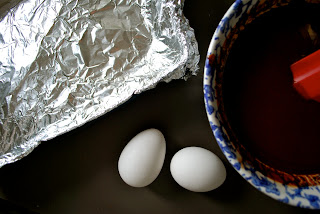 But as it turned out, I was too anxious to do much of anything. No writing. No reading. I felt too jumpy to even surf the ‘net. I decided to bake.
I found the recipe for Alice Medrich’s “New Classic Brownies” on the New York Times’ website. They looked crazy good, and so I immediately pulled an apron over my head and got to work. In the kitchen, I melted some butter with thick squares of unsweetened chocolate over a double boiler. Off the heat, I stirred in sugar, eggs, vanilla, and flour. I poured the batter into a foil-lined pan, which I then plunked into the oven.
It was only after a good fifteen minutes—right about when the kitchen began to smell like chocolate perfume—that I realized my first mistake. I had doubled the amount of butter. Two sticks instead of one. 8 ounces instead of tablespoons. Whoops.
But I rationalized: butter is delicious. These brownies will be okay. They had to be. Because if they weren’t, then not only would I be too anxious to write a speech, but I would be too anxious to effectively procrastinate on writing a speech. And where would that leave me? Totally useless! 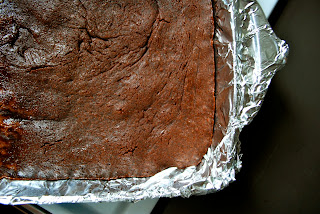 When I pulled the brownies out of the oven, I was happy to find that they looked intact despite my gaff. I placed the sizzling-hot pan into an ice-cold water bath, as Medrich instructs. And that’s where I committed my second crime: I turned my back.
I returned to the kitchen a good ten minutes later to find that water from the ice bath had somehow seeped into the brownie pan. Half of them were totally soaked. They were sloppy and soft, like a soggy piece of bread. Gross.
Of course I quickly yanked the brownies out of the pan, holding onto their foiled edge. I did the only thing I could do: I used my chef’s knife to amputate the waterlogged chocolate limb, a desperate attempt to save the rest. The survivors kind of fell apart in the process of rescue, but I still had hope that they would taste all right.
They didn’t.
But let me tell you, anxiety plays strange tricks on your mind. Because I ate these brownies. And objectively, I knew that they were subpar. But at the same time, they were perfect. 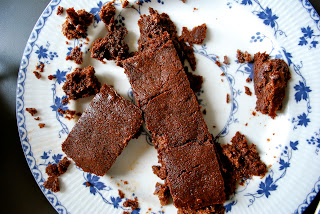 Dear Molly,
Congratulations!
I frequently under or over butter when I stress bake, but I guess it's the act itself which counts more than no-oil cake or waterlogged brownies :)

Chihiro, glad to hear that I'm not alone! xo