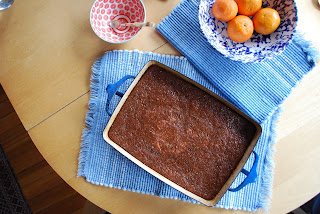 Today I spent a few hours looking through my cookbooks. I wanted some inspiration. It’s been a while, I realized, since there’s been a dish that I’ve craved, something that’s really moved me to cook. Between the travel and the snow, we’ve been eating simply around here. I’m wondering if I should implement some change.
I stood at my bookshelf for some time, reading the titles, touching the hardcover bindings, breathing in their scent. I brought a pile back to the kitchen table, where I sat with a mug of Earl Grey tea and flipped through the pages of a few books, old friends that I haven’t opened in many months. I read about homemade ricotta cheese, about the uses of za’atar, and about the optimal techniques for cooking salmon on the stove. I paused for a few minutes in Nigel Slater’s lyrical cookbook, The Kitchen Diaries.
“The air is clear and cold, and there are paper-white narcissi in a bowl on the table, filling the kitchen with their gentle, vanilla smell,” he writes in his January 30 entry. “Winter at its purest.” 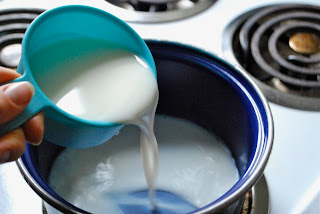 I picked up The Cookbook Collector, a novel by Allegra Goodman—which, of course, isn’t a cookbook, but certainly talks a lot about them.
In one scene, Jess, a philosophy student living in Berkeley, California, catalogues a large, unique collection of antique cookbooks. She spends hours a day immersed in ancient recipes. And despite the fact that she’s not a cook, nor does she even eat meat, she is infatuated.
… Jess, who had spent the past year struggling with Kant’s Critiques, now luxuriated in language so concrete. Tudor cookbooks did not theorize, nor did they provide separate ingredient lists, or scientific cooking times or temperatures. Recipes were called receipts, and tallied materials and techniques together. Art and alchemy were their themes, instinct and invention. The grandest performed occult transformations: flora to fauna, where, for example, cooks crushed blanched almonds and beat them with sugar, milk, and rose water into a paste to caste Rabbets, Pigeons, or any other little bird or beast. Or flour into gold, gilding marchpane and festive tarts. Or mutton into venison, or fish to meat, or pig to fawn, one species prepared to stand in for another.
Cooks turned pigeons out of pies, plumped veal with tongue and truffle, stuffed bustard with goose, with pheasant, with chicken, with duck, with guinea fowl, with teal, with woodcock, with partridge, with plover, with lapwing, with quail, with thrush, with lark, with garden warbler, so that each bird contained the next, each body enveloping one more delicate in mystic sequence, until at last the cook stuffed the warbler with a single olive, as though revelers might finally taste music, arriving at this round placeholder for breath and open voice. Edible decibels. Savory olive for sweet song.
Something about that passage that moves me. Perhaps it's the time and intensity of the recipes that Jess reads; the names of birds I didn’t even know existed; the magic of cooking, of turning one thing into something completely new. Perhaps it’s simply the fact that Goodman’s words have rhythm: “Edible decibels. Savory olive for sweet song.”  I love that. 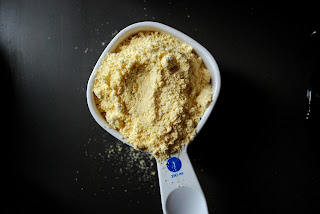 Suddenly inspired, I pulled out my oldest cookbook from the shelf, which is really not so old. It’s Craig Claiborne’s Cooking with Herbs and Spices, a 1970 paperback complete with well-used grease stains and pages yellowed with age. I had taken it from a box of discarded cookbooks up in storage at my father’s house. Apparently we used to have this volume in my childhood home. Turning its pages today, I can still see my mother’s spider-scrawl in the margins.
This book contains recipes organized by individual herb and spice. For each, Claiborne gives a bit of background, some tidbits of knowledge and lore before jumping into food. I looked up rosemary, one of my favorites. The scent of this herb was one of the very first to return in the years after I lost my sense of smell. It came bursting into my sensory consciousness while I chopped up a pile of fresh leaves, preparing a lamb dish for dinner. Fitting. Rosemary is "notable with lamb and pork," Claiborne writes. I’ll never forget that first whiff. It brought me immediately back to a moment in my past, a horseback ride in the forest out West, a child on a family vacation, breathing in the scents of the earth. Claiborne approves: "Rosemary is for remembrance," he writes. 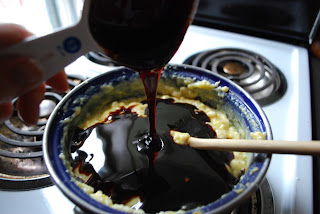 I opened to the section on cinnamon. “Cinnamon is the bark of the cinnamon tree and its value can scarcely be estimated,” Claiborne says. “It is important for pickling and it is difficult to imagine rice pudding without it.” True.
But in this section I focused on a recipe for another pudding—Indian Pudding, the traditional New England dessert made with cornmeal, milk, and molasses. This recipe was sent to Claiborne by a reader whose mother had clipped it from the Boston Globe 25 years earlier. It arrived with a note: This recipe was taken from a seared and yellow scrapbook in Widener Library at Harvard University, and without a doubt can’t be beat.
I live around the corner from that very library! I took this to be a sign, and so I made the pudding myself. As Claiborne writes: "It’s excellent." 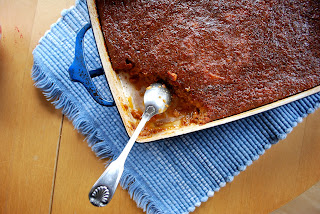 Indian Pudding
From Craig Claiborne’s Cooking with Herbs and Spices
This pudding comes together quickly, but then bakes slowly in low-heated oven for hours. When it’s done, the edges have just started to pull away from the pan and the middle is set, but still a tiny bit jiggly. Scooped in a bowl, the pudding is soft and creamy with just a bit of chew from the very top crust. It smells like cinnamon and molasses, like corn and ginger and cloves. It tastes like Christmas. Eat it hot with vanilla ice cream, or, as I did, with a scoop of greek yogurt.
4 cups milk
1 cup yellow cornmeal
2 eggs, lightly beaten
1/3 cup vegetable shortening *
1/2 cup sugar
2/3 cup molasses
3/4 teaspoon salt
1/2 (heaping) teaspoon cinnamon
1/4 teaspoon ground cloves
1/4 teaspoon ground ginger
1/8 teaspoon allspice
1/8 teaspoon nutmeg
*In Claiborne’s original recipe, he calls for minced suet—an ingredient I don’t have lying around, nor would I even know where to buy.  I used vegetable shortening instead.  It worked just fine.
-Preheat the oven to 325 degrees Fahrenheit.
-Bring the milk to a boil in a pot on the stove.  Add the cornmeal gradually, whisking vigorously.  When the mixture begins to thicken, set aside to cool.
-When cool, or nearly so, stir in the rest of the ingredients.  Mix well.
-Pour into a buttered baking dish and bake for about 2 hours (mine took 1 hour, 45 minutes).  Serve hot, with vanilla ice cream (or yogurt). Enjoy! 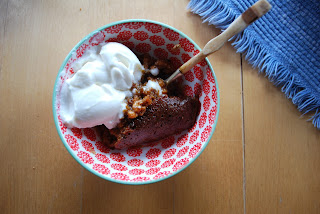 I had the exact same Sunday you had, sipping tea and visiting old and forgotten cookbooks. I've actually been contemplating Indian pudding for more than a month now, shuffling between three or four recipes that sound sweet and luxurious. Thanks for this one, I will definitely add it to my ever-increasing Indian pudding recipe pile.

Oh I love this post and its description of the lyrical quality of cookbooks. I have this obsession with cookbooks and just like to sit and read them.

I think in winter we all seek comfort food. My weekend was spent going back to the old standard dishes of my childhood, things that were the standbys of my mother and grandmothers. Somehow, when learning to cook I went and learned to make dishes I never tried as a child from countries that I only knew of from books. So this weekend, I roasted a whole chicken for the first time (I've been cooking for 10 years and never roasted a chicken). And then I took the bones and made stock and the next day made chicken soup from scratch. It was comforting to have old family favorites.

I really enjoy your blog and particularly this post. I love to peruse old cookbooks and discover something long-lost. Hope you have a minute to check out my blog, http://orangemadeleines.blogspot.com.

Good morning! I'm happy to hear that we all love to read old cookbooks...

Molly, sounds like a perfect Sunday to me! I say just go ahead and make one of your pudding recipes. It's totally worth it...

Sarahdipity, I agree, winter is the time for comfort, and nothing is better than a roast chicken. I can see why it's been a kitchen staple for generations...

Sharon, thanks for the link. May we all find recipes long lost! xo