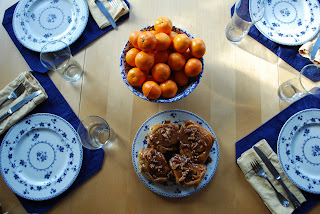 As I write, it is Sunday morning and raining outside.  I can hear the church bells across the street, the cars zipping through puddles, the creaky footsteps of my neighbors upstairs.  The apartment is warm, warmer than it’s been in weeks, and the kitchen smells like citrus because of the bowl of clementines, of which I’ve eaten nearly half, sitting on the table to my right.  Matt is at the library, and I am here alone.  The sticky buns are staring at me from across the room. 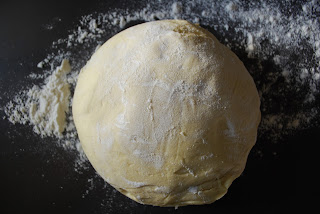 I baked a batch of these sugary buns last year.  We ate them on Christmas morning, just like I did as a kid.  They were sweet and flaky and not too hard to make.  This year, I baked another batch from another recipe, this time for brunch on New Year’s day.  These sticky buns—from Joanne Chang’s new cookbook, Flour—were big and moist, almost obscene in their thick coat of pecans and buttery goo.  When Matt thumped one down on his plate while sitting at the table with mimosas and friends, it echoed with such tenor that we all began to laugh.  These sticky buns aren’t for the weak or weary.  They’re awesome.

I made them in small steps, over the course of three days.  First: I mixed and kneaded the brioche dough, which I then let rise in the refrigerator overnight.  The next day I rolled it out into a rectangle, filled it with a mixture of cinnamon and sugar and pecans, and then rolled it back up into a log.  Sliced into eighths, again the raw buns proofed in the refrigerator overnight. 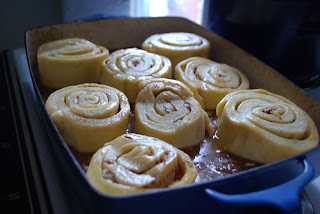 On Saturday morning, New Years Day, I made a sauce out of butter, brown sugar, honey, and cream. I spread it in a pan, sprinkled it with more nuts, and placed the buns on top.  After 45 minutes in the oven they emerged smelling like cake, like caramel, like all the Christmas mornings of my childhood.  They also emerged the size of my skull.  These sticky buns were huge. 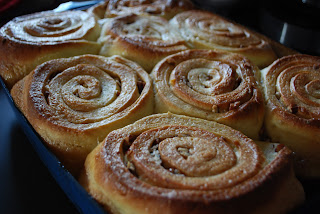 Later, I would read on Joanne Chang’s website that there is a typo in her cookbook.  Instead of using an entire recipe of brioche dough, I should have used only half.  But I don’t know. I liked the plump extravagance of these buns.  They sat on the serving tray with sticky authority, confident in their considerable girth.  Eat me, they commanded.  We did. 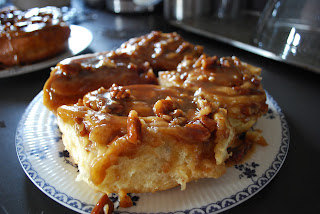 “Sticky Sticky Buns”
Adapted from Joanne Chang’s Flour
Note: I am writing the recipe as I made it, with the full batch of brioche dough. If you want to go the way it was originally intended, you still need to make the full recipe of brioche dough in order for the proportions to work (and the dough hook to be effective in the standing mixer), but halve the amount of that you use for the buns and freeze the rest.
Goo:
3/4 cup unsalted butter
1 and 1/2 cups packed light brown sugar
1/3 cup honey
1/3 cup heavy cream
1/3 cup water
1/4 teaspoon salt
Brioche Dough:
2 and 1/4 cup all-purpose flour
2 and 1/4 cup bread flour
1 and 1/2 packages active dry yeast (3 and 1/4 teaspoons)
1/2 cup plus 1 tablespoon sugar
1 tablespoon kosher salt
1/2 cup cold water
6 eggs
1 cup plus 6 tablespoons (2 and 3/4 sticks) unsalted butter, at room temperature, cut into 10 – 12 pieces
1/4 cup packed light brown sugar
1/4 cup granulated sugar
1/8 teaspoon cinnamon
1 cup pecan halves, toasted and chopped
To make the brioche:
In a standing mixer fitted with the dough hook, combine the flours, yeast, sugar, salt, water, and five of the eggs.  Beat on low speed for 3 – 4 minutes, until all of the ingredients have come together.  Scrape down the sides of the bowl as needed.  Once it’s together, beat on low speed for an additional 3 – 4 minutes.  The dough will be stiff and seem dry.
Still on low speed, add the butter one piece at a time, waiting until it disappears into the dough before adding more.  Mix for 10 minutes, stopping to scrape down the sides as needed, or even using your hands to help incorporate the difficult bits.  It’s important for the butter to be thoroughly mixed into the dough.
Then, turn up the speed to medium and beat for 15 minutes more.  The dough will become sticky, soft, and somewhat shiny.  It looks shaggy at first, and you may wonder if it will ever come together.  But it does.  It just takes some time.  Eventually the dough will become smooth and silky.  Now, turn up the mixer to medium-high and beat for 1 minute.  Test the dough: If you pull at it now, it should stretch a little and have some give.  Add a few tablespoons of flour if it seems wet or loose.  If it breaks off into pieces, continue to mix on medium for another few minutes.
Place the dough in a large bowl and cover with plastic wrap, making sure the wrap directly touches the dough to prevent a skin from developing.  Put the dough into the refrigerator.  Leave it there at least 6 hours, preferably overnight.
For the buns:
First, make the goo.  In a saucepan, melt the butter over medium heat.  Whisk in the brown sugar until it dissolves.  Remove from heat and add the honey, cream, water, and salt.  Let cool.  (This can be stored in an airtight container in the fridge for up to two weeks.)
On a floured surface, roll out the dough into a rectangle about 16 by 12 inches, and a 1/4 inch thick.  Position the rectangle so that the short side is facing you.
In a small bowl, mix together the brown sugar, granulated sugar, cinnamon, and half of the pecans.  Sprinkle the mixture over the entire surface of the dough.  Then, starting from the short side farthest away from you, roll the rectangle into a tight log, like a jelly roll.  Trim 1/4-inch off of each end to make it even. Cut the log into eight even pieces.  (At this point, I kept the unbaked rolls, wrapped in plastic, in the fridge overnight.  It’s also possible to freeze them, and then let them defrost in the fridge overnight, or at room temperature for a few hours before baking.)
To finish:
Pour the goo into a 9x13 inch baking dish.  Sprinkle the remaining pecans over top.  Place the buns in the pan, spread out evenly.  Cover in plastic wrap and let proof in a warm spot for two hours, or until the dough is puffy and soft, and the buns are touching.  (Because I had let the cut buns proof in the fridge overnight, I only had them sit out for a half hour before baking.)
Preheat the oven to 350 degrees Fahrenheit.  Bake on a middle shelf for 35 to 45 minutes, until golden brown.  Let cool on a wire rack for a half hour.  Then, one at a time, take out the buns and invert them onto a serving platter.  Spoon the extra goo sauce over top.  Serve.
Posted by Molly at 7:22 AM

Those look delicious! We made the roasted pear and cranberry crostada last week during the blizzard. It took all day, but was totally worth it. I aim to work my way through the cookbook, doing a recipe a week.

That's an awesome idea, baking through the whole book. Everything sounds delicious. You'll have to let me know which are your favorites! I was actually staring at the picture of that crostada the other day - glad to know it's worth it!

these look absolutely incredible! i'm partial to the pioneer woman's cinnamon buns - but these definitely look like a possible up-ender in the cinnamon bun/sticky bun challenge!

I would like one of these babies right now. Feels like appropriate blizzard food to me. I hope you're staying warm.

where does egg #6 go? Only 5 are incorporated into the dough.

where does egg #6 go? Only 5 are incorporated into the dough.

I have the same question, what happened to the 6th egg?

I have tried several different variations of "goo" and this recipe is by far the best. I did not have any cream so I substituted sweetened condensed milk which made them I believe, even better!!!