I’m in the middle of an overwhelming writing project. It consumes my days, and some of my nights. I spend a lot of time at my desk. I'm sitting there now. Through the window, I can see a big, gnarly oak tree. It’s leaning to the left, stretching to touch its very last branch to the roof of the house below. Over the past two weeks I’ve watched the red leaves fall, one by one, and now it’s bare.

The excitement of this past week has been surreal, especially when experienced against long hours of concentration and Word documents, watching autumn slowly melt away.

But it has been exciting. I sold some freelance work and found a yoga studio near my house. I baked Edna Lewis’ Fresh Apple Cake with Caramel Glaze, and under-seasoned a mediocre pot of cauliflower soup. My car got a flat tire. I avoided fixing it for as long as possible. And, of course, Obama is President-Elect.

I cooked dinner for my family last night. It was a calm Sunday evening to prepare for another week—a calmer week, but one still laced with hope and change. My favorite part of the meal was the Julia Child’s Alsatian Onion Tart.

Now, I took a short cut. I admit it. I used frozen puff pastry rather than the "from scratch" Julia would have wanted. But I have no regrets. The sweet onions melted against its flaky crust just right. 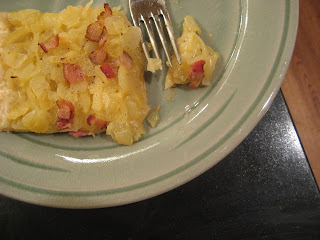 -Roll out the puff pastry until very thin on a lightly floured surface. Julia recommends cutting it into a circle using the lid of a pot as a guide. I left it as a rectangle. Place it on an un-greased baking sheet, and prick dough all over with a fork. Refrigerate until needed.

-Put diced onion and chicken broth into a saucepan and cook over medium heat for around a half hour, until onions are soft. Drain, discarding liquid, and let cool. When cool, add heavy cream, season with salt and pepper, and stir.

-Cut bacon into 1/4 inch cubes. Blanch for one minute in boiling water. Drain and rinse with cold water. Pat dry with paper towels. Then, heat a medium skillet over moderately high heat, and cook the bacon pieces for a few minutes, making sure they don't get too tough. Remove from heat, and drain on paper towels again.

-Preheat oven to 350 F. Remove pastry and top with the onions, spreading all the way to the edge. Scatter bacon over top. Bake for about 30 minutes, or until golden brown. (I cooked mine for closer to 45.)
Posted by Molly at 1:59 PM

Your blog is super. So are your photographies. They make me hungry. I have spent a nice moment when seeing them. Thanks a lot.

Hello -
I am a filmmaker in Atlanta. I read your blog with the mention of Edna Lewis and her recipes.

I just wanted to let you know I produced a 21 minute documentary about Miss Edna Lewis and its viewable in its entirety on Internet at a Gourmet Magazine website:

My documentary is called Fried Chicken and Sweet Potato Pie.

My website, http://bbarash.com/bb_friedchicken.htm has more information about the film and the story of Miss Lewis.