Sometimes the slow moments sneak up on me.

I had been spending my days working away, lost in reams of Word documents and stacks of library books, feeling little but the adrenaline of deadline and excitement of production. But then, suddenly, the articles were filed. The revisions were made. The endpoint never ceases to surprise me.

I woke up on Sunday morning with nothing more pressing than the newspaper, wrapped in plastic and the damp red leaves that had fallen from trees the night before. I’m really not used to free time. I baked a cake to take off the edge.

I have been transfixed by Suzanne Goin’s cookbook: Sunday Suppers at Lucques. Her “pumpkin” cake—understated and sweet, made with roasted butternut squash and a whiff of honey—transformed the house with scents of pecans and butter. It spoke to late autumn, early dusk, and lazy afternoons in the kitchen. 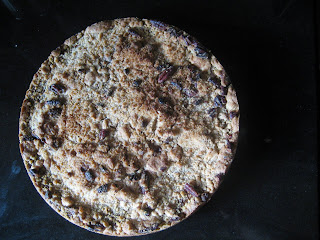 Cut the squash in half lengthwise and place on a baking sheet, cut side up. (Don't remove the seeds yet; they give extra flavor.) Cover with foil, and roast about 1 hour, until very tender. Let cool 10 minutes, and then scoop out the seeds and discard them. Puree the warm squash through a ricer or food mill and measure out 1 1/2 cups.

Butter and flour a 10-inch pan (I used a springform)

Place the butter in a medium saucepan. Slice the vanilla bean in two and scrape out the seeds with your knife into the pan. Add the seed pod as well, and cook over medium heat 6 to 8 minutes, shaking the pan occasionally, until the butter browns and smells nutty. Remove the pod.

Sift together the flour, baking soda, baking powder, sugar, cloves, cinnamon, and nutmeg into a large bowl. Add the salt. Make a well in the center.

In another large bowl, whisk the reserved 1 1/2 cups squash puree, milk, 1/4 cup cream, eggs, and honey to combine. Pour the liquid into the well in the dry ingredients, and whisk until incorporated. Stir in the brown butter.

Pour the batter into the prepared pan and bake 25 minutes, then remove the cake from the oven and sprinkle the streusel evenly over the top. Bake the cake another 45 minutes (or longer--mine was in for an hour), until the topping is crisp and cake has set. (The center of the cake will still be somewhat soft and won't pass the toothpick test.) Cool the cake on a rack for at least 15 minutes.

**Update: Originally, I had listed the quantity of heavy cream needed as 1 and 1/4 cups. The cake recipe calls for 1/4 cup, with the additional cup meant to be whipped and served along side the cake. I didn't make the whipped cream myself, and neglected to remove the measurement from the recipe when I wrote it up here. My apologies for the confusion!

Spread the pecans on a baking sheet, and toast them 8 to 10 minutes, until they darken slightly and smell nutty. When the nuts have cooled, chop them coarsely. Toss the nuts with the oil and salt.

In a food processor, pulse the butter, sugars, flour, cinnamon, and nutmeg until just combined. Remove to a bowl, stir in the salted pecans, and chill until ready to use.

This sounds so good! I'm bookmarking it.

Thanks, Maggie. It won't disappoint!

This was very frustrating. A lot of work to realize at the very last step that the cream as listed in the ingredients was 5 times what was called for in the recipe. I hald already added it in... and the result was a disaster. What a waste pf three hours.

My apologies for the confusion. That extra cup of cream in the original recipe was meant to be whipped and served alongside, while only a 1/4 is listed in the actual cake recipe. I've added an update and correction to the recipe above. Thanks for bringing it to my attention!

You know I make this recipe wrong every time (the cream issue is in the book as well) and everyone LOVES it that way. Just FYI!!