I spent a lot of time reading in the months after I was hit by a car. It began slowly; as a result of my skull fracture it was weeks before I could fully focus my eyes. But once I repossessed control of my mind and my sight, I camped out in a makeshift bed in my mother’s living room—my knee encased in bandages and a hefty metal brace, broken pelvis aching, wobbly crutches nearby—and surrounded myself with books.

It was a time rife with solitude. The days were long, with my mom at work and my friends scattered around the world. I was largely alone; it was easy to imagine that no one had ever felt so shattered.

I read Joan Didion’s The Year of Magical Thinking straight through in one rust-colored afternoon. She wrote it in the year after her husband’s sudden death, while their only child was severely ill. It is a narrative of her grief, written in language simple yet utterly evocative. Her “magical thinking” came in the vice of believing her dead husband would return, just as I—lying there with a long noxious bruise running down the side of my face and neck, monotone nothingness where my sense of smell once was— believed that my life would be the same once I could move again. As I read, I didn’t feel so alone.

Those months of recovery feel like a very long time ago looking back, though it was only a year and a half. Now, amid the oft-overwhelming clutter and crowd, the fast-paced movement of my life in New York, solitude is something I miss. I’ve never been good at finding the median.

But when I saw that Joan Didion had turned her book into a play, with Vanessa Redgrave playing the author, I immediately bought myself a ticket. I took myself alone on a Monday night after work.

It is a one-woman production: Vanessa Redgrave sits majestically in a wooden chair alone on stage for an hour and a half monologue. Her voice is rich, melodious. Her white hair pulled simply back from a chiseled face. She embodies the language of Joan Didion perfectly. I sat in the back corner of the dark theater, and found myself struck with memories of when I first read the book, in that time surrounding the accident. Things I hadn’t thought of in a long time.

At one point, Didion/Redgrave speaks of being with her very-sick daughter in the hospital. She wanted nothing more than to take her back to the hotel, to sit by the pool and get manicures together, to have her daughter’s hair washed in the salon. Then, at least, she would be doing something concrete to take care of her.

I suddenly remembered my own mother, who, soon after I returned from the hospital last year, brought me to the salon to have my hair washed. My body ached as they rinsed last vestiges of the accident off my skull. It hurt my broken pelvis to sit in their hard plastic chairs. I didn’t want to tell my mom, though; she was taking care of me.

When I left the theater that night I was immediately surrounded by the neon lights and the raucous throngs of people in Times Square – the night air felt stale and my shoes were cutting into my heels. But despite that, I took a deep breath and felt, for the first time in a while, that I had given myself the time and space to process what was going on around me, undistracted by people or work.

It is easy to get caught up in the ferocious movement of New York City. But ever since seeing the play I have been actively trying to give myself more space.

And this is my meandering transition to the culinary. As part of my “more time to think” campaign, I have been on a serious bread-baking bender.

There is no hurrying bread. Baking forces me to slow down; I take my time in the kitchen. On Saturday mornings, when I haul out my Kitchenaid mixer, my apartment is filled with light. The yeast bubbles softly in warm water before I add flour. The dough goes from sticky to supple as I knead it on my counter. My mixer is bright red and my apron has three little buttons the same shade of brown as the rising dough. The oven is warm and the tea kettle leaves a faint mark of steam on the nearby window. The corners of the bread pan are perfectly pointed. I let my mind wander.

And as the bread bakes my apartment is filled with a nutty, sweet perfume. It is a scent that my ravaged olfactory neuron can now detect—perhaps not in its entirety, but enough to feel its coziness.

Peter Berley’s recipe for a plain, white loaf was my most recent success. 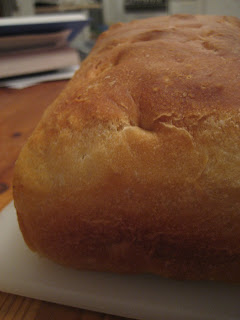 1. In a large bowl, combine yeast, water, and sugar. Stir to blend and let stand until foamy, about 5 minutes. Stir in oil and salt.
2. Add all of the whole-wheat flour and enough of the white flour to form a ragged mass of dough. Scoop out onto a clean, lightly floured surface. Wash out the bowl and clean and dry your hands.
3. Knead for 10 minutes, until smooth and elastic
4. Lightly coat the inside of the bowl with oil. Turn the dough over several times in the bowl and cover tightly with plastic wrap
5. Refrigerate the dough for at least 12, up to 48 hours
6. Remove the dough and let come to room temperature, about two hours
7. To shape the dough, gently press into 1-inch-thick circle. Fold down the top third and up the bottom third, pressing the seam together with fingers. Place in a lightly greased bread pan seam side down. Cover with damp towel. Let sit one hour, until has risen a bit more.
8. Uncover and brush with oil or a bit of melted butter.
9. Bake for 45 minutes at 400 degrees. When it comes out, a thermometer stuck to its center should read 200.
10. Let cool before slicing
Posted by Molly at 7:09 AM

You really paint an incredible picture with words! I hope all your recovery time really helped get you back on your feet in good shape! And I hope the sense of smell improves. (Have you tried acupuncture?) I've been wanting to read the Year of Magical Thinking for a while, but now I Really want to read it...and bake bread! Thank you for your writing!

Another beautiful, beautiful post, Molly. When I'm in New York and seeking a little solitude--and not just the weird emptiness of midtown on a Sunday afternoon, which is more about loneliness than solitude--I take the A train up to Fort Tryon Park and the Cloisters. The park is so green and peaceful that I don't even feel like I'm in Manhattan. There are great views of the Hudson River too. And the Cloisters have a wonderful dark, hushed quality that is absolutely renewing.

Molly, I too, loved this book, though I read it without any accompanying loss. I find Wally Lamb's books perfectly capture the sense of bewilderment, loss, denial, and self realization in a human and humane way.

I'm glad your bread is making you happy, too.

love these posts about bread...they inspire me to get out my loaf pan and get baking! Bread always seems very overwhelming to make but your recipes seem do-able. I just posted a link on my blog (Urban Forager)to your site as I've found your insights about the food world to be very intersting and inspiring. Thank you for sharing your food journey!
(www.jennifermeier.blogspot.com)

Thanks for your comments! (and sorry it's taken me so long to reply...)

Esther - I haven't tried acupuncture, but my aunt swears by it, and so it has been floating around in my mind as something to try.

Terry B - I've actually never been to Fort Tryon Park and the Cloisters, but have been wanting to go. Now that the weather is beginning to look a bit more spring-like, I will have to go.

Bipolarlawyercook - Yes, "She's Come Undone" is one of my Wally Lamb favorites.

J. Meier - The bread is surprisingly easy, once you get in the mindset and over the time it takes. Thanks for the link!

oh, what a story-keep on baking and slowing down.Thanks for a great post today-

I saw Lynn Redgrave do a one woman play several years ago. She was incredible...with all the seemingly raw emotion in the performace. Amazing.

I've followed your healing process since the accident first happened. It's made me acutely aware of smell and the sense I easily took for granted.

Molly,
Just wanted to let you know I absolutely love your blog. I came upon it a few months ago. I was injured in an automobile accident where I also lost my sense of smell) a little over a year ago and was looking online to see if others felt emotional on the one-year anniversary of such an event. Your posting on that topic was so reassuring and moving. ... I also love to cook and love Joan Didion, so have been following your blog posts religiously. I think you are amazing! Thanks for writing this blog!