I was on my way to Ann Arbor to visit Becca for the weekend. My flight, however, was delayed for three hours due to the confusion of an “illegal flight attendant.” There was a cacophony of screaming babies, constant robotic announcements on the loudspeaker, and a middle-aged woman wearing a pink velvet track suit—obviously drunk—wandering back and forth in front of me, slurred and muddled and trying to find men with whom to flirt. My time spent waiting, curled up in a hard plastic chair near the window, didn’t bother me though. (Shocking, I know, as I tend towards grumpiness). But I was too lost in my book.

Nigel Slater writes about his childhood in poignant, culinary-centric vignettes. His language is simple yet descriptive, his voice captivating. It is, after all, the narrative behind food that I am most interested in.

On the first page he writes: It is impossible not to love someone who makes toast for you.

And sitting by the gate—a mug of airport-style tea (weak) and packet of Skittles (hate the purple ones) by my side—I thought about toast. My mom used to make it for me when I got home from school slathered in butter with a sprinkling of cinnamon and sugar on top. I loved its warm crunch. I had forgotten about that.

With the topic of childhood food I am often bogged down with unctuous memories of take-out Chinese, Dominos pizza, and frozen TV-dinners. But reading Mr. Slater’s lyrical book reminded me of the other moments. And as I waited for my flight, actively avoiding eye contact with pink-velvet drunk lady and moving the pages of Toast at a rapid clip, I kept my little moleskin notebook flapped open on my lap and found myself taking notes on childhood food.

My mom made a killer meatloaf. I always watched her in awe as her bare hands squished the gurgling raw meat mixture together in a big metal bowl before molding it into a log to bake. It was topped with a red river of Heinz ketchup.

I loved the plop of bread hitting the cinnamon-speckled egg mixture while she prepared French toast; my preschool teachers used to say that every day I came to school smelling of maple syrup.

Her strawberry rhubarb pie was bronzed and crusty, the deep red innards succulent. And the huge, chocolate-pecan “whopper” cookies—still made every year without fail—are to this day lengthy topics of conversation among my high school friends, especially around Christmas time.

The best, however, was onion soup. Every year, smack in the dead of the New England winter, mom would break out the special ‘onion soup bowls’—ceramic with squat little handles and the deep hue of chocolate. And the soup: slow cooked and filled with the earthy, brothy brown of caramelized onion, topped with French bread and oozing broiled cheese. The scent of onion soup signaled school’s winter vacation, sleds skidding down the hill of my backyard, my dad building fires in the fireplace, puffy jackets and itchy hats, icy wind on my face as I went skiing with my little brother. I had forgotten about that soup; I wonder where those bowls are now.

When I was a sophomore in high school my parents divorced and there was not much onion soup – or much cooking of any kind, for that matter – afterwards. How fitting then, I thought with a smile as the nasally voice of the flight attendant suddenly began to prepare us for boarding, that while I was visiting home for Presidents Day Weekend my mom and I made onion soup. With a recipe from Nigel Slater’s own cookbook, The Kitchen Diaries, even.

The soup was easy to make, nothing like my mom’s classic and lengthy previous undertakings. But after a long walk in Boston’s bitter cold (the wind had cut through my hat; even my hair felt numb) it was perfect. We cooked together in her cozy, warmly lit kitchen. And as I sliced the crusty baguette for the topping, I could smell the earthy sizzle of the onions roasting in the oven. I could smell the rich salt of the butter melting in the pan and the nutty gruyere I grated on the counter. There isn’t much I can’t smell, at least a little bit, these days. And this soup carried a definitive scent of school vacation.

By the time I actually boarded the plane in LaGuardia that Friday I was exhausted. I fell into a mottled sleep as soon as I sat down and didn’t fully wake up until I arrived in Detroit in the early hours of Saturday morning. The intoxicated lady in pink velvet was tired as well. I know this because the gods of air travel seated her right next to me. She, too, slept the entire flight. Often with her head lolling about on my shoulder. 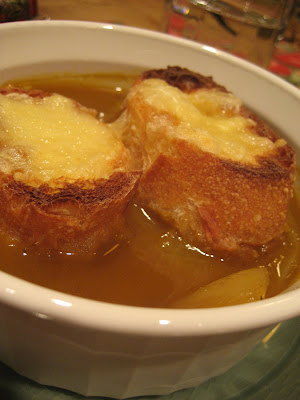 Preheat the oven to 400F. Peel the onions and then cut them in half from tip to root; lay them in a roasting pan and add the butter, salt and some pepper. Roast until soft and tender, with some dark spots. Cut them into thick segments and put into a saucepan with wine and bring to a boil. Let the wine bubble until almost gone and then add the stock. Simmer for 20 minutes. Just before serving, cut the bread into slices and toast lightly on one side under the broiler. Remove and top with grated cheese. Ladle soup into bowls and then float the crouton on top. Place bowls under the broiler until the cheese melts. Eat immediately.
Posted by Molly at 12:01 PM

Oh, Molly you get it!

So glad my husband makes toast for me.

My mom makes French Onion Soup even though she loathes onions. I just read your post about eggs and had to laugh a lot because my husband and best friend were in the Peace Corps in Africa and we constantly refer to "Our time in Africa" (though I wasn't there) - strangely I can't abide eggs either.

The soup memories are magical, but it was the "illegal flight attendant" that caught my attention. I recently caught a connection in Chicago, that I mercifully made by about 2 minutes. My inbound flight had been delayed, and apparently so had that plane - because of some kind of trouble with a flight attendant (in Texas, their inbound leg). I didn't quite catch everything the pilot said, but something was said that made me imagine the F.A. getting arrested. Maybe "illegal flight attendant" is the new generic excuse??

Another wonderful story, Molly. My own childhood memory of onion soup is less pleasant, I fear. When I was eleven, I took my seven-year-old brother on a 600-mile train trip sans adults, going from one relative to another for a summer visit. These days, it wouldn't be allowed--back then, it probably wasn't all that advisable.

When we went to the dining car for dinner, my 11-year-old self was so appalled by the prices that, even though I'd been given plenty of money for food, I would only order the soup of the day for us. It turned out to be onion soup. We ate all the bread they brought us and barely touched the soup.

Reading your recipe now, though, I'm ready to give it another try.

One of the favorite lines in one of my favorite books involves the heroine, who's starting a new life in a foreign land-- she loves it, but muses to herself-- "one of these days, I have got to teach them about proper toast."

Mimi - Thanks! Toast certainly is a comfort...

Elle - I can only imagine being close to two people spending intense time in Africa would make it feel like your time as well... odd about the anti-egg feelings too!

Anonymous - Who knows about this whole 'illegal' flight attendant thing. some people tell me it is because the attendant had already worked too long for one day. I like to think that they just suddenly discovered, very Men-in-Black-style, that s/he hailed from another planet, the Northwest uniform covering green scaly skin and a few extra eyes.

Terry - Maybe it's time to give onion soup another whirl!

BPL - Yes, the crocks are a must. What book? It sounds lovely.

I read this this morning, and could think of nothing all day except how much I wanted some really good, buttery, hot toast!
Yummm!

nigel is wonderful. toast is a lovely book. my british husband was practically weeping over his memories when he read it.

he ahs a book out now called kitchen diaries, which i think you'd like.

Molly (I love that name- it's my youngest daughter's name),
So many onion soups call for red wine, but I have mae mine with white for years (after trying red since it seemed so logical) and it is the best! Thanks for sharing this recipe.