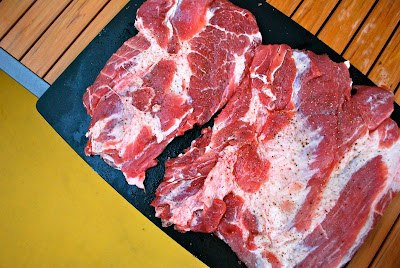 A few weeks ago in Maine I cooked the hell out of some pork butt.

That’s right. Pork butt. And peaches. On the grill. In less than an hour. If summer has to end, we might as well send it off in style.

In Cambridge, I live in a studio apartment. There’s no fire escape or roof access. There certainly isn’t a grill. But at my family’s place Maine? There are multiple rooms in the house. There’s even a yard. And a deck. And a grill. A big fat gas grill. The possibilities are endless. 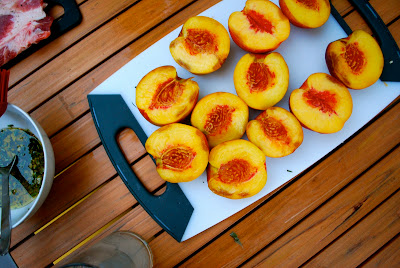 For this dish, a perfect late-summer dish (though I know I’m now pushing this dangerously close to fall), I used a recipe from the New York Times. It accompanied an article called “How To Burn Dinner,” written by Sam Sifton, who really has this uncanny ability to turn a hunk of tough, fatty meat into something quiet poetic. 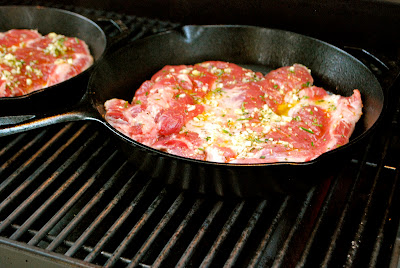 It’s all about a technique championed by Francis Mallmann in his cookbook (written with Peter Kaminsky) “Seven Fires: Grilling the Argentinean Way”– cooking a piece of meat outdoors over high heat, on a chapa, or a leggy cast-iron construction, to create a thick, crunchy crust. “If Mallmann’s cooking were music, it would be very loud,” writes Sifton.

It was easy. I took a 2-pound piece of pork butt. Butterflied it. Trimmed it. Pounded it down. I liberally seasoned the meat with salt and pepper. I slathered it with a mixture of olive oil, rosemary, and garlic. I heated up the grill with two cast iron pans on the grates. 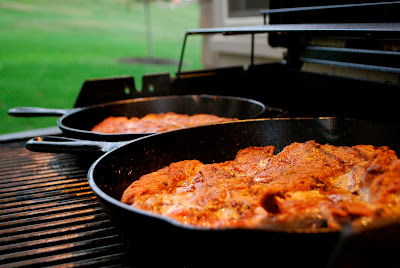 When they got hot, super hot, smoking hot, I plunked the pork right on down and didn’t move it for 15 minutes. Oh, man: that crust! I then flipped the pork and let it cook for a good 15 minutes more. The high heat of the grill causes something called the Maillard reaction, a chemical reaction between denatured proteins and sugars, which begins to take place at just about 300 degrees. This is what causes the familiar deep brown color on searing meats (and, for that matter, toasted bread and caramel) and a build up of flavor molecules—in this case, that pungent porcine deliciousness of a thick, bronzed crust.

After the pork came off the grill to rest, I stuck halved peaches, cut-side down, into the hot cast iron pans. They cooked quickly in the pork fat (and a little bit of butter, too). They were a sweet, silky counterpoint to the crunchy, lusciously fatty meat.

I served the pork and peaches alongside a simple green salad. Bread. Red wine. Oysters, too. (Why not? Welcome to Maine.) (Goodbye to summer.) 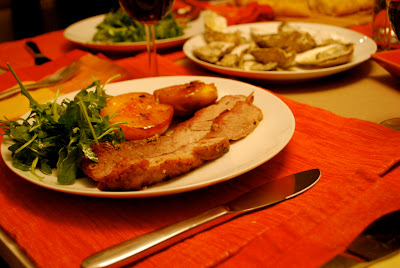 Grilled Pork and Peaches on a Gas Grill
Adapted from the New York Times, Sam Sifton, and Francis Mallmann

Turn on your grill. Set it to high. Place a very large cast iron pan (or two smaller ones) over the burners. Let it get hot. Very hot.

While the grill heats, work on the pork. Place the butterflied pork on a cutting board and pound it with a meat mallet until it’s evenly thick—about ¾ inch across.

Mix together the garlic, rosemary, and 6 tablespoons of the oil in a small bowl. Season the pork (liberally, “aggressively,” says Sifton) with salt and pepper on both sides. Spread the garlic mixture on both sides as well. Because I used two smaller cast iron pans on the grill, I cut my pork in half, so that I could cook each piece simultaneously.

Back to the grill. Turn the heat to medium. Brush the pan (or pans) with the remaining oil. Let the oil heat up for a minute, and then place the meat in the pan(s) and leave it alone. Don’t touch it. This is what will get it that crust, that char, that flavor. I let my pork sit for 15 minutes. Sifton says 10. It depends on how hot your grill is, how thick your pans and pork are. It’s important to do what feels right here. Wait until that crust forms.

Use tongs to turn over the meat (or pieces of meat). Cook for another good 10 – 15 minutes. When the meat is nice and crusty, remove it, place it on a cutting board, tent it with foil, and let it rest.

Now, take the halved peaches and place them, cut side down, in the cast iron pan(s). Dot them with butter. Cook for about five minutes, until soft and slightly charred.

Slice the meat and serve with the peaches. And salad. And bread. And wine. (And oysters.) 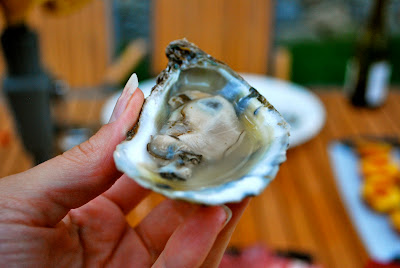 Labels: sometimes there is nothing better than cooking the hell out of some pork butt, then eating it with peaches

I love using my cast iron on the grill. It makes things simple, clean up easy, and I swear it tastes better.

What a fine way to send off summer! But I refuse to believe it's nearing the end. I'll live in denial for the next couple of weeks if I can.

Man, I want to make this! Especially cooking the peaches in pork fat... genius.

Sam: Yes! It is so much simpler with the cast iron on the grill. We've got a good couple weeks before the end of summer is undeniable, so you're still in the clear.

Oh man ... I don't even eat meat but that sounds sooo good!

I mouth is watering man. I am not a great cook but of course i will try this out one day. My hubby love meet like anything