Pie in the Times 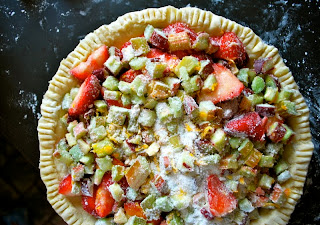 Seven (7!) pies. That’s a lot of pie for a household of just two (2!). As a result, for a while there I was eating pie for breakfast, and then again after lunch. I gave away thick slices to family and friends, wrapping them tightly in plastic, ferrying them away on china plates. One night, even, Matt and I ate pie and only pie for dinner. Well, no. There was ice cream, too. But, still, that’s a lot of pie. Why? Well, let’s backtrack a minute: 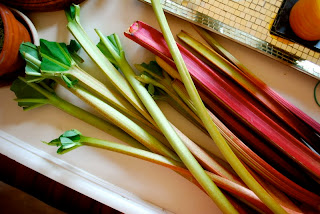 When I was small, my mother baked strawberry rhubarb (or often just rhubarb) pies. She used a recipe from her mother, Marian, who had written it neatly in cursive on an index card now yellowed with age. I wrote about this pie in my book. And I’ve written about it here before, too. For that blog post, I played with the recipe a bit. I substituted my butter-and-shortening piecrust for my grandmother’s all-butter one. I reduced the amount of sugar in the filling, because I found the original overly sweet. But despite these changes, the pie was not my own. Not really. It was still my grandmother’s, and my mother’s, fitting snug in with the memories of my childhood.
When Pete Wells, the editor of the New York Times Dining Section, asked me to develop a recipe to run with this article about Season to Taste, one that pulled at the themes of the book, I immediately thought of that pie. After all, this particular pie deals in emotion and memory, smell and taste and flavor, baking and home. Not to mention the fact that strawberries and rhubarb are in season. Done! 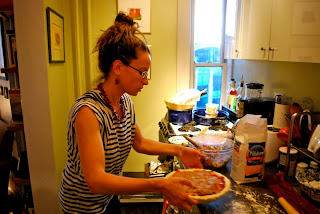 (But, wait. Can we pause for a second here? An article about Season to Taste in the New York Times?!? Pete Wells asking ME to develop a recipe?!? Excuse me while I go do a little dance. Or, alternatively, take a long nap. Getting my head around this fact is exhausting.)
But for this article, I wanted to make the pie my own. To spice it up. And to do this, and do it well, I had to experiment. I had to test some different things out. And so I did. Seven times. In thirty six hours. Deadline baking! It was fun. 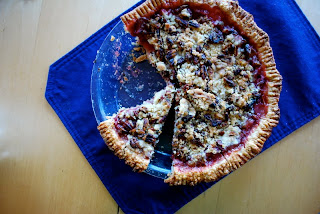 In the end, I made a streusel topping, rich with butter and crunchy with pecans, and added orange zest to the filling. I used three kinds of ginger: candied and a bit of powdered in the topping, and grated two tablespoons from a knob of fresh ginger in the crust. It’s crunchy and smooth, sweet and tart with a little bit of spice. I didn't end up taking any pictures of the final version, only the numerous iterations in between. Though you can find the finished recipe here.
I know that I’m biased, but this pie? Even though I’ve eaten more pie in the last couple weeks that I have in the last few years combined, and sometimes wonder if I’ll ever want to again, I think it’s great. 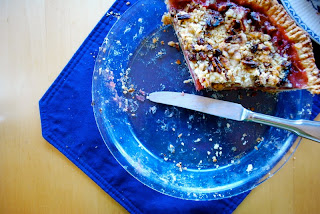 An article in the New York Times! I am so excited for you, and I cannot wait until I have your book in my hands.

excellent, it's exciting to see your work emerge in the wider world.

Hi Molly,
I read the NY Times article about your book. I am looking forward to reading your book.

Hi, I read about you in a brazilian blog, http://colunas.epoca.globo.com/mulher7por7/2011/06/16/a-historia-de-uma-chef-que-perdeu-o-olfato/. I really like to cook and I'm wodering how is you experience after the accident. I wish keep reading you blog and maybe take some recepie! Congratualations for your determination and strength. Now, here, at another side of America, someone is hoping that everything could be ok with you. =)And sorry if I wrote something wrong =)

Payal, I hope you enjoy it!

Rgomes, so glad you stopped by. :)

so exciting - hoping it's released over here in the UK at the same time!