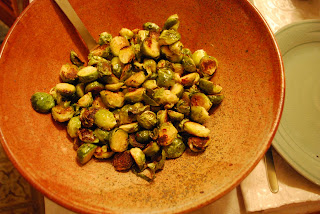 We’ve been busy around here. Last week was especially intense. This is nothing to complain about, of course. The nasty winter weather decided to loosen its vice-like grip and, suddenly, my calendar filled up with panels, lectures, happy hours, and dinners with friends. It was a somewhat exhausting week, but also totally great. I mean, what isn’t great when the morning light is already streaming through the windows when I wake up, and it’s again possible to run outside? Goodbye, winter. Hello, spring.
Here are a few bits and pieces of my week spent barely at home: I spoke on a panel about science writing at Brown and listened to a lecture on education, the military, and what it means to serve. I ate gummy bears at an Oscars viewing party and drank vodka and soda at a noisy, dark little bar. There was a dinner of burrata and wild boar ragu at a table filled with new friends, and a meal of butternut squash soup and salad shared with a woman I’ve known for 26 years. Last night we met my mother and her boyfriend at The Beehive, a funky restaurant in the South End, for flatbread with brie, salmon with kale, a pretty awesome lemon cheesecake and, of course, a bit too much wine.
And now, on this gloomy Monday morning, I’m sitting at my computer in the kitchen with a mug of coffee and a ripe Bartlett pear. I’m looking forward to a day of writing. I’m looking forward to tonight when I will cook. Because it’s been a while since I spent some time at the stove. And I miss it.
Now, I love to eat at restaurants. I love good service and interesting wine. There’s little better than a well-wrought plate of food, exciting with new flavors and textures, a meal that I would never have at home. But I like eating out to be special. I don’t ever want it to get old.
I read a few lines in Nigel Slater’s The Kitchen Diaries last night before bed. In his March 12th entry, Slater writes about a week in which he ate out more often than not and barely had time to cook:
“Eating out remains an absolute treat for me; especially so this year, when for one reason or another I have spent so much time at home. Even if I could eat out every night, I wouldn’t. Although I will admit to occasionally getting a bit ‘cooked out’, I cannot pretend I don’t enjoy putting something I have made for someone on the table. To this day, it still sends tingles down my spine.”
Me too.
Tonight I’m going to cook a very simple meal. It will just be Matt and me at the table. We’ll probably talk about boring, everyday things—his schoolwork, our taxes, and renewing the lease on my car. I’ll cook a pan of meatballs, ones made with ground beef, bread crumbs, parmesan, and basil. I’ll probably serve them over a thick puddle of polenta. I’ll make a big bowl of Brussels sprouts, roasted with olive oil, salt, and pepper. I'm not sure that my spine will actually tingle. But it will be close. 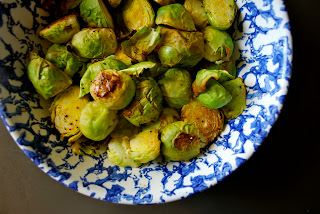 Roasted Brussels Sprouts
This isn’t really a recipe. It’s a super simple technique for a dish that I’ve made hundreds of times in the past. I know that there are a lot of Brussels sprout haters out there. But if done well, they can be soft yet crunchy, salty and sweet, as addictive as candy. And if you only knew the number of times members of my family—including my little brother, who rarely cooks—have texted me to ask for this recipe, you would have to believe that these little green orbs can be turned into something quite special.
Brussels Sprouts
Olive Oil
Salt and Pepper
Preheat the oven to 425. Trim the bottom end of each sprout, and then cut them in half. Place the sprouts in a thick roasting pan, making sure to include the extra leaves, which will grow dark and crispy in the oven. Drizzle with olive oil to coat. Sprinkle generously with salt and pepper. (I like mine to be very salty, like French Fries.) Roast for 20 – 30 minutes, until the sprouts are cooked through with patches of deep golden bronze. Enjoy!
Posted by Molly at 12:35 PM

Late Friday night I found myself snuggled on the couch reading Nigel Slater's "Appetite." I love his whole approach and mentality towards food.

I've been on the fence about whether the second week in March was too late in the season for a bowl of Brussels sprouts, and I'm pleased to find out that it isn't! :-)

Molly, in my opinion it's never too late for Brussels sprouts. xo

Oh, I love Brussels sprouts and have roasted them before but not cut them in half! Seems like a small distinction, but I can see how it would make a delicious difference.

Thanks for the reminder.

Josephine - I always cut the sprouts in half before I roast. It gives them a bit more crunch.