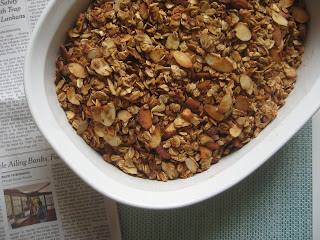 I work best in the pre-dawn, my dark studio lit only by the computer screen. I love the chilly moments before the sun comes up, before I begin to hear the clank and clatter of the rest of my building starting the day. I like to type with the radio on in the background, so low as to be almost inaudible. I like to move slowly, pausing to read the paper with a mug of coffee steaming on my desk nearby.

None of this is nice, however, when I’m hungry. My mind just doesn’t work without breakfast. As Lewis Carroll said so eloquently in Through the Looking Glass: “Why, sometimes I’ve believed as many as six impossible things before breakfast.”

For me, breakfast is usually oatmeal, served with a dollop of milk and some combination of berries, apple slices or nuts. Sometimes it’s a bowl of cold cereal and yogurt. There is toast with butter and jam on occasion, oranges often, and always a piece of chocolate or two.

I made my first batch of granola this afternoon. It filled my apartment with the scent of brown sugar and cinnamon, ginger and almonds. Tomorrow morning I’ll eat it with milk and a sliced banana. Though I will admit: it’s pretty nice as a late afternoon snack. 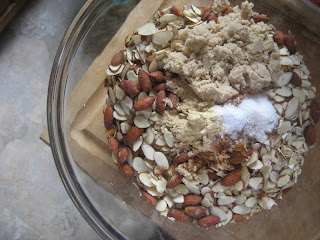 I adapted this recipe from Orangette, which is a blog (and now book) that I often turn to for trusted recipes ranging from chocolate madeleines to chickpea salads. I changed some things here due to taste preference: cutting down on both sugar and the amount of nuts and seeds. I changed some things due to convenience: a lack of brown rice syrup resulted in a lovely swath of honey.

Wet Ingredients:
a heaping ¾ cup unsweetened applesauce
1/3 cup honey (I used raw wildflower honey, which I had picked up when in Tennessee.)
2 Tbsp canola oil

Spread mixture out on two rimmed baking sheets, and bake for 35 – 40 minutes on two racks set on the top and bottom third of the oven. Turn around the pans and stir every 10 minutes or so. When done, the granola should be a toasty golden brown. Take the pans out of the oven and let cool. It will still be a bit soft upon its exit, but crunches up while losing heat.

Store in sealed containers, or a plastic bag, as long as you like.

regard from Reus Catalonia Spain
thank you

I just made some granola myself this week...it's delicious but turned out more like dessert than healthy breakfast food...i'll try using the applesauce and less oil and sugar next time and see how it works.

I adore that you eat a bit of chocolate as part of your breakfast. Must make each day a little sweeter. ;)

Also, many congrats on your book! Your blog is a delight to read.