Ottolenghi's Soba with Mango and Eggplant

I spent a good part of this week trying to write a post about dating. Because, hey! I’ve been dating! Slowly. Cautiously. But dating all the same.

The first date I went on in five years took place about two months ago. It was a Thursday afternoon. A perfect summer afternoon. We met at a bar in Cambridge after work.

And this guy was nice. He was smart. We sat at the bar and ordered drinks and talked about work, family, and our favorite restaurants in Boston. But he looked only a little like he did in his dating profile. (Yup, folks, I’m online dating! Why the hell not.) And though everything he wrote in his profile was true, a writing voice is far from a talking voice. The stories we tell to sell ourselves and the stories that exist deep within us are two very different things. Anyway: There wasn’t a spark.

But I’ve continued to date. I like dating. I like meeting new people. Different people. People who intrigue me. People who make me laugh. People who challenge me to look at myself differently. People who look at the world through a different lens. Of course not all of my dates have been stellar. There have been some real doozies. But I love the possibility, the magic of a spark, that split-second knowing: this could be something.

That was the year I wrote my book. The year Matt was deployed to Afghanistan. One of many years I lived in the hectic jumble of buildings and concrete called New York City. That fall I spent a month in a cabin in Woodstock, New York. I was there as part of a writers’ residency, a community of creative folk trying to be simultaneously alone and together. I was 26 years old.

I remember how dark it got at night in Woodstock, up there in the middle of the woods. The woods where bears trundled. And owls hooted. And ghosts of all kinds lurked. When I went outside at night, looking up at those impossible shimmers of starlight, it was easy to believe that the sounds of rustling leaves were whispers, that the moon had a voice, that there was a lot of life to be lived under the cover of darkness.

On one of my last nights at the residency there was a party. Local community members attended. Some of us read our work out loud. It was the first time I did a reading, in fact. I remember that as I stood in front of the crowd, grasping a few pages of my words, my hands shook. I had to take a few deep breaths in order to calm down. But then I read. And when I finished, I could barely hear the applause under the thunderous tone of my relief.

Afterward, as we all sat around drinking wine, one guest announced that she was a palm reader. She was an older woman with gray hair, deep wrinkles, and a voice like gravel. She took our palms in her hands, one after another, tracing the delicate lines of our skin with her fingers. I don’t remember what she told anyone else. But I’ll never forget what she said to me.

“Around the age of thirty,” she said, “something big will happen. It’s something that will cause you to struggle. It will change the way you look at life.”

I nodded. That seemed like a lot to get out of a palm.

“Are you sure you don’t mean around age 20?” I asked. I told her about the car accident that cost me my sense of smell and had almost cost me my life. I was 22 years old. “That was something that caused a hell of a lot of struggle. It certainly changed everything.”

“No,” she said, simply. This struggle was still to come.

I didn’t think that this gravel-voiced woman could tell the future from my palm. Not really. But I thought about her words a lot after that night. I worried that she was right.

Sure we all struggle, at least a bit, in our daily lives. But the struggle she spoke of felt large. And it grew larger in my mind with each passing day. I've already had that kind of struggle, I thought, despite the fact that I know struggle isn't the chicken pox; you can get it again. Recovering from my injuries after being hit by that car had felt like one Herculean effort after another, moving slowly from broken back to whole, discarding painful skins of my former self along the way. And when I emerged on the other side, I felt inhumanly lucky. Could I do it again? I wasn't sure.

But then, this winter, I again faced something terrifying and large. A different kind of terrifying. A different kind of large. As I wrote back in April "When Matt and I split, I felt like I was ripping my arm out of the shoulder socket, or cutting my leg off at the knee, or tearing a pattern of tiny holes in my gut, or all of that, or maybe none of that, but nonetheless it was substantial and consuming and physical all at the same time." For a while, I felt like I would never be okay. Maybe you were right, palm lady: I am 29 years old.

But I got through it. I’m sitting here at my kitchen table on a Sunday morning, sipping coffee and eating toast with homemade jam, and I am decidedly okay. It's still hard, but infinitely less hard, and it certainly isn’t hard all the time. In many ways, I feel better than I have in years.

And so when I sat down to write about my new adventures in dating, and I began to think about that woman in Woodstock whose words caused me to dread turning 30 because I knew that before I got there I would have to struggle, I realized that I was thinking about it all wrong.

Yes, this woman told me I would struggle. But she also told me that this struggle would change the way I see the world. She was right.

I’ve been forced to look at myself in a different way these last six months or so. I’m repositioning myself in my own head. Among my family. Among my friends. I’m taking a closer look at the stories I tell myself and the stories I tell those around me. The ones about who I am and who I will be. This is hard work. But it’s good work. Work that needed to be done. Work I’m not sure I would have had the guts to do if I hadn’t already been forced to wage some kind of battle in my own mind.

And this all ties into dating, a bit. Because dating is storytelling, really, when you get down to it. But what I really wanted to write about when I sat down to write about dating, I think, is the biggest blessing of this whole struggle-recovery mess: My family. My friends. The people who listen to my stories. Who help me to tell my stories. The old ones. The new ones. All the ones in between. I couldn't have done any of this alone.

Two of these lovely people are Jess and Mary, fantastic writers and tellers of stories in their own right. The first time I made this dish was for them. Thanks, ladies. 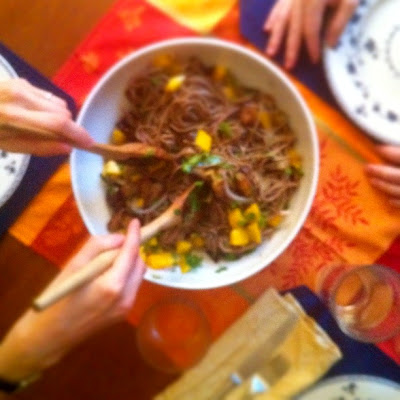 Ottolenghi’s Soba with Mango and Eggplant
From Yotam Ottolenghi's Plenty

It’s no secret that I love Ottolenghi’s latest cookbook PLENTY. And this noodle dish is the perfect summer meal: cool and light and packed with the bold flavors of sweet mango, salty eggplant, fresh cilantro, and nutty toasted sesame oil. I like to make the noodles and the dressing ahead of time, and then add the mango, eggplant, and herbs right before serving. It’s a colorful dish and the perfect backdrop for stories—the ones we tell ourselves and the ones we tell others, too.

First, in a small saucepan, mix the vinegar, sugar, and salt and warm it over medium heat for just 1 minute, until the sugar dissolves. Off the heat, add the garlic, chile, and sesame oil. Let cool. Then, add the lime juice and zest. Set aside.

Meanwhile, in a large pan, heat the sunflower oil and then shallow-fry the eggplant. Don’t overcrowd the eggplant—do this in three or four batches. Allow the eggplant chunks to become golden brown, flipping a couple times as they fry to get even color. When cooked, remove the chunks to a colander, sprinkle (generously) with salt, and let them drain.

Now, cook the soba noodles in a big pot of boiling, liberally salted water. They should be tender but still with a bit of a bite. This should take about 5 – 8 minutes. Drain, and rinse under cold water. Shake ‘em off, and then let them drain completely on a clean dish towel.

In a big serving bowl, mix the noodles, dressing, mango, eggplant, half of the fresh herbs and the onion. Let sit for a few hours. This will allow all the flavors to seep and meld. (I’ve also just mixed the noodles and the dressing at this point and let it sit over night, adding the rest of the components the next day. This works out well, too.) Just before serving, add the rest of the herbs, give it a mix, and enjoy.
Posted by Molly at 10:23 AM

Labels: dating is fun, jess and mary are the best, please excuse the grainy nature of this photograph i will do better next time i promise

You're the best, my friend. That's really all there is to it. xoxo

I'm just reading this for the first time! And I agree with Jess -- you are, simply, the best.

Thanks for your great information, the contents are quiet interesting.I will be waiting for your next post.
Four Trolley Rotary Rack Oven in India