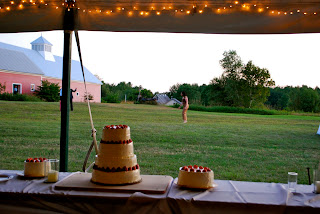 The first time I baked a wedding cake, I was in the middle of writing my book. I had been playing the role of a hermit, in fact, up at a writer’s residency in Woodstock, New York. Three days before the wedding I drove to Boston, baked the entire cake at my mother’s house in one go, and then transported it to Maine on my own. (Oy!). That cake was for Ashley and Colin, two of my dearest high school friends. It was four tiers of dense almond cake with layers of lemon curd and blueberry jam, frosted with a swiss buttercream. There were some dicey moments in the course of its construction, but I won’t hold back: it rocked. 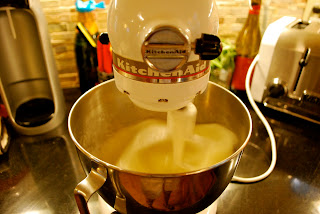 The second time I baked a wedding cake was last weekend. I baked this one over a couple of days—kitchen-time found after work, sandwiched among a handful of interviews about my book, and readings done plum across the state. What was I thinking? Who knows. 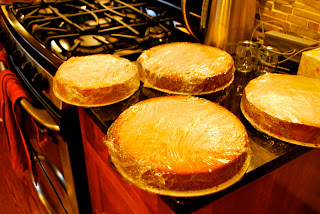 But I made this cake for the sister of another good friend of mine from high school, who likewise was married in Maine. I used the same almond cake recipe, except this time with layers of fresh strawberries and strawberry jam. I was more careful in my frosting, and used equipment a (tiny bit) fancier than a butter knife and my hands. I had Matt, who was in Afghanistan during my first wedding cake extravaganza, to help me transport the frosted layers north. Boom. 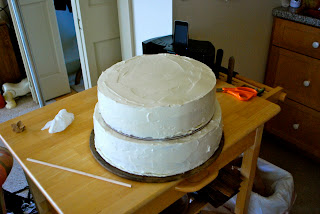 Though it means that I don’t have a new recipe here for you today, I’m glad that I repeated many of the elements of my first cake in my second. Making a wedding cake with limited time and a home cook’s equipment? It’s doable but, man, it’s also hard. Not hard in a heavy lifting or a cost cutting way, really. I struggled more with the volume. A wedding cake takes a lot of eggs, butter, and sugar. It takes a lot of time. 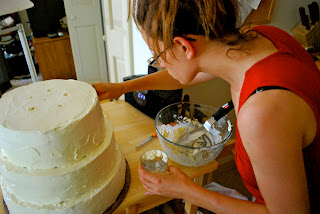 And the trouble with time? With time, I’ve learned, comes attachment. With every additional minute that I spent coaxing 14-inch cakes to bake in even lines, frosting not to curdle, and strawberries to balance just so, I became more and more invested in the life of this cake. And by the time I arrived in Maine, unloaded the layers, cut the dowels, and constructed the tiers, a lot of minutes, hours and days had ticked by. When I finished the second bout of frosting and my consequent painstaking progress in leveling and decoration, this cake felt like more than a cake. It was a living thing, an extension of my body, a 60-pound baby spun from my own hands. 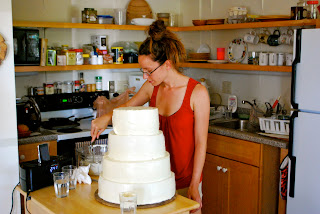 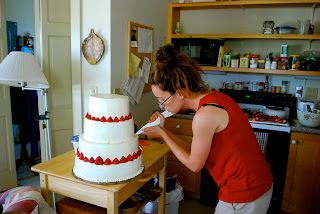 I thought about this a lot last weekend. Because as I baked my first wedding cake, I was in the middle of writing my book. I was buried in outlines and research; I had no idea where it would go. Back then, it was all about the creativity. It was all about forging new paths ahead. I was living in a miniscule studio in Brooklyn, had a boyfriend fighting a war in Afghanistan, and was using 14 pounds of almond paste to create a wedding cake in my mother’s kitchen with nothing but a couple recipes and a half-baked plan. If I could make and transport that cake, then of course I could finish my book. It was all about magical thinking. What surprised me is that it worked. 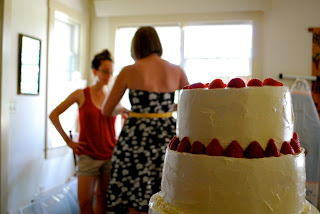 During this wedding cake experience, however, my book was done. More than done. It launched itself out into the world two months ago, a little living thing that I spun from scratch and then let go. I’ve struggled with the indisputable fact that so much about publishing is luck and circumstance, that way more is out of my control than I’d like. I baked my life into a narrative. I frosted it with reportage, chapter structure, and so many words. Then I put it on a platter and sent it out to be served. 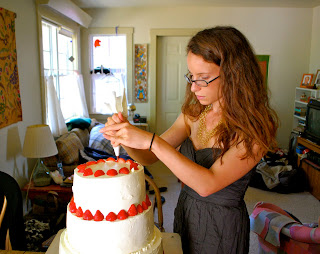 (Don’t get me wrong: Season to Taste has received some wonderful press. The events I’ve done, the responses I’ve gotten, and the people this book has touched leave me both honored and proud. It’s just all outside of my control.) 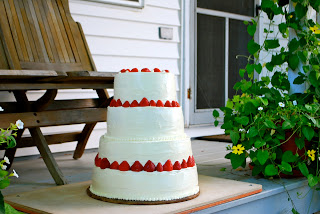 But when it came time to serve this second wedding cake, a series of circumstances conspired to form a distinct possibility that it would not be displayed at the reception before it was cut and devoured. That no one would see the constructed tiers, the smoothed out frosting, the strawberries balanced around its rim. Normally this wouldn’t bother the baker, as the baker is not usually present at the ceremony and reception. But I’ve known the bride and her family since I was a kid, and it was a delight to be present throughout. 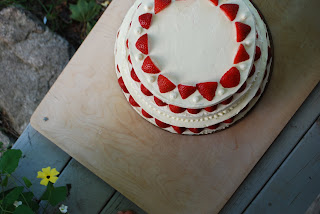 So I found myself standing on the porch of the farmhouse where the wedding took place, thinking about my cake. I could see the White Mountains in the distance, and the falling evening light. Why become so attached to something, some inanimate thing, when its course is left so up to chance? Why did I stress about the structure, the flavors, the timing of each and every piece when it was always possible that it could just languish in the house? 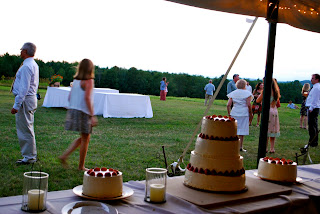 Later, when the sun had set, the temperature dropped, and with mosquitoes suddenly buzzing around our necks, Matt and I carried the cake out on a big wooden plank down to the tent filled with guests. With the help of the caterer, we cleared a spot on the table and let it sit. “The wedding cake!” I heard a little girl yell from across the dance floor. Some things are out of my control, but others, with a little effort, exist completely within. 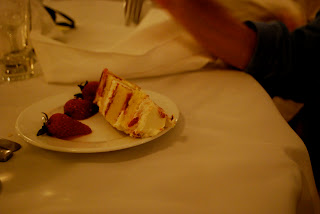 2 amazing accomplishments - a book and a wedding cake. You have much to be proud of! By the way, it was so nice to meet you at the book reading in South Hadley.

thanks, ladies. so glad i've been able to meet BOTH of you in person this summer. xoxo

You're a brave, brave almond wedding cake-making woman! It looks fantastic. I don't know how you pulled it off, being so busy, but I'm not surprised you did!

Looks gorgeous and delicious! It is a real art what you do!

Such a beautiful wedding cake. It becomes so much more than a cake because you aren't just baking with ingredients. You are baking with care, and love and wishes for a happy future and the more time you have to spend creating the physical manifestation of those emotions, the more is at stake. There is nothing more lovely than being able to plate up love!

Yes -- so true. This sums up so much of how I feel about baking wedding cakes -- as well as writing.

The last one I did I didn't set up myself (though they did a wonderful job) and nervously awaited the photos for hours. But there's really something about baking a wedding cake: tons of work, yet so satisfying; a little nerve-wracking, yet so fulfilling. I am trying to psyche myself up for doing -- gulp -- my own in about 6 weeks :)

A Plum: I don't even know how I managed to pull this one off. I'm still having strange, worried dreams about unfinished wedding cakes.

Amy: So true. Wedding cakes are always more than simply butter and eggs.

Nicole: Your own!! I cannot even imagine. Though I'm sure it will be phenomenal. Already can't wait to see pictures. xoxo

Molly,
I would like to request if you can expand your wedding cake Part I to include the recipe for 12'' and 14'' cakes please? I am in the process of seeing if I should/not bake my sister's wedding cake.

As per the title its look royal. If u all wish too ve such wedding cake on ur wedding day by visiting iwedplanner.

Baking a cake while writing a book – hats off to your multitasking skills, or should I say your ‘magical thinking’? I can’t imagine how you baked your life into a narrative, but how ever that is, it worked perfectly fine. That cake looks gorgeous and delectable and could be level with the works of professional bakers.
Jason Underwood @ La Patisserie