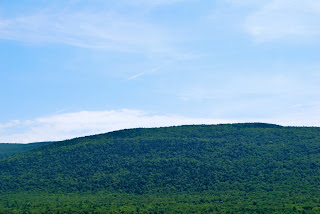 After a week filled with driving (Cambridge to North Conway, NH and back; Brookline to Portsmouth, and home) on Friday morning it was a relief to find myself climbing into an airplane instead of a car. Even if it was a tiny plane.
I had a reading scheduled that night in Manchester, Vermont, and so I flew from Boston to Rutland on an 8-seater—gripping my armrest, my seatbelt tightly cinched. As a kid, I never had a problem flying. But as the years have passed, my anxiety has grown. It’s not so bad that I won’t fly. I’m restless and curious and in love with travel. But I can’t seem to banish the few minutes of heart-palpitating fear straddling takeoff. This was no different. 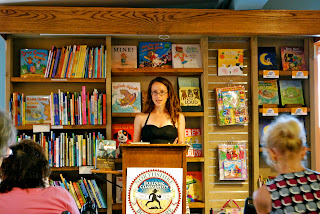 But I had never before been able to see so much of the flight process: how our little plane joined a line of jets waiting to take off, snaking around the runway one after another, pausing before finally blasting off into the air. When we launched into the sky, I could see the pilot pressing buttons, the plane clicking and bouncing, and the buildings of Boston parading below. I watched the land turn from open and farm-filled to tree-lined and hilly. By the time we reached Vermont 40 minutes later, I couldn’t tell if the scraggly white puffs on the horizon were snow-capped mountain peaks or a hazy expanse of clouds.
Manchester is a beautiful little town in southern Vermont. I arrived early and took myself out to lunch. Over the pages of Ann Patchett’s new novel, State of Wonder, I ate a salad filled with heirloom tomatoes, forest mushrooms, and seared salmon. It was hot out, as it was everywhere, and afterward I did some work in the frosty container of my hotel room. With the arrival of Matt, who had begun driving north from Boston as soon as he finished work, we headed out for my reading at the Northshire Bookstore, a huge and hugely wonderful independent bookstore in Manchester Center. 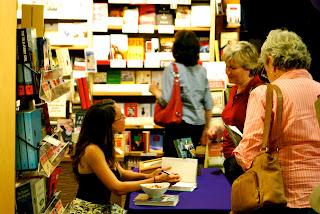 If I’ve learned anything in the last month, it’s that I love readings. I love going to readings. I love reading at readings. It’s been such a joy to meet so many of you interested in the sense of smell, in taste and flavor and cooking. I’ve been impressed by the questions asked and comments made by members of the audience. I knew that writing and publishing a memoir would be personal for me, but I didn’t realize how personal it would be for others. I’m humbled and inspired by the stories I’ve been told.
After the reading, Matt and I drove back to our hotel, and sat on the back porch with a tumbler of whiskey and a glass of white wine, respectively. We began chatting with an interesting couple sitting to our left. This couple was older than us, and before we even began speaking with them, I had been entranced by the way the evening light fell against the woman’s white hair, and the way that the two of them looked so in love. The next thing I knew the drinks had multiplied, it was close to midnight, and the time had come to collapse into bed. 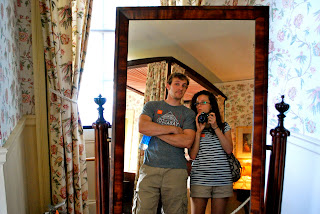 On Saturday Matt and I hit the road. Flying was fun, but driving has allowed us to explore. We meandered along back roads in Vermont, pausing to buy maple syrup and then, later, some cheese. We crossed over to New Hampshire, and slowly wound our way down to Massachusetts—all big trees, gravel roads, and muggy breeze along the way. Matt, a southern boy at heart, says he’s fallen in love with New England through all of the driving we’ve done. I tend to agree. 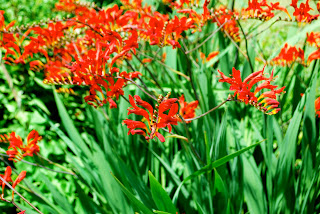 Molly, you look fabulous in the picture where you're reading in front of those books. The colors and lighting also makes it a great shot, but you look beautiful. Also like the one of the two of you in the mirror. Matt is rockin' the Tabasco shirt. :) John and I love New England, too. We attended a family wedding in the Northeast Kingdom in Northern Vermont two autumns ago and FELL IN LOVE. It's gorgeous and the people are terrific. Love your posts - keep 'em coming.

I know exactly what you mean about the fear of flying. You braved an 8-seater! I may have a chance to come to your reading next week in South Hadley. I finished your book and loved it. It would be great to see a fellow blogger.

I love a good road trip. And it's the best way to learn about the country. Will you ever be doing any readings in the Midwest?

Holly, Matt loves that Tabasco shirt :) And thanks for your sweet words. Vermont is gorgeous. Definitely in the summer, but especially in the autumn with all the beautiful colors.

Sharon, I'd love to meet you in person! Hope you can make it tonight. xo

Jen, I wish! Well, actually, I'll be in Detroit, speaking for their Health Awareness Day on November 4. Where are you?

You look fabulous in the picture where you're reading in front of those books!