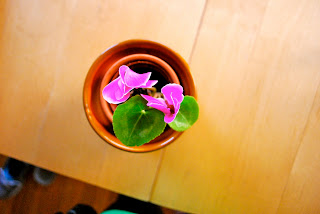 We’d been planning to move for a while.
Matt and I have lived in our apartment—a small but functional, noisy but beautiful Cambridge apartment—for a year now. We chose it quickly, on a lightning trip from New York City a few weeks before my lease in Brooklyn ran out and my book was due. This was in the hazy months after Matt returned from his deployment in Afghanistan and decided that, yes, he would go graduate school. The move back to Boston, the city where I was born, wasn’t surprising, but it still came as a shock. It’s not that I didn’t think Matt would be accepted to graduate school, or that once he was, he would decline. But he had filled out this particular application while wearing an Army uniform, serving his third tour of duty at war, this time in the mountains near the Pakistan border. That whole year felt surreal.
So this apartment? We made that choice fast. It’s a great place, but a tiny place. There’s a small bedroom, a living room with galley kitchen, a bathroom and a little closet. Sometimes the only thing I want is a room of my own. (Hi, Virginia.) 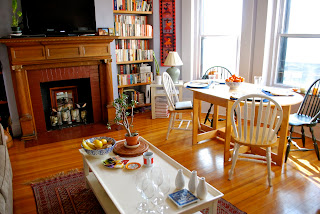 And so for the last couple of months, we’ve seriously entertained the idea of moving to an apartment a bit farther out and, therefore, a bit larger. I combed Craigslist ads and checked out big, rickety apartments in Watertown. I saw smaller, quirkier spots in north Cambridge. I met even met with a realtor, who drove me all around town, jangling keys, opening doors, and making me rethink my budget, my bank account, and my life.
Nothing felt right.
Last year when I first walked into this apartment, however flawed it may be, I felt something. What? I don’t know. A little whisper, tickling the fuzz on the lobe of my ear: This is a place I can live.
And so we’re staying. Right here. 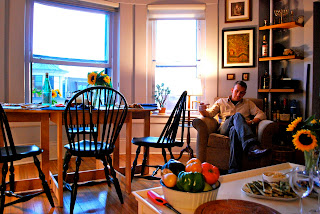 We’ve lived here for just one year, but it’s been a crazy year. This is where I finished writing my book, where Matt finished his first year of school. I’ve freelanced articles from the kitchen table and read countless novels on the couch. There have been wonderful times, horrible times, and a whole lot of dinner parties in between. Also: I can walk to work. Done.
With our decision to stay official, on Saturday Matt and I cleaned. Everything. We mopped, scrubbed, swept, vacuumed, dusted, reorganized, rearranged, recalibrated the entire apartment. We’re pretty tidy people, but, man, can grime build up. I’ve never been so happy to live in a small space. As it was, I was exhausted at the end of the day. If the apartment were any bigger? I might not have survived.
We emerged from the fog of Pine-sol and dish soap a few times for nourishment. Once, to eat slices of pizza that we had picked up earlier that morning at Iggy’s. Mine was topped with ramps, tomato sauce, and goat cheese. The crust was both billowy and crisp. Thank you, spring. 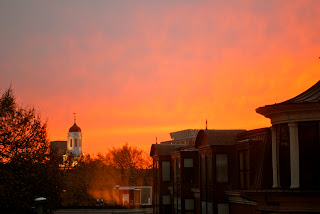 Later, much later, when the sun had far faded and our apartment was thoroughly scoured, I cooked. The oven was shiny and bright. The fridge, clean and clear. I cooked a simple dinner, because that’s all I could muster. I coated chicken breasts with flour, egg, bread crumbs and Parmesan and then fried them, lightly, on the stove. I simmered carrots with some water, salt, and a pat of butter, cooking them down until a glaze formed. And there were green beans—straight from the freezer to a pot of boiling water. Dinner should not have been that ridiculously good.
Later, we sat on the couch with bowls of chocolate ice cream, watching an old World War II flick. It was Saturday night; the sounds of young people cavorting on the streets outside trickled up through our windows, mixing with the pitter patter of rain.
It’s never felt better to be home. 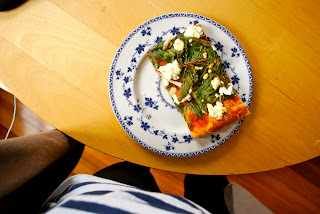 Molly, the picture of your apartment that features the fireplace is just awesome. Looks like something out of a magazine - and I noticed you have an amaryllis! Lovely. Glad you have closure and are going to stay. We are about to move to Germany this summer...let the chaos begin! :)

I'm so glad you wrote this post. It makes me feel better about our tiny one-bedroom with one closet and what seems like 0 storage space. I've been looking for bigger places but like you, nothing feels right, so we might just end up staying. And I'm slowly realizing that that's OK. xo

I love that place, as you know. Glad you're staying put.

the nuanced debates of city living: space v. charm, neighborhood v. grocery options, green space v. closet space...! I'm puzzling over the same thing in Beacon Hill right now. Wish I would have met you at ATK when we visited this week, I didn't realize you worked there!

Holly, many thanks! I love that fireplace, even though it doesn't work. Filled with candles and some strange candle-holding contraption that Matt and I found at an antique store in Tennessee, it's one of my favorite parts of the apartment. Also: Germany! Where? Matt lived in Germany for years. One of the best trips we've taken together was to visit his old home.

Jacqui: it's totally okay. What stories will we have to tell future grandchildren if we don't have tales about years lived like paupers in incredibly tight spaces, right? Or, at least, that's what I tell myself.

Erstwhiledear: I had no idea you were at ATK until just today! (I work on a very specific project in a very remote section of the building, alas). But, man, I hope you had fun. The taping that's been going on is pretty crazy, no?

Your place looks so lovely! I totally understand where you are coming from though. I have a little cottage that I'm in love with but it's way too small and my studio is shared with the washer and dryer. Not very glamorous. However, nothing else feels right so it looks like I'll be saving up and putting an addition on. I should also mention that I'm so pleased about the success with your book! The publisher is sending me a copy and I can't wait to read it!