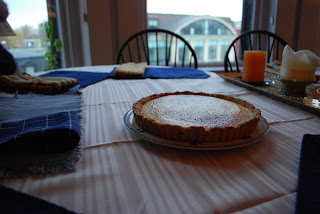 On Sunday night Matt and I threw a dinner party.  There were eight guests in total.  They trickled into our home in twos and threes soon after dusk, and we crowded around the two tables pushed together in the center of the living room floor.  It was a big crowd for our already small apartment, which seemed immediately to shrink in size. 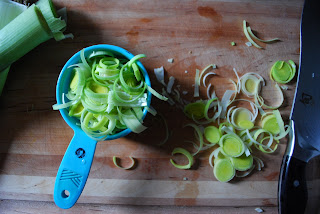 Most of our guests were friends of Matt’s from graduate school.  They came along with their husbands, wives, or dates, and, in one case, the cutest one-year-old little boy.  Many were in the military—active duty officers who have, like Matt, been deployed to Iraq or Afghanistan or both.  Even though I’ve been with Matt for three years, including a yearlong deployment to Afghanistan, and have been spending inordinate amounts of time thinking about the military, about military families, and what it means to serve, I will admit: I was intimidated.  What do you cook for a group of people who have done so much?  Who have seen things I can hardly imagine? 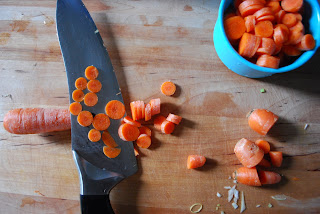 As it turns out, I cooked what I would normally cook for an overwhelming number of people crammed into a small space: dishes easy to make ahead.  Butternut squash soup.  Coq au vin.  An arugula salad and a bunch of crusty bread.  To finish: a lemon tart and a plate of chocolate bouchon. 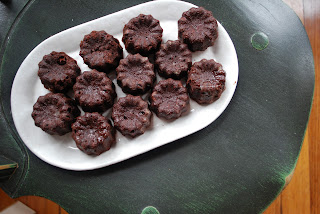 As I sit here writing this post now, days later, I’m thinking about why, exactly, I felt so intimidated by this dinner party.  In the week leading up to it, I focused my anxiety on the menu.  But I’m pretty sure that wasn’t it.  After all, I’ve cooked for that many people many times before.  I've cooked all those dishes before.  But never for so many veterans.  Not for their families, too.  And as today is Veterans Day, I think that’s something important to address.
My experience of war and deployment has been a solitary one.  When Matt was in Afghanistan, I lived alone in Brooklyn.  A hip neighborhood in Brooklyn.  As far from the front lines as one can go.  I’m almost embarrassed to say that before I met Matt, I knew no one who had fought in these wars, which have raged now for almost a decade.  I know I’m not the only one.
Until we moved to Boston where Matt met several fellow students from the Army, I had never spent any time around a military community.  I’d never really met people who understood the ups and downs of deployment, the triumphs and struggles of those who serve.  And for all of my talk about the disconnect between those in the military and civilians in America today—I wrote a little about it here; there have been other great articles published, like this one here—there I was, embodying that very separation with my jittery nerves.  I mean, these men and women are warriors.  They have experienced things I cannot comprehend.
This blog isn’t about the distance between the military and civilians during these wars, I know.  It’s about food and smell, and the memories and pleasure that come from them both.  But this is universal: there is little better than a group of people who feel connected, sitting around a table full of food.
And, as it turned out, there was nothing for me to worry about on Sunday night.  Everything went well.  The food was good and the company, even better.  Our guests were a hilarious bunch, really.  I can’t remember the last time I laughed so hard.
I’d like to write about all of the recipes from that night, because I love every single one.  Maybe I will sometime soon.  But to start: the lemon tart.  It’s a simple though intensely flavored dessert that I’ve made countless times with a recipe from Thomas Keller’s Bouchon.  The crust, which is made of pine nuts and butter, comes together easily in a Cuisinart.  The filling, a tart and creamy lemon sabayon, takes some arm power and a whisk, but ends up a beautiful pale yellow, light as a cloud. 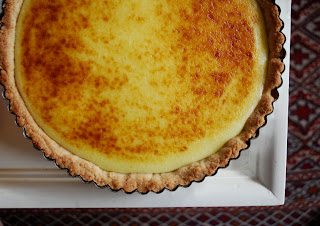 Pine Nut Crust:
You will only need one third of the dough from this recipe.  But with only one egg, it's hard to reduce the quantity of the finished product.  Freeze the extra for another time.
10 ounces (2 cups) pine nuts, (I toasted mine in a dry skillet beforehand)
1/3 cup sugar
1 pound (3 cups) all-purpose flour
8 ounces unsalted butter, room temperature
1 large egg
1 teaspoon vanilla extract

For the crust:
In a food processor, pulse the pine nuts a few times.  Add the sugar and flour and continue to pulse until the nuts are finely ground.  Transfer to a large bowl.

Add the butter, egg, and vanilla extract and mix to incorporate all the ingredients (either by hand or with the paddle attachment in an electric mixer).  Divide the dough into three equal parts and wrap each in plastic.  Refrigerate for at least 10 minutes before using.  The two extra dough bundles can be frozen for up to a month.

Preheat oven to 350 degrees Fahrenheit.  Butter and flour a 9-inch tart pan with a removable bottom.  Refrigerate the pan while the oven warms up.

Remove the tart pan from the refrigerator.  Using your fingertips, press the pine nut dough evenly over the bottom and sides of the pan.  Trim off any excess.

For the sabayon:
Bring a couple inches of water to boil in a pot that is just slightly bigger than the bowl in which you plan to make the sabayon. Meanwhile, in a large metal bowl, whisk the eggs, yolks, and sugar for 1 minute, or until smooth.

Set the bowl over the pot of boiling water and, using a large whisk, whip the mixture while you turn the bowl (for even heating).  After about 2 minutes, when the eggs are foamy and have thickened, add one-third of the lemon juice.  Whisk vigorously.  When the mixture thickens again, add another one-third of the juice.  Whisk until thickened.  Add the final one-third of the juice.  Continue to whisk vigorously, still turning the bowl, until the mixture is thick and light in color and the whisk leaves a trail in the bottom of the bowl.  This should take around 10 minutes total.

Turn off the heat but leave the bowl over the water.  Whisk in the butter, one piece at a time.  If the sabayon loosens, don't worry: it will thicken as it cools.  Pour the warm sabayon into the tart crust, and place on a baking sheet.

Preheat the broiler.  While the sabayon is still warm, place under the broiler.  Keep a very close watch, leaving the door open and rotating frequently for even browning.  This will only take a few seconds.  Remove the tart from the oven and let sit for at least an hour.  Serve at room temperature.
Posted by Molly at 8:10 AM

Hey! I think I know the pan the pan in which those bouchons were baked :) Everything looks yummy and glad to hear the evening went well.