On Anxiety, and Pie

Yesterday I wrote a piece about a pie.  It was a cute piece about Thanksgivings growing up and the mornings my father let me eat leftover dessert for breakfast as a little girl.  I had planned to post it here last night.  It included my favorite recipe for pumpkin pie, which I baked after running the half marathon last week, and then again the other day.  (It’s really that good.  I swear.)  Sweetened with maple syrup, the filling is creamy and light.  The crust is crunchy and thick with butter.
But then I had an anxiety attack.  Sitting at the table after dinner, my heart began to beat quickly.  There was a shooting pain in my left shoulder and arm, and I felt like I couldn’t breath.  I’ve never experienced anything like that before.  Terrified that something was terribly wrong, that my heart would explode, I waited for it to pass.  And it did.  Today I’m totally fine.  But there it is.  The anxiety is back.
Last year I was anxious all the time.  For good reason.  Matt was in Afghanistan and I was on deadline writing a book.  I was terrified that Matt would die, and that my writing was no good.  I felt positive that when Matt came home and I turned in the manuscript, I would never have anything to worry about ever again.  Ever!  Again!  My inner monologue would never raise its staccato pitch; I’d never wake up at 3 a.m. with that wild low thrum in the back of my mind.
Well, I was wrong. Duh.
I don’t know exactly what I’m anxious about right now.  I’m pretty sure that it involves finishing one project and beginning something else.  It probably has to do with living in a new city, around new people, doing new things.  There are the usual distractions: money and health insurance, therapy and exercise and love.  But when it comes down to it, I’m living in Boston with my boyfriend, who is safe and sound and whom I love.  My book is available to pre-order on amazon.com and my family is healthy and close.  I make a mean pumpkin pie.  I’m really lucky, I know.  But I’m also anxious.
And I thought I’d write about this rather than my memories of Thanksgivings past.  Not because I have a solution or even a plan for these feelings. There’s no tidy ending in sight. But after the wonderful things that have happened to me in the last two years - regaining my sense of smell, writing a book, Matt’s safe return from war - I’ve felt like my life has been neatly wrapped.  I was hurt and I recovered.  I was scared and now I'm safe.  Sometimes I feel like I have been tied so tight with a pretty pink bow that there is no more room for hurt or pain, confusion or anxiety.
At least there’s always room for pumpkin pie. 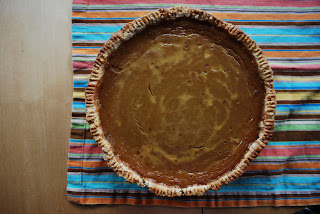 Maple Pumpkin Pie
Adapted from Gourmet
Pastry Dough
2 cups all-purpose flour
1 ½ teaspoons salt
1 ½ sticks cold unsalted butter, cut into bits
7 – 8 tablespoons ice water
Whisk together the flour and salt in a large bowl.  Using your fingertips, quickly blend in the butter until the mixture resembles a course meal.  Add the ice water, 1 tablespoon at a time, tossing with a fork or your fingers to combine, until the mixture begins to form a dough.  Pour the dough out onto the counter, and smear is around with the heel of your hand in a few forward motions to bring it together. Form into a ball and flatten into a disk.  Wrap in plastic and chill for at least an hour.
Filling
1 cup maple syrup (Grade B suggested)
2 cups canned pumpkin
1 tablespoon cinnamon
1 ½ teaspoons ground ginger
½ teaspoon salt
1 cup heavy cream
2/3 cup whole milk
2 eggs
Remove the dough from the refrigerator.  On a lightly floured surface, roll it out with a rolling pin into a thin disk, a few inches wider than the pie plate you plan to use.  Place in the pie plate (I used a 10-inch), and then shape and crimp the overhang into an even decorative edge.  Chill in the fridge for 30 minutes.
Preheat the oven to 375 degrees Fahrenheit.
In a heavy saucepan, gently boil the maple syrup until a small amount dropped into a bowl of cold water forms a soft ball, which is around 210 degrees Fahrenheit on a candy thermometer.  Let cool slightly.
In a bowl, whisk together pumpkin, cinnamon, ginger, salt, cream, milk, and eggs.  Then, whisk in the maple syrup.  Pour into the pie shell.  You can brush the edge of the pie dough with an egg wash here—one egg yolk whisked together with a tablespoon of water—if you want.
Bake in the middle of the oven for one hour, or until the filling is set but the center still shakes slightly.  (The filling will continue to set as the pie cools)  Transfer to a rack to cool completely.
Posted by Molly at 8:07 AM

Molly, thanks for the post. That's the thing about anxiety - it doesn't follow the rules. Even when life looks really good, it can sneak up at odd moments.

I've been feeling rather anxious too. It will come for no reason and it's completely debilitating. But it always ends and then I'm free. I hope you get some relief too!

Molly - I'm a fan of your site - I enjoy your writing a lot. There is an article in today's SF Chronicle that might interest you on the lovely chef Carlo Middione who lost his sense of smell after a car accident. http://www.sfgate.com/cgi-bin/article.cgi?f=/c/a/2010/10/28/DD921G1Q4A.DTL&type=food

Oh how I wish anxiety would follow some rules, Josephine. But it definitely sneaks up at odd moments. Sigh.

Amanda, I'm sorry that you're in and out of anxiety, too. I'm happy to report that just writing about mine seems to have helped!

Lindy, Thanks for the article. It's sad to hear that the chef closed his restaurant, though I do understand why. I'm glad he's still cooking, though...

Since I read your article "Scent Of The City", I feel I have a bond with you. Everyday is scentless and tasteless for me and I know you understand.
.
I will be cooking a feast for Thanksgiving. The first year after my accident in 2007 I was nervous. With the help of my son "The taste-man" who is a very "honest man" and tells it like it is, I manage to get delicious reviews.
We have communicated with e-mails. I am looking forward to reading your new book.
Have a wonderful Thanksgiving Holiday.

OOOOPS Molly, I am anonymous! I must have filled out the info wrong.

Joanne, so good to hear from you here, and much luck with your Thanksgiving feast. I'm glad your son is a good help! xo