On Saturday night, Matt and I threw a dinner party. All of our guests were graduate students. Some were there to break the Yom Kippur fast. Others, simply to celebrate an early autumn night away from school. At one point I realized that I was the only person in the room without an incomplete problem set looming over my head. (And I will admit: this I enjoyed.) 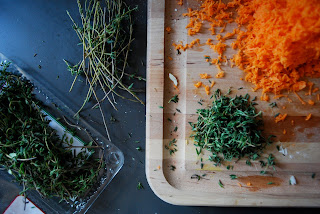 I cooked a lot for this party, beginning early that day. There was an heirloom tomato tart with caramelized onions, olives, and capers on puff pastry with edges a crisp golden brown. Short ribs braised in red wine, served over polenta creamy with butter and cheese. An intensely chocolate tart. Whipped cream. 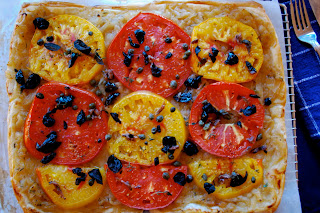 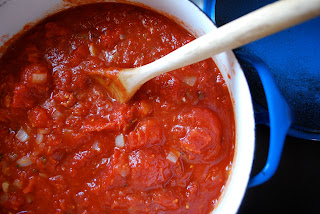 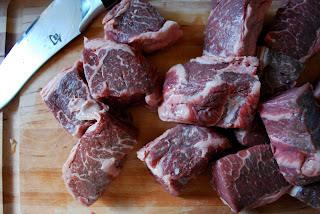 That morning I relished the quiet hours bent over the stove with a wooden spoon, chopping onions on the counter, melting chocolate in a deep glass bowl in order to make a glaze. It was a beautiful day, and the kitchen was full of light. I concentrated on the colors and the textures of my ingredients. The clanking sound of fork and knife, the sizzle of meat in the pan. The slow, low scent of butter, sugar, and chocolate as the tart baked in the oven. There were moments, here and there, when I was sure nothing had been so vivid as the orange of that grated carrot, the smoky smell of that rib as it seared. The thought came often and unbidden: I love to cook. 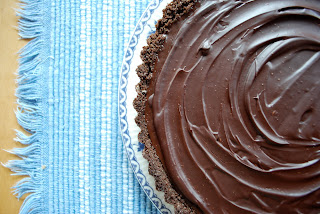 As people filtered into our apartment, which glowed in the dusky light of gloaming around 7 p.m., we began by drinking red wine and sampling homemade hummus, scooped onto strips of the flatbread covered in za’atar that I had baked that afternoon, filling the kitchen with the scent of the Mediterranean, of the Middle East.

The chatter, the laughter, the taste of cumin and chickpeas lingering on the tongue—that’s when I remembered that even more than cooking, even more than the solitude of the senses at the stove, what I really love isn’t to cook: it’s to feed. I love when friends and strangers come together around a table laden with food. There’s nothing better over which to bond. There’s nothing more like home. 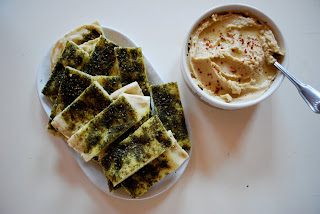 Flatbread with Za’atar
Adapted from Spice, a lovely cookbook by Ana Sortun

In the bowl of an electric mixer, combine and whisk the yeast and warm water. Let stand for around 10 minutes, until it begins a gentle bloom of foam.

Whisk in the ¼ cup olive oil and then the flour with ½ teaspoon of the salt.

Using the mixer’s paddle, stir on low speed until the flour is combined and a dough forms. Switch to the dough hook, and mix on medium speed for 7 – 8 minutes, until the dough is still sticky to the touch but stays on the dough hook in one piece.

Lightly oil a large bowl (glass or stainless steel) and put the dough within. Cover with plastic. Chill in the refrigerator for at least 2 hours, or overnight. The dough should double in volume.

Two hours before baking, place the dough and 2 tablespoons of the extra virgin olive oil onto a baking sheet and cover again with plastic. Let it rest and rise for 1 ½ hours at room temperature.

Press the dough onto the baking sheet, using your hands to stretch and pull. It should make a flat 10x12-inch rectangle. Make dimples in the dough with your fingertips and brush it all with the remaining olive oil. Sprinkle the za’atar evenly over the entire sheet of dough. And then with ½ teaspoon salt.

Bake for 15 minutes, until golden on the edges and cooked through in the center. Serve warm. Preferably with hummus. 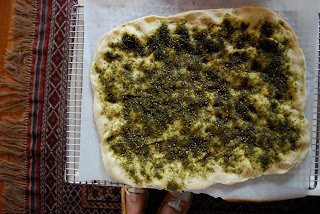 *I bought a container of za’atar—a Middle Eastern spice blend that includes the dried herb of the same name, which is a very green type of thyme, as well as sumac, sesame seeds and salt—at one of Ana Sortun’s restaurants, Sofra. Sofra, unlike Sortun’s first restaurant, Oleana, which is fancier dinner spot that I’ve also been to and love, is a causal bakery on the Watertown/Cambridge line. She serves breakfast and lunch foods, some of the best baked goods I’ve ever had. The last time I was there I couldn’t resist buying some of her spices – za’atar as well as a small container of Aleppo chilies. I have put them to good use.

Wow, this looks delicious and this is a great post! I really enjoyed it and will be following your next posts and recipes :)
City Girl x
http://citygirldiariesec1.blogspot.com/

Glad you stopped by!

I just picked up some za'atar from Penzey's last month and have been waiting for a good way to use it! Fabulous!

Ooh, Penzeys. I've never been, but it's on my list of places I want to go, stat.

Molly, lovely post. Your love of cooking - and feeding - is evident. How I would love that menu tonight!

Also: YES. I am exactly like you re cooking/feeding.