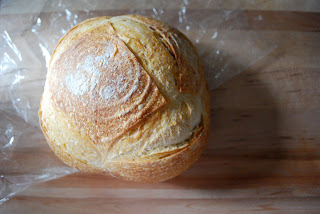 Laurie Colwin writes about her first New York City apartment in the essay "Alone in the Kitchen with an Eggplant." Hers was a tiny studio that fit a twin bed, a night stand, a small desk, and a wicker chair. The kitchen consisted of a metal counter, a little refrigerator, and a hot plate. "The ceiling was fairly high - a good thing since a low one would have made my apartment feel like the inside of a box of animal crackers," she writes.

I reread this essay a number of times last year, while living in my own miniature New York apartment alone. Mine was in Brooklyn, not Greenwich Village. I had an oven and four burners on my stove. But, like Colwin, I had very little room. Just enough space for a bed, a desk, a chest of drawers and a little folding table that pushed nicely up against the window. My bathroom couldn't fit a sink; the kitchen one had to do. "Many thought I must be insane to live in so small a space," Colwin writes, "but I loved my apartment and found it the coziest place on earth." Me too.

In her essay, Colwin writes about what she ate while she lived in that breadbox apartment alone: soup, spaghetti, eggplant in all forms. One time, her mother gave her a toaster oven to augment the two-burner stove. "I began with toasted cheese," Colwin writes, "that staple of starving people who live in garrets." I love the word garret. It reminds me of home.

Sunday afternoon in Boston was rainy and cool. Sitting in my new apartment, which is much bigger than any place I've ever lived before, I thought about Colwin, about coziness, about toast and cheese. I began to miss my cramped studio in Brooklyn, the one that kept me so snug while Matt was in Afghanistan, the place where I made many solitary meals, where I carved a life on a very limited budget alone. Then, I ate a lot of toasted cheese. Suddenly, I wanted more. 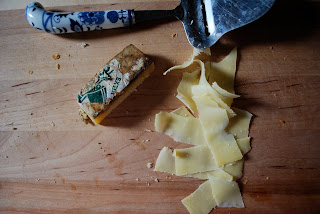 I find that toasted cheese is best made in the oven, on fresh crusty bread. I like to eat it with just a little sprinkling of Worcestershire sauce, like my mother used to make me as a child. Yesterday I sliced a sourdough loaf from the farmers' market and shaved some Gruyere off a thick hunk I had been saving in the fridge. I ate it alongside a mug of coffee, over a well-worn copy of a good book. 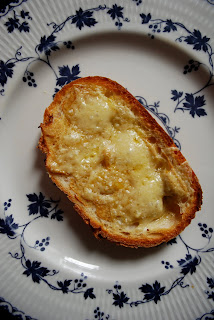 hi molly! Your rainy Sunday sounds so cozy. I had a similar day myself, yesterday; it's nice to have the rain back for a bit. I've been meaning to ask since you arrived in Cambridge: Have you been out to Russo's in Watertown yet? It's heaven. Heaven! (Except on a Saturday, when it's total shopper gridlock. Beware.) When I walk in there, the smells take me to Paris immediately - the rotisserie chickens, i guess. Anyway, I'll stop gushing about it. But if you do make it there, let us know! Or I'd be thrilled to be your tour guide, if just to have the excuse to make the trip over from JP, as if I need it :)

Hi Jess, Yes! I've heard of Russo's, but never been. It sounds awesome, and I definitely need to plan a trip to go. I'd love a tour guide. Shoot me an email and we can totally make that happen!

This makes me smile. I read Colwin's book this weekend, too. I focused on the same section on eggplants, made roasted eggplant puree, and wrote about it. I just haven't posted it yet. You never know who in the world might be doing something just like what you are on some anonymous Sunday.

Carrie, I love that - must have been some Colwin karma floating around this weekend.

Fantastic (re: joint outing to Russo's)! Life is a bit hectic at the moment, sorry for the delay in getting in touch, but I will email you soon to make a plan.