Bread that Needs no Kneading

The streets were always empty in the chilly pre-dawn hours as I drove to the bakery. The headlights of my car illuminated the street signs, the highway's concrete divider, the brambled bushes lining the back roads. Every morning the radio quietly hummed the news, a metal carafe of coffee steamed in the cup holder by my side, sleep lay heavily in my eyes – I felt as if I were the only one awake.

It was the summer before my freshman year of college and I was working as an assistant pastry chef near my home in suburban Massachusetts. I stumbled into the job not knowing much - my first experience in the professional food world - and left with an ingrained set of culinary skills that have stuck with me ever since. I frost a mean cake, let me tell you.

When I walked into the bakery around 5am each morning, the day’s crop of bread was just emerging from the oven. A result of the night baker's toil, the boxy brown loaves cooled on movable metal shelves until the front doors opened to customers at 7. The muffins and croissants would soon go into the oven, along with the cakes and pastries and scones. The construction of sandwiches and soups was imminent. But at that first moment, right when I arrived and stood talking to the head baker about the day’s work, another cup of coffee cradled in my hands, the room was filled with the scent of pure, unadulterated, overwhelming bread. It was an important part of my daily routine and I loved its warm, sweet aroma - the earthy undertone of yeast. It smelled of the sunlight peeking slowly through the bakery’s window as the day began; the taste of chocolate cake; the feel of puff pastry dough; the fear that lurked constantly in mind with thoughts of my impending college career. It was a scent that made those very early mornings worthwhile – and for a time in my life when I was not so overly food-obsessed and was often out late at night with my high school friends as we shook off those last vestiges of childhood – that says a lot.

When my sense of smell was damaged in the car accident, about 14 months ago now, it was incredibly difficult to come to terms with some of the specific aspects of that loss. The scent of fresh bread being one of them. As my olfactory nerve has healed, certain scents that mean a lot to me have come back with relative haste – rosemary, chocolate, wine – but bread had yet to reemerge.

Yesterday, however, I sat at my kitchen table with a good book (Mark Helprin’s Freddy and Fredericka), a mug of tea (green-ginger), some good music (Elvis Perkins, a recent discovery) and I could not stop sniffing the air. Like a great many others, I had been inspired by a recent recipe in the New York Times: the Sullivan Street Bakery’s no-knead bread. It was in the oven and my apartment smelled like the bakery – sweet, nutty, warm. There was even, perhaps, an undertone of puff pastry and sunlight. 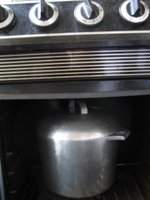 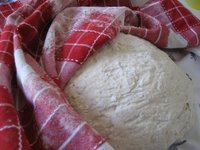 The bread itself was shockingly easy to make. On Friday I had tossed some flour, water, yeast and salt into a bowl. Saturday afternoon I threw it (in a pre-heated, covered, cast iron pot) in the oven. And when I removed the it 50 minutes later, there was a beautiful, crusty brown loaf. I cut myself a large slice (not waiting nearly long enough for it to cool... I have very little patience in matters of tasting freshly baked things), slathered it with butter (Lurpak is delicious) and took a bite. It was damn good. For half of its baking time the bread is sealed in a heavy pot and with the steam amassed, the ending texture is wonderful - crackling crust on the outside, soft and fluffy within.

The easiest recipe I have ever come across produced some of the best bread to ever exit my oven. The world works in strange ways. 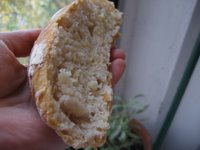 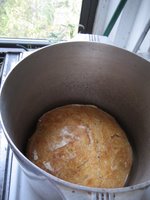 photos above: the final rising of the dough; my oven swallowing the pot of bread as it baked below: bread in a pot; bread in my hand.

One unseasonably warm day last week, as I walked from my office to the subway in midtown Manhattan, I passed a large pile of trash bags. They were full, stacked on top of each other on the sidewalk, and waiting for the garbage man to take them away. As I maneuvered around them I was suddenly overwhelmed by scent. It took me a moment to recognize what, exactly, I was smelling. (It’s been over a year since my olfactory receptors could register anything unpleasant…) But I stood still for a moment, my nose twitching as I sniffed the air. The stench of rotting trash will probably never again bring such a joyous smile to my lips.
Posted by Molly at 8:03 PM

Another wonderful post, Molly, about enjoying simple--even odd--pleasures. Your [temporary, probably] appreciation of the rotting garbage smells reminds me of trips to New Orleans. Walk down any street in the Quarter and every 50 feet or so, the aroma goes from fabulous cooking smells to garbage to cooking to garbage...