My roommate Jon and I are slowly recovering from this weekend's protracted culinary binge . We began Saturday morning, on a three-hour-long quest for groceries. We walked from our apartment, shiny with sweat after only a few steps in the sun, down to the farmer’s market in Grand Army Plaza—a vibrant weekend community of farmers, Brooklynites, red and yellow tomatoes, magenta beets, light fuzzed peaches and a phalanx of baby strollers. We spent a good deal of time poking around the piles of fat eggplants, mounds of green beans and stalks of scallions as we discussed cooking ideas and menu options. We loaded up bags with New Jersey tomatoes—their bulbous knobs ready to explode with summer-ripe red juice—a green pepper, thick-peeled red onions and cucumbers. The farmer manning the counter at this particular stand—lean and tan, white hair offsetting a youthful smile—threw in a free serrano pepper, grinning as we awkwardly hefted the eight pounds of tomatoes off his table. Soon we added bags of peaches, blueberries and plums, carrots and beans, fingerling potatoes, tiny tomatillos and a few loaves of fresh sourdough bread. When we finally left the market I felt as though I were carrying hundreds of pounds of produce, the bags literally hanging off of every balanceable body part. And when we arrived home, fingers permanently creased from the weight of grasping the heavy bags, we sat on the couch and stared at mounds of beets and broccoli, varying shades of carrots and onions, yellow plums, baskets of blueberries and sprigs of cilantro, slightly in awe of our lack of farmers market self control. Piled together and against the backdrop of our red brick (nonworking) fireplace, the vibrant colors and earthy vegetal shapes of our purchases were beautiful.

“If only we had some 17th-century Dutch artist living here,” Jon said, “Just imagine the still life paintings we would inspire.”

We were serenaded by Tom Wait’s familiar growl as we spent the afternoon blanching and peeling our bucket of tomatoes, chopping a few cucumbers, red onion and green pepper. Together with a hefty dose of garlic, olive oil, cilantro, white wine, lime juice and that (free) serrano pepper, I used the immersion blender in the largest soup pot we own to turn that tumult of vegetables into a smooth soup. Salt, pepper, and later garnished with avocado, onion and cilantro—it was an easy, cooling gazpacho with just a touch of crunch and spice. Friends slowly streamed in at the latter end of our prep work, sipping wine and experiencing the wonders of goat gouda and roasted tomatillos on bread.

Three fans collectively aimed into our kitchen made the summer heat somewhat bearable while we roasted our bi-colored carrots (yellow and orange), later tossed with the light crisp of chopped scallion. Steamed green beans, coated with a sweet balsamic vinaigrette, were cooked way ahead of time to be served cold with a pair of metal tongs. Jon had been inspired by a pilgrimage to a local Middle Easter grocery store to marinate our filets of blue fish with tangy green olives, preserved lemons, cumin, coriander and olive oil. Roasted, the soft fish was infused with deep flavor.

Last week, when Jon and I decided to throw this dinner party, I unearthed my ice cream maker from the back corner of my closet, somewhere behind the pasta roller and yogurt machine, under a pile of sweaters, sadly unused throughout this sweaty summer. And Saturday morning I went straight to work, heating cream, milk, vanilla and a bit of sugar in a heavy saucepan to a quiet simmer. In another bowl I whisked ten egg yolks—I love the slick feeling of the whites sliding through my fingers as I separate the yolks in the palm of my hand—with more sugar, until frothy and pale. After tempering the yolks with a bit of the hot cream mixture, I put it all together on the stove, stirring constantly as the custard thickened. Later that evening, the sound of the ice cream maker’s mechanical churn melded with the soft tunes of Leonard Cohen. The finished ice cream was a thick and off-white, smooth and rich, cold and creamy. It went perfectly with my peach-blueberry freeform galette (an old, favorite recipe which I’ve made and tweaked so many time I’m not even sure from where it began), the dough of which I rolled out with the help of an old wine bottle. When I pulled the tart out of the oven, fruit bubbling its thick syrup amid a deep brown crust, it smelled sweet and warm, faintly of cinnamon.

In an amazing feat of acrobatics—inspired by an apartment so thick with heat you had to practically swim through the air and, perhaps, a glass of wine or two—we brought our feast up to the roof. We handed shopping bags of bowls and plates, forks and knives, one heaping dish at a time to waiting hands, a chain of hungry people balanced on the precarious ladder, hefting food and people in awkward lunges through the hatch-like rooftop opening. Once up there, though, we perched on a picnic blanket, plates resting on our laps, and the sound of laughter reverberated out over our quiet, humid neighborhood streets. A clear outline of the Manhattan skyline gleamed in the distance—its light a deceptively still backdrop to an active evening of cooking, eating and a general raucously delicious time. 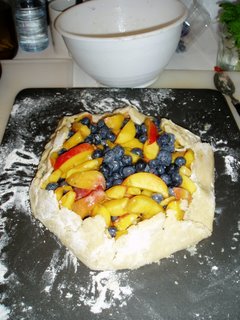 Mix the flour, cornmeal, salt, sugar and butter together—I use my fingers to work the butter in with all of the dry ingredients. And then add the water, one tablespoon at a time, until the dough comes together. Wrap in plastic wrap and chill for at least an hour.

For the filling, slice the peaches and mix with the blueberries, sugar, flour, cinnamon and lemon zest in a bowl.

Preheat the oven to 400. And when ready, roll out the dough into a large circle. Place it on a piece of wax paper, on a cookie sheet, and then put the filling in the middle of the dough-circle. Carefully fold the overhanging sides of dough up over the edges of the fruit. Lightly brush the visible dough with the egg yolk and water mixture and sprinkle a bit of additional sugar on top. Bake (making sure to place tin foil or another pan underneath to catch the liquid overflow) for 30 minutes, until golden brown and bubbling.
Posted by Molly at 10:55 PM

You said you would post yesterday and so you have. You are a woman of your word. And the fact that you could lift your arms to the keyboard after all that other lifting is truly a show of force by your guns…

I used your recipe to make the galette last night, and it was heavenly. Thanks for the inspiration!